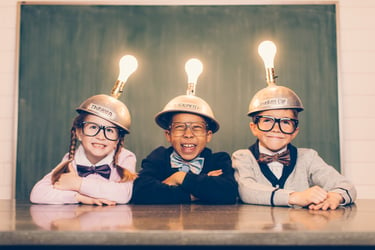 As more and more baby boomers enter their senior years, suggestions on how to improve neurological health seem to be gaining in popularity. With this recent surge of interest in optimizing brain health, we may lose sight of its relevance in children. Yes, aging adults may experience a decline in cognition, memory and learning, but the neurological development that occurs in an infant’s first few months of life is nothing short of amazing. Also, laying the foundation in the early years for strong neurological connections only benefits us later in life. Therefore, considering the impact of diet and the environment on children’s brain health is as important, if not more important, than in the elderly.

One key nutrient that has been shown to foster neurodevelopment in children is docosahexaenoic acid -- or DHA for short. DHA is a long-chain, polyunsaturated, omega-3 fatty acid. It is commonly found in oily fish (such as anchovies and salmon), blue crab, white tuna, large eggs, large shrimp and chicken. Although the human body can also naturally synthesize some DHA, you’ll still have to consume it directly -- either from foods or dietary supplements -- in order to meet daily requirements.

But why exactly is DHA so important for children? As earlier stated, DHA plays a tremendous role in the neurological development of infants and toddlers. Specifically, it aids the development of the brain and eyes, and consequently enhances cognitive function and learning behavior.


The process of brain development is pretty rapid after birth, so much so that by age 2, the size of an infant’s brain is already about three-quarters of the adult brain. Within the first year alone, the brain undergoes a 175% growth. Another 18% growth takes place in the second year and only an additional 21% growth takes place from age 2 till adulthood. But here’s the amazing part-- this growth is fueled by DHA.

The buildup of DHA in the brain provides an essential building block for cognitive, emotional, social and behavioral development in children. According to a study published in the journal of Clinical Epidemiology and Global Health, children with higher levels of DHA tend to exhibit higher cognitive, language, motor and information processing skills as they progress from infancy to young adulthood.

In another study published in PLOS-One Journal, the researchers observed that previously under-performing children -- aged 7-9 -- showed a considerable level of improvement in reading, memory and behavior after being placed on a healthy diet that contained 600mg of DHA per day.

But, here’s a quick note -- the importance of DHA goes way back to the time of pregnancy. About one-third of an individual’s brain development takes place during pregnancy -- especially in the third trimester. So, it’s very important for pregnant and breast-feeding women to get adequate amounts of DHA to ensure the optimal brain development of their babies.

May Support Children with ADHD


Attention deficit hyperactivity disorder (ADHD) is a condition characterized by impulsive behaviors and difficulty in concentrating. And it has been commonly linked with DHA deficiency. One of the functions of DHA is that it helps to improve blood flow in the brain during mental tasks and this may prove helpful to kids with ADHD.

In a 2018 review published in Clinical Nutrition ESPEN, seven out of nine studies that examined the impact of DHA supplementation in children with ADHD reported an improvement in attention or behavior in the supplemented children. For instance, in one of the studies that examined the impact of daily DHA and EPA supplementation on 40 boys with ADHD, it was observed that the boys who received supplementation alongside their usual ADHD medication exhibited a 15 percent reduction in attention problems compared with the placebo group which showed a 15% increase.

In another study carried out in 362 children, those who received a 600mg daily supplementation of DHA exhibited an 8 percent reduction in impulsive behaviors, compared with the placebo group which had only a 4 percent decrease.


Various research studies have also established a link between higher DHA levels and healthy eyes. Considering that DHA makes up about 60% of the polyunsaturated fatty acids in the retina, it makes sense it influences overall eye function.

In a study that examined the relationship among the DHA content of breast milk, the infant’s red blood cell DHA and visual acuity, the researchers reported that infants with the highest blood DHA were those whose consumed breastmilk with the highest DHA content. They also exhibited the highest clarity of vision.

Overall, DHA is critical in supporting neurological development in children, and has been shown to support proper eye and brain development. In addition to understanding the strategies in optimizing brain health in aging adults, it’s important to remember that taking care of our brains begins as early as pregnancy.