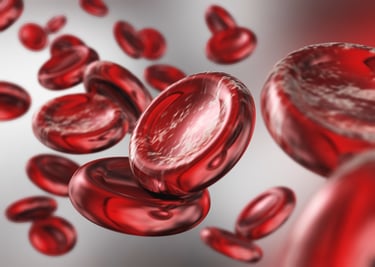 The hemoglobin A1c test is typically used to diagnose diabetes and to monitor blood glucose management over time. The test measures the percentage of glycated hemoglobin proteins in the blood and is generally taken to represent blood glucose levels during the preceding 3-4 months. Increases over time indicate higher average blood glucose levels, while decreases indicate lower levels. While this measurement can show trends over time and is useful for diagnostic purposes when it’s elevated substantially above normal, it has shortcomings that are important to be aware of.

With regard to diagnosing diabetes, a hemoglobin A1c (HbA1c) < 5.7% is considered non-diabetic, while 5.7-6.4% is considered pre-diabetic, and ≥ 6.5% is considered diabetic, although the American Diabetes Association recommends that measurements be repeated a second time to confirm the diagnosis. Additionally, HbA1c < 6.5% doesn’t exclude diabetes that could be identified using fasting blood glucose levels or the response to an oral glucose tolerance test (OGTT).

One of the shortcomings here is that these values are based on the assumption that red blood cells (RBCs) have an average lifespan of approximately 120 days. (It is worth noting, however, that HbA1c is a weighted average. Blood glucose levels during the preceding 30 days have a bigger impact on the measurement than do levels from 90 to 120 days earlier.) There are several variants of hemoglobin that affect red blood cell lifespan as well as tendency to become glycated, which may make HbA1c results less reliable than is commonly believed. The most well-known of these is hemoglobin S, associated with sickle cell anemia, but there are numerous others more commonly found in people of certain geographic heritage. There are several different assays used to measure HbA1c. Most are not affected by hemoglobin variants but some are.

Additionally, glycemic control itself has a substantial effect on RBC survival time: the higher the blood sugar, the shorter the lifespan. A study that looked at the relationship between RBC survival time and HbA1c determined that in men with type 2 diabetes (T2D), an increase in HbA1c of 1.0% was associated with a 7-day decrease in RBC lifespan. In subjects whose HbA1c was > 12%, mean RBC lifespan was 81 days—nearly 35% less than the mean of 123 days assumed in the study. The researchers noted that hyperglycemia leads to reduced RBC survival time, resulting in “a progressively greater underestimation of the severity of the hyperglycemia the higher the GHb [glycated hemoglobin] percentage.” Granted, if blood glucose is regularly high enough to substantially shorten RBC survival time, then small discrepancies in HbA1c may not matter much—for example, if the difference is between 10% and 12%, the hyperglycemia is obviously severe, regardless of which number is truly accurate.

The opposite phenomenon may occur in healthy people with exceptionally good glycemic control. RBC lifespan might be longer than 120 days, potentially allowing for increased glycation simply as a function of time, rather than being a true reflection of blood sugar levels throughout most days. Functional medicine practitioner Chris Kresser stated it well: “In a person with normal blood sugar, hemoglobin will be around for a lot longer, which means it will accumulate more sugar. This will drive up the A1c test result – but it doesn’t mean that person had too much sugar in their blood. It just means their hemoglobin lived longer and thus accumulated more sugar. The result is that people with normal blood sugar often test with unexpectedly high A1c levels.”

For patients in this situation—where HbA1c seems higher than would be expected based on other biomarkers and the full picture of their health, it may be prudent for them to do a 2-week trial with a continuous glucose monitor (CGM). This new technology, which measures interstitial fluid glucose levels at regular intervals 24/7, can help identify individuals whose HbA1c is not reflective of their actual blood glucose levels throughout most days, nor of the degree of variability. (This article by a physician who uses CGMs regularly with patients offers many insights into the benefits of CGMs even for individuals who don’t have diabetes.) It’s not uncommon for highly engaged patients to discover that data from CGMs or even from regular fingerstick glucometers are discordant with their HbA1c. The “real-time” nature of CGM and glucometer measurements may mean these data more accurate represent the true glucose levels, and CGMs can also capture the degree of volatility.

Another factor that affects RBC lifespan (and therefore, HbA1c) is anemia. An anemia that decreases RBC survival time may result in an HbA1c that is lower than would truly reflect the average glucose level. On the other hand, iron deficiency anemia (IDA) may cause HbA1c to be higher than is representative of typical glucose levels. A study that compared HbA1c in iron-deficient subjects with well-controlled T2D found that, compared to iron-sufficient T2D patients, HbA1c was higher in those with IDA. In subjects under age 50, mean HbA1c was 6.71 (± 1.64) in those with IDA compared to 5.53 (± 0.59) in iron-sufficient subjects.

A separate study showed that iron supplementation (100 mg/day for 3 months) resulted in significantly lower HbA1c among non-diabetic subjects with IDA. (Baseline mean HbA1c was 7.4 [± 0.8]. This decreased to 6.2% [± 0.6] after supplementation.) Considering the prevalence of IDA, particularly among certain ethnicities and age groups, this is not something to dismiss lightly. As the study authors cautioned, “Iron deficiency must be corrected before any diagnostic or therapeutic decision is made based on HbA1c.”

Perhaps the biggest shortcoming of HbA1c is that it is reflective only of blood glucose levels. It gives no indication of insulin sensitivity—that is, if HbA1c falls within the “normal” range, how much insulin does an individual’s body require to keep it there? The same is true of fasting glucose measurements as well as glucose measurements during an OGTT. Type 2 diabetes is diagnosed solely through measurements of blood glucose, but glucose may be a lagging indicator of metabolic health. For many patients, glucose levels—whether assessed via fasting glucose, HbA1c, or OGTT—are normal because pathologically elevated insulin is keeping glucose within the normal range. Hyperinsulinemia may precede the deterioration of glycemic control by several years. An HbA1c within the normal range may preclude a diagnosis of T2D or prediabetes, but it provides no certainty that an individual is metabolically healthy. For clinical and diagnostic purposes, it may be helpful to measure HOMA-IR, which is formulated using fasting glucose and fasting insulin.

The bottom line here is that HbA1c clearly has clinical utility but it’s not quite as ironclad a measurement as is typically assumed. When assessing a patient’s glycemic control, it may be best to use HbA1c in conjunction with other measurements, possibly including taking advantage of some of the new technologies available, such as continuous glucose monitors, which provide unprecedented insights into the stability and volatility of an individual’s blood glucose throughout the course of a day.