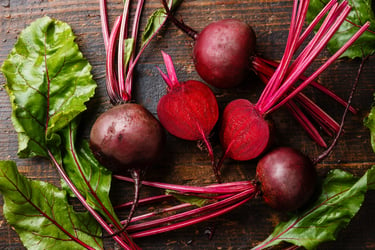 In 2018 a systematic review and meta-analysis of 23 eligible studies was published, examining the relationship between dietary inorganic nitrates and cardiovascular function, which reviewed studies whose primary outcome was blood pressure, along with secondary outcomes including endothelial function, arterial stiffness, platelet aggregation, and/or blood lipids. Nineteen of these studies used beetroot juice as the intervention. This systematic review found an inverse relationship between blood pressure and dietary nitrate intake, with meaningful implications (-4.80 mmHg (P < 0.0001) and -1.74 mmHg (P <0.001)). Accepted models suggest that this degree of improvement would be expected to result in a nearly 20% drop in total hypertension prevalence, as well as 14% and 9% fewer deaths from stroke and heart disease, respectively. This meta-analysis also found significant improvements in endothelial function, platelet aggregation, and arterial stiffness, indicating broad cardiovascular benefits are likely.

A likely mechanism for these cardiovascular benefits is via enhanced nitric oxide (NO) production through a process known as the salivary NO3-NO2-NO reduction pathway. Until relatively recently, all NO production was thought to be a result of the classical oxidation of L-arginine to NO and L-citrulline by several isoforms of nitric oxide synthase. An alternate pathway for NO production has now been well-described; dietary nitrate (from beets and other vegetables) is completely absorbed in the small intestine and enters the circulation. While 75% of this nitrate is eliminated by the kidneys, the remaining 25% re-enters the mouth through the salivary glands, where it is reduced to nitrate by the oral microflora, swallowed, and either metabolized to NO by the stomach’s acidity, or reabsorbed in the small intestine and later converted to NO by a variety of enzymes, including hemeproteins and mitochondrial enzymes.

This alternate pathway seems to have several important clinical implications. For one, anything that disrupts this pathway and limits NO production might be expected to have a negative cardiovascular or metabolic impact. For example, proton pump inhibitors (PPIs) appear to interfere with NO production through several mechanisms, including inhibition of the conversion of NO2 to NO by gastric acid, which unfortunately blocks the anti-hypertensive effect of oral nitrate/nitrite in healthy volunteers, potentially contributing to the greater risk for myocardial infarction associated with PPI use.

Similarly, multiple studies have pointed to the use of mouthwash as contributing to both cardiovascular and metabolic disease. For example, in 2017 it was reported that among individuals at higher risk for diabetes, the use of a mouthwash (of an unspecified type) twice or more per day was reported to increase the risk for diabetes and prediabetes by 50%, even after multivariate adjustment. While several limitations of this study have been pointed out, including the lack of analysis of the oral microbiome and the type of mouthwash used, inhibition of NO production remains a potential mechanism for harm. Mouthwash use, chlorhexidine specifically, has also been associated with a small but significant increase in mortality among ICU patients, and it is speculated that inhibition of NO production may be the pathogenic mechanism.

A study recently published in Redox Biology adds to this growing body of evidence. A network-driven systems-biology approach was used to determine biologically relevant features of the oral microbiome among a small number of older participants (age 70-80). Over a 10-day period of receiving either nitrate-rich beet juice or placebo (nitrate-depleted beet juice), these researchers were able to determine NO3’s effects on bacterial clusters (modules), and how those effects tracked with markers of both cardiovascular and cognitive function. They concluded that nitrate-rich beet juice not only improved markers of physical and cognitive function (such as blood pressure, exercise efficiency, sustained attention, etc.), but it increased the prevalence of some bacterial clusters while decreasing others. For example, a cluster which included C. difficile (associated with increased inflammation) declined with nitrate supplementation, while two clusters (Neisseria-Haemophilus and Streptococcus-Rothiamore) more common among non-smokers, vegans, and individuals with better periodontal health, thrived with supplementation. While a small study, this suggests that modification of the oral microbiome, as part of beet juice supplementation, has the potential to increase nitric oxide production, and improve both cardiovascular and cognitive function.

It is worth noting that vegetables provide more than 80% of dietary nitrates, and two cardioprotective diets, the Mediterranean and the DASH diet, provide 174 –1222 mg of nitrate per day, as compared to a typical Western diet which provides approximately 75 mg. It is also worth noting that in addition to the improved blood pressure associated with beetroot juice supplementation, beetroot juice has also been shown to modulate cerebral blood flow, which may partly explain its cognitive benefits. Given that beets are also rich in phenolics and betalains (antioxidants and anti-inflammatories which provide beets’ distinctive pigment), they appear to have multi-fold health promoting properties, suggesting more widespread usage (certainly for cardiovascular and cognitive function) should be considered.