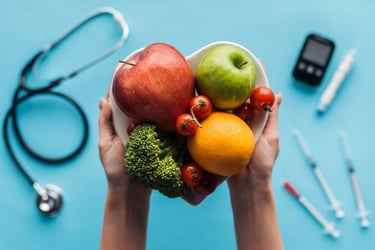 According to the World Health Organization (WHO) there are 422 million people with diabetes mellitus (DM) and 318 million with impaired glucose tolerance (dysglycemia). This is an important public health issue that requires attention given its relationship to a plethora of chronic diseases as well as economic burden. We know that overweight (BMI > 25) and obesity (BMI>30) also lead to increased health risk relative to increasing values. However, we must look beyond these numbers alone and consider numerous factors that contribute to metabolic imbalances.

Insulin resistance (IR) is a condition that occurs when excess glucose in the blood reduces the cell’s ability to utilize blood sugar for energy. Blood sugar regulation is a critical factor because when cells lose their ability to respond normally to insulin, the result is a build-up of glucose in the blood. The body attempts to cope with this situation by producing more insulin. Over time, the pancreas loses its ability to produce insulin. IR has the potential to result in type 2 diabetes, prediabetes, or gestational diabetes. “Metabolic syndrome” describes a group of pathophysiological changes based on insulin resistance that may lead to damage of the heart, blood vessels, kidneys, and nerves.  While poor diet may be a contributing factor, a comprehensive approach to IR with dietary and lifestyle changes is often warranted given the impact of other factors such as toxins, sedentary lifestyle, chronic inflammation, and chronic stress that lead to unhealthy blood sugar metabolism.

There are numerous symptoms that may be related to impaired blood sugar control; however, people with IR may initially have no complaints. High blood sugar levels may include symptoms such as fatigue, hunger, brain fog, increased weight gain, high blood pressure and high cholesterol.

Common approaches to promote healthy blood sugar metabolism include dietary guidelines, weight loss, and regular exercise. Often times an unhealthy diet is deficient in the nutrients necessary to support healthy cell membranes, insulin receptors, and a strong insulin signal. In addition, poor diets associated with high glucose levels have been shown to affect gene expression, which is important for heathy blood sugar metabolism. Some basic dietary changes include limiting the following: sugar and grains, inflammatory fatty acids, and conventional grain fed meat. These should be replaced with healthy fats such as olives/olive oil, avocado, and grass-fed meats and wild fish. Controlling the glycemic load of a meal is important and can be accomplished by combining protein, fats, and whole food carbohydrates at every meal/snack while avoiding quickly absorbed carbohydrates that raise sugar and insulin levels. Nutritional supplementation that supports blood sugar metabolism may also be appropriate.

A combination of nutrients that support blood sugar metabolism may include a quality multivitamin and mineral in addition to some or all of the following:

Lipoic Acid: Studies have shown that lipoic acid improves insulin sensitivity and promotes healthy blood sugar levels. In addition, lipoic acid acts as an antioxidant and boosts the antioxidant defense system through Nrf-2-mediated gene expression and by modulation of peroxisome proliferator activated receptors-regulated genes. ALA inhibits nuclear factor kappa B and activates AMPK in skeletal muscles, which in turn have a plethora of metabolic consequences.”

Taurine: A deficiency of taurine in can cause metabolic impairment and dysfunction in various tissues leading to health problems.