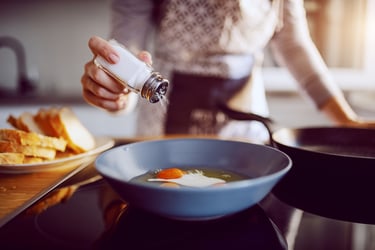 The association between sodium intake and several adverse outcomes, including hypertension and both cardiovascular and all-cause mortality, continues to be a difficult one to untangle. For example, a number of large studies have found sodium intake to be directly associated with total mortality, even at the lowest levels of consumption, with NHANES data suggesting that it is the ratio of sodium to potassium that may have the most predictive value, though sodium itself was still found to be associated with increased total mortality. In contrast, a recent study published in the European Heart Journal provides the opposite conclusion; sodium consumption was not only inversely associated with overall mortality, but it was also positively associated with life expectancy. Using data from 181 countries, these associations persisted even after they were restricted to countries with the highest income. The uncertainty continues.

Another recent study, also published in the European Heart Journal, details a different approach to this issue. The authors of this study assert that previous inconsistent findings may be because of inaccurate methodologies or study designs. One possible type of confounder is a prospective cohort study that does not control for reverse causation. For example, some studies have found a J or U-shaped association between sodium intake and cardiovascular disease, suggesting that low intakes are also problematic. But if these studies haven’t controlled for high-risk groups disproportionally having a low sodium intake (perhaps because they were advised to do so), such as people with diabetes, hypertension, preexisting cardiovascular disease, etc., this association can be distorted. Additionally, multiple consecutive 24-hr urine samples are considered to be the gold standard for estimating sodium consumption, yet other less accurate methodologies (food frequency questionnaires, spot urine tests, etc.) are often employed because of cost and convenience. Multiple other types of design and methodological flaws have been reviewed previously, all of which may cloud any potential associations.

In the recently published study, though, rather than providing dietary surveys or semi-accurate methods of sodium excretion, long-term salt usage behavior was assessed in over 500,000 participants in the UK Biobank cohort, with over 9-years of follow-up. In addition to dietary recalls and spot urine samples, participants were asked about their preferences for adding salt to meals. Although adding salt to meals is thought to comprise only 6-20% of total salt intake, table salt is unlikely to include potassium, and the authors speculated that it would more accurately represent sodium (without concomitant potassium) intake over time.

This study found that a greater frequency of adding salt to foods was significantly associated with greater spot and 24-hour urine sodium excretion, and inversely associated with spot potassium excretion. After multiple types of adjustments were made to control for potentially confounding factors, including diabetes, cancer, cardiovascular disease, BMI, diet, lifestyle, socioeconomics, etc., there was a uniformly increased risk for premature death with greater sodium consumption (as measured by the addition of salt to foods). For example, in the highest frequency group (people who “always” add salt to their foods), there was a 28% higher multivariable hazard for all-cause premature mortality. The increased risk with greater frequency of adding salt to foods was mitigated by fruit and vegetable intake; however, in the group consuming high amounts of fruits/veggies, there was no significant association between mortality and salt frequency, while at low fruit/veggie intake, the hazard for premature mortality was 68% higher among high salt users. This seemed to hold for urinary potassium levels as well, strongly suggesting that the potassium intake is largely responsible for negating the harm of a high sodium intake. Compared to people with a low frequency of adding salt, 50-year-old women and men with high frequencies had 1.5 and 2.28 less years of life expectancy, respectively.

While there are still questions to be answered and apparent contradictions in the existing research, there is also evidence to suggest that excess sodium consumption, particularly without a simultaneous increase in potassium consumption, is linked to a greater risk for not only cardiovascular disease, but also for osteoporosis, renal disease, and even obesity. Although there have been genetic factors as well as epigenetic factors identified which may predispose to hypertension, there are other variables that may determine the harm of sodium ingestion. For example, a synergism between fructose and sodium in the development of hypertension has been identified; fructose increases diacylglycerol and uric acid levels, as well as angiotensin II sensitivity and levels, and also increases the absorption of sodium in both the diet and the kidneys, suggesting that high intakes of these two components (aka the Western diet) may be much more consequential than either alone. Also, age has been associated with a decline in renal function which may exacerbate the effects of a higher sodium diet.

A very recent observation is that high sodium diets may have consequences on the gut microbiome, which in part mediate their adverse effects. For example, animal studies and small-scale human ones suggest sodium may inhibit more favorable bacterial species and promote activation of specific immune cell types associated with salt-sensitive hypertension. Hopefully, a better ability to predict who is at greater risk from a high salt diet will emerge with future research, but current evidence suggests high sodium intake, particularly when unchecked by potassium, may still be a significant concern for much of the population.