Recently published in Current Developments in Nutrition, a double-blinded randomized cross-over trial compared the effects of a catechin-rich green te... 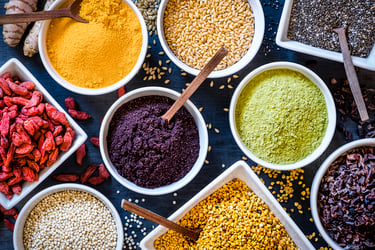 Nature is filled with herbs that have a wide range of healing properties, many of which are perfect for detoxification. You've probably heard of a lot of great detox herbs like parsley, dandelion or Hibiscus. This article won't be covering these commonly known detoxification herbs, but instead will dive deep into ancient herbs that are being investigated by science for their powerful healing and detoxification properties.

Picrorhiza kurroa is a popular perennial herb exported from the Nepalese Himalayas. It’s used as a substitute for Indian gentian (Andrographis paniculata), which is a flowering plant that produces seeds that are both detoxifying and protective against infectious diseases.

Picrorhiza kurroa is rich in phytochemicals, antioxidants, is anti-inflammatory and contains “picrosides”, a compound that regulates detoxifying enzymes. Many of the healing properties of Kurroa are due to the presence of 22 active iridoid glycosides. Picrorhiza kurroa is particularly well known for its role in detoxifying and protecting the liver and respiratory system.

Andrographis paniculata, more commonly known as, “Green Chiretta” is a medicinal herb native to Southern and Southeastern Asia. Filled with rare healing photochemical compounds such as curvifloruside and noriridoids, Andrographis Paniculata/ Green Chiretta is a heal-all herb, and as such, it is perfect for a detox program.

All parts of the Green Chiretta plant are used for healing, from the roots to the leaves and stems. In Chinese medicine, Green Chiretta is used as a cold property plant, to cool the body when the internal temperature is high.

Eclipta alba is commonly known as False Daisy, and also goes by the names Eclipta prostrata, Yerba de Tago, Karisalankanni, and Bhringraj. Interestingly, in its native land of Bangladesh, False Daisy is considered a weed by farmers.

Berberis aristata DC (Berberidaceae), commonly known as  "Dāruhaldi" or “Citra,” is a traditional medicinal herb found in the Northern Himalaya region. Berberis aristata is used in Indian medicine and also Ayurveda as a promoter of healthy microbial balance. The root, stem, and leaf have been extensively studied for their pharmacological properties.

Milk Thistle is an herb that you’ve probably heard of with a multitude of names, such ascardus marianus, milk thistle, blessed milk thistle, Marian thistle, Mary thistle, Saint Mary's thistle, Mediterranean milk thistle, variegated thistle or Scotch thistle.  Silymarin is the active compound that is extracted from the Milk Thistle plant, making it an effective herb in the detoxification of the liver. In a wide range of studies, Milk Thistle has been found to be a potent antioxidant; it enhances protein synthesis and supports healthy inflammatory pathways.

Boerhavia diffusa is commonly known as Punarnava, but also goes by the names Red Spiderling, Spreading Hogweed, and Tarvine. Although Punarnava has many health-supporting properties, it's used widely in culinary dishes in India.

Indian Barberry is also known as Berberis aristata, Chutro or Tree Turmeric. Berberis aristata has been used for over 2500 years and is native to the Himalayan region. The root bark has been scientifically proven to promote healthy microbial balance and exhibit antagonistic activity towards 13 pathogens.

Other parts of the plant (root, stem, bark, and fruit) and different species of the Berberidaceae family have been used in healthy detoxification programs due to the abundance of the phytoconstituent, Diterpenes.