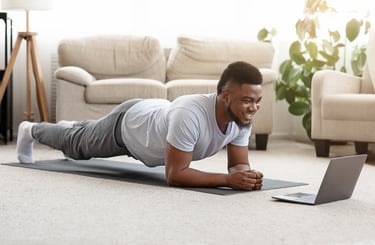 Poor lifestyle choices, including inactivity, reduces the quality of life for millions of Americans. A massive $117 billion is spent annually on healthcare and about 10% of premature deaths are associated with inadequate physical activity.

Movement really is medicine, simple daily movement helps maintain and improve health. Interestingly, a person who exercises for 30 minutes a day, but sits the rest of the day may actually expend less energy than someone who does not exercise but is constantly “pottering” around.

Movement, in and of itself, activates all of the systems in the body. Speeding up the breakdown, and elimination of waste, while enhancing detoxification pathways. In this article, we’ll explore a wide range of evidence-based health benefits of exercise, from reversing chronic health conditions to boosting longevity.

Sedentary Behavior | The Epidemic of Inactivity

Studies have shown that television watching and other sedentary behaviors increase the risk of developing obesity and type 2 diabetes mellitus in women. Additionally people are twice as likely to develop metabolic syndrome if they don’t engage in any moderate or vigorous activity during their leisure time.

According to the U.S. Department of Health and Human Services (HHS): “Being physically active is one of the most important actions that people of all ages can take to improve their health.”

Due to the link between sedentary lifestyles and developing chronic illnesses like type two diabetes, obesity, or metabolic syndrome - sedentary behaviors should be significantly reduced.

Lessen the amount of time watching TV, videos or using computers, and replace with activities like:

1. A Significantly Proven Way to Defy the Aging Process

There are innumerable approaches to exercise, but what approach helps boost longevity? There have been several papers written that explain how to best use exercise for longevity, showing that:

2. Movement Makes the Heart Happy | Most of the time...

Obesity and poor heart health is often linked to a lack of physical activity. However, too much exercise has been shown to be stressful to the heart - consistent moderate exercise is key.

Movement activates the junk removal systems of the body.

Unlike the blood, lymph fluid has no central pump. This means that we rely on the motion from our muscles for the lymph fluid to move. Interrupted lymphatic flow (due to lack of activity) can lead to a build-up of toxins in the human body. Moving the lymphatic fluids through exercise or lymphatic massage can improve the circulation of lymph fluid, leading to optimal excretion of waste material.

They’re connected to the great lymphatic system by lymphatic vessels. The lymph nodes are filled with B and T lymphocytes that work to defend the body by breaking down foreign particles and fighting infection.

The term “fascia” or “interstitium,” refers to an interconnected matrix inside the body, made up of collagen and elastin fibers - suspended in mucous gel. The fascia is intricately linked to the immune system via the lymphatic system.

Tenascin and osteopontin are molecules that work in the extracellular matrix (ECM) inside the fascia to enhance the immune response. These molecules are upregulated with exercise. Exercise stimulates the fascial system to promote balance, boost immunity and stimulate collagen remodeling. The fascia also plays an important role in reducing inflammation.

Adult Hippocampal Neurogenesis (AHN) is a cognitive developmental process. Whereby new neurons are generated from neural stem cells in the hippocampus. Elevated AHN has been found to enhance memory and learning.

In one study published in the Journal of Physiology on 04 Feb 2016 rats were subject to 6-8 weeks of a low response trainer (LRT) and a high response trainer (HRT) - on a treadmill. When compared with sedentary rats, AHN was elevated in both LRT and HRT models. Researchers concluded that AHN was most effective if the exercise is aerobic and sustained.

8. Increase in the Bacterial Metabolite - Butyrate

Butyrate is a health-promoting gut microbe. A prebiotic short-chain fatty acid produced from the bacterial fermentation of dietary fiber. The primary fuel for colonocytes (epithelial cells of the colon). Butyrate has been shown to increase colonic epithelial cell proliferation, promote gut barrier integrity, and regulate the host immune system and gene expression. Butyrate production is upregulated in people who exercise regularly.

According to a Microbiota Diversity Study published in Gut. BMJ Journals, 9 June 2014 - exercise boosts diversity in the microbiome. A study of Professional Irish Rugby players established that their gut microbiota had greater alpha diversity and a higher relative abundance of 40 different bacterial taxa than the gut microbiota of lean sedentary controls.

There’s no one-size-fits-all exercise plan. However, it’s important to keep it interesting - adults need a mix of physical activities to stay healthy. Everyone is unique and will respond differently to strength training or aerobic activity.

4 Ways to Reprogram the Brain with Exercise

Scientists the world over are now in agreement with the fact that the adult brain isn’t fixed. The brain can regenerate and be reprogrammed in the correct environment. One way to produce this environment is by exercising. Studies show that:

According to the Consensus Guidelines for Physical Activity and Public Health from the American Heart Association and American College of Sports Medicine, the current recommendation is to get at least 150 minutes of moderate-intensity exercise a week.

Or 75 minutes of vigorous-intensity exercise (about 20 mins per day).

Despite the Current Guidelines 4 in 10 U.S. adults say that they NEVER engage in any exercise, 25-35% of American adults are inactive and just 24.0% of adults met physical activity guidelines in 2018.

George A. Sheenan, American Athlete & Physician summed up exercise nicely when he said, “Exercise is done against one’s wishes and maintained only because the alternative is worse.” For this reason accountability and encouragement will help promote healthy exercise habits. Once a routine is established, exercise can become an invigorating part of a holistic healthy lifestyle.