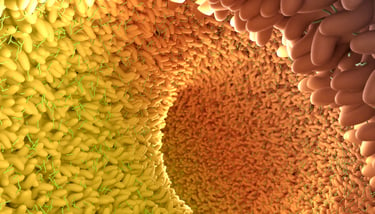 In an extraordinary analysis published recently in Nature Communications, researchers in Sweden report the results of a cross-sectional study which, to date, is the largest and most detailed association study between gut microbiota and plasma metabolites. This study had over 8500 participants between the ages of 50 and 64, identified over 1500 microbial species with deep metagenomic sequencing (whole-genome shotgun-sequencing), and profiled over 1300 plasma metabolites, characterizing the relationships between these metabolites and both specific microbial species as well as alpha diversity, a broader measure of the species diversity.

In sum, as high as 58% of the variance in individual plasma metabolites was attributed to the gut microbiota, 997 associations were found between alpha diversity and plasma metabolites, and nearly 550,000 associations documented between specific microbial species and plasma metabolites. It’s worth noting that this was an un-targeted study, i.e., the researchers did not have specific metabolites or microbiota they were attempting to detect, but rather they described what they found with no specific goal in mind. The potential this type of study has to both understand basic biology and the specific ways in which the gut microbiota influence health and disease is hard to overestimate. The authors have also created an online atlas of their findings open to all, enabling anyone to take a deep dive into their findings.

A few examples of the associations they discovered; several metabolites had the strongest positive associations with alpha diversity, a measure of the richness and evenness of the microbiome, typically more favorably associated with positive health metrics. Two of these three metabolites, 3-phenylpropionate (hydrocinnamate and cinnamoylglycine), have previously been linked to both alpha diversity as well as a significantly lower incidence of type 2 diabetes in large cohort studies, consistent with the findings in this study. It is not clear yet what physiological effects these metabolites even have; it has previously been suggested that cinnamoylglycine may be a marker of colonization resistance against Clostridium difficile, for example, as a more diverse microbial community is more pathogen resistant, but these causal relationships are not well established.

Some metabolites were more strongly predicted by the microbiota than others; 554 of the metabolites had >15% of their variance explained by the microbiota, and 61 metabolites had over 30% of their variance explained. For example, p-cresol sulfate is classified as a uremic toxin, and 46% of its variance was explained, among the highest. Previous research suggests this toxin is more readily produced by the microbiota of people with end-stage renal disease, and is a possible target for therapy, as the dysbiosis-induced production of p-cresol sulfate aggravates the disease. Indeed, this study found that 10 uremic toxins (and proposed toxins) were more elevated in people with a lower eGFR. Members of the Eubacteriales order (formerly called Clostridiales) appeared to be the most prolific for generating this toxin, while Faecalibacterium prausnitzii was strongly and inversely associated with p-cresol sulfate levels. F. prausnitzii, a butyrate-producing species, was also one of the most depleted organisms in patients with renal disease, including more severe disease, at least suggesting a possible biomarker or intervention for clinical trials. Previous research also suggests that F. prausnitzii not only provides short-chain fatty acids (SCFAs) to the intestinal epithelium, it also reduces oxidative stress, and has been positively correlated with albumin-adjusted thiols, reflecting an association with a more favorable redox status.

Strong associations were also observed between the presence of the proton pump inhibitor (PPI) omeprazole (not necessarily the same as having had a prescription for omeprazole) and the Veillonella and Streptococcus genera. Though these are considered normal oral flora, the researchers also had evidence for the subsequent enhanced activity of pathways related to the degradation of fructose, ribose, lactate and trehalose, suggesting enhanced carbohydrate fermentation would be expected with omeprazole use. This is consistent with previous studies which also found PPIs enrich the presence of oral flora in the gut, and upregulate pathways that would increase fatty acid and lipid biosynthesis, as well as L-arginine biosynthesis. Interestingly, L-arginine increases both the solubility and stability of omeprazole.

Metformin use has previously been linked to substantial changes in the gut microbiota, and some of these changes are thought to be partly responsible for its anti-diabetic effects. This study supported previous findings, with the abundance of 462 bacterial species influenced by the presence of metformin in the plasma, with the strongest associations for an increased abundance of Escherichia marmotae and E. coli, and decreased abundance of Romboutsia timonensis, Intestinibacter sp. MGS:0194 and Intestinibacter bartlettii. A previous 3-parallel arm trial of metformin had similar findings, with species abundance changes associated with SCFA levels, such as an increase in acetate, itself correlated with lower fasting insulin. This study also found a strong upregulation for pathways involved in amino acid metabolism, specifically the degradation of isoleucine and alanine, as well as alterations in the degradation of fructose and trehalose. This study certainly generates a great deal of excitement to better understand the connections between the gut microbiome and systemic health, and it opens the door for better diagnostic and therapeutic interventions.