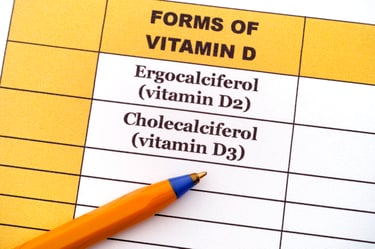 When comparing ergocalciferol (D2) to cholecalciferol (D3), most studies typically report on differences related to serum levels of 25(OH) vitamin D, with a focus on which form is more efficient or has a more enduring effect. Results from a recently published clinical trial sharpen our understanding of the divergent effects of these two forms of vitamin D while also raising important questions. An analysis of transcriptome modulation in response to supplementation was published in Frontiers in Immunology, providing data on gene expression and adding greater insight into vitamin D’s biological effects. As a longitudinal study, it highlighted differences both within treatment groups as well as within individuals.

This was a 12-week randomized trial with 3 groups: placebo, or either 600 IU vitamin D2 or D3 (as fortified foods) were given to women of south Asian and white European descent. Data from 97 women were available for transcriptome analysis, measured at the beginning of the study and again at 12 weeks to allow for intraindividual comparison. This was an important component of the study design, as many of the statistically significant changes were observed within individual participants (versus between groups), likely reflecting heterogeneity in inter-individual responses.

On the whole, both forms of vitamin D tended to down-regulate the expression of many (774) genes, most of which are in involved immune pathways. This builds support for the understanding that one of the roles of vitamin D is to provide restraint or balance to an over-active immune system. However, only 13% of the down-regulated genes were in common between D2 and D3, while 28% were uniquely downregulated by D2 and 59% only by D3. There were also several indications of important differences between these two forms, likely to have relevant clinical consequences; for example, while D3 up-regulated genes involved in interferon alpha (type 1) and gamma (type 2) responses (critical to innate immunity against both bacterial and viral infections), D2 down-regulated these same genes. The authors speculate that a higher basal activity of type 1 interferon-stimulated genes (as observed with D3) would promote a more vigorous response to viral infections.

Additionally, serum levels of 25(OH)D3 decreased in the group receiving vitamin D2 to a greater extent than the group receiving placebo, suggesting that D2 supplementation may actually deplete levels of this D3 metabolite. This also raises the possibility that changes in gene expression in this group may be due to D2 supplementation and/or the drop in 25(OH)D3 levels. Lastly, differences between ethnicities were also observed, indicating that this type of transcriptomic analysis should be conducted among more diverse populations.

This study opens the door for a more in-depth understanding of the differences between these two forms of vitamin D, which are clearly not identical or interchangeable. For example, while the active forms of each (1,25(OH)2D3 and 1,25(OH)2D2) bind to the vitamin D receptor, they do not appear to have the same effects on osteoblast activity. Most studies generally report that D3 has a more potent ability to raise 1,25(OH)2D levels, and more effectively during winter months. Data published earlier from this same trial group (the “D2-D3 Study” published data from 335 participants, of which only 97 had transcriptome data available) found that D3 was more efficacious than D2 at increasing total 25(OH)D levels. Indeed, 100% of white European women and 70% South Asian women achieved 25(OH)D status > 50 nmol/L with D3 supplementation, while only 90% and 50% did, respectively, with D2.

A systematic review and meta-analysis published last year, which included 24 studies and nearly 1300 participants, also found a greater increase in 25(OH)D levels (as well as a reduction in PTH) with D3 vs. D2, across a broad range of participant demographics. A second systematic review also published last year found that among black and Asian populations, D3 was significantly more effective than D2, and that supplemental vitamin D was considerably more potent than food fortification. Extremely high dose administration of vitamin D has also shown that D3 increases total and free 25(OH)D levels to a greater extent than D2.

Additionally, a 2019 systematic review published in BMJ found a statistically significant reduction in cancer mortality in participants supplementing with vitamin D, but subgroup analysis found this to occur only with D3, not D2. Furthermore, a cross-sectional analysis of NHANES 2011-2014 data found that 25(OH)D3 had a linear and inverse association with depression among women in the US. The association between depression and 25(OH)D2, however, was represented by an inverted U-shaped curve with an infection point at 56.2 nmol/L.

Thus, although most studies find either an equivalent effect or a superior effect of vitamin D3 compared to D2, this most recent study is of considerable importance, because it challenges the notion that measuring 25(OH)D levels alone can adequately determine any relevant differences between these two forms. While it seems very likely that D3 does more effectively raise 25(OH)D levels in most populations, and it is of some concern that D2 reduced 25(OH)D3 levels in this most recent study, the differing biological effects (and varying effects across ethnicities) indicates we have much more to learn. The possibility that D3 may more effectively promote both tolerance as well as viral/bacterial resistance is an intriguing one which deserves closer evaluation.