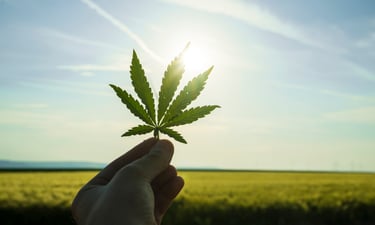 Hemp and marijuana are both from the same Cannabis sativa plant, but hemp is marijuana’s non-psychoactive cousin mostly used for the extraction of cannabinoids. As legislation around hemp and marijuana change in the US, it’s important to understand the history and to know the difference between the plants.

In this article we’ll explore the history of hemp in the US, legislation surrounding hemp and marijuana, abuse potential, and the difference between cannabinoids such as CBD versus THC.

The History of Hemp

Hemp was originally grown in China and was introduced to the US in the 17th century. In the 17th and 18th century, it was legal to grow hemp in the US. In fact, if you refused to grow hemp you could get incarcerated. Back then hemp was used to produce fabric, sails and ropes, and as such was essential. Hemp was used as the main ingredient in the production of textiles, fabric, bed sheets and curtains.

The first Ford car was made out of hemp plastic and used hemp gasoline (hemp fuel actually produces 47% fewer emissions when compared to diesel). Another random fact: both the Gutenberg Bible and the King James Bible were first printed on hemp paper.

There is no end to the uses for hemp. The word “canvas” comes from the latin word cannapaceus, which translates as “made from hemp”.  Artists didn’t just paint on hemp canvas, they also painted with hemp seed oil based paints.

In the 1820s cotton was introduced to the US, reducing the requirement for hemp. Hemp was subsequently banned in the US in the 1930s, when the 1937 Marijuana Tax Act came into effect making it almost impossible to buy or sell marijuana in the US. Prior to the 20th century, there were no illegal drugs in the USA - all illicit substances such as cocaine and heroin were freely available.

The 1970 Controlled Substances Act classified cannabis (including hemp) as a schedule 1 drug.

Why Is Marijuana Illegal in Some States?

People’s attitude toward hemp or marijuana began to change in the early 1900s when the Poison Act in California classified cannabis as a poison. Marijuana was subsequently prohibited in 16 states. We are currently seeing the same pattern in reverse, as states begin to legalize marijuana, with California being the first state to legalize medical marijuana in 1996.

Following conflicts that resulted from an influx of Mexican immigrants (associated with the use of marijuana) back in 1910, a media campaign was launched to convince the public that marijuana would make you crazy. The pinnacle of this campaign was a film called Reefer Madness that was released in 1936. The film told the story of youths that became violent and criminal because of marijuana. Many more films were later released to cement the idea that marijuana was bad and should be made illegal.

What’s the Difference Between Hemp and Marijuana?

Marijuana is rich in tetrahydrocannabinol (THC), with 12- 30% of its cannabinoids being THC. On the other hand, hemp has fewer THC cannabinoids, with the maximum being 0.3%. THC is responsible for the “high” that people feel with marijuana. THC levels found in marijuana do have some short-lived side effects such as dry mouth, bloodshot eyes, memory loss and slower reaction times, whereas other cannabinoids within hemp do not.

Hemp is high in cannabinoids such as CBN, CBG, CBD, terpenes, etc…, but low in the cannabinoid, THC. Hemp also is used for many industrial purposes. Its seeds are great for making oil, cakes, milk, granola, fuel, paint, body care products and protein powder. While the roots, leaves and flowers are more commonly used for medicinal purposes, the leaves can also be used for animal bedding. The stalk of the hemp plant can be used for making insulation, rope, fiber and fiber boards.

Cannabinoids and THC all interact with the body's endocannabinoid system (ECS), producing very different effects on the body. Interestingly the ECS was identified in the 1990s while researching THC. The ECS plays a role in reproduction, immune system, memory, appetite, mood and sleep. The body makes its own endogenous cannabinoids to keep the body's systems in balance.

The World Health Organization (WHO) published a report in 2017 that confirmed that certain cannabinoids are safe and well-tolerated in humans. In the report they also said, "To date, there is no evidence of recreational use of CBD or any public health related problems associated with the use of pure CBD."

On the other hand the report advised that there can be interactions with other medications. Also the purity of the hemp extracted cannabinoids varies due to the plants used and the method of extraction.

Hemp is a versatile plant that has had a turbulent history in the US. Both hemp and marijuana have always been featured in the media whether for banning or legalizing. Separating hemp from marijuana legally has meant that various hemp-based products can be made in the US, and understanding the difference between hemp and marijuana and the bioactive compounds allows for making more informed choices.

Taking a Closer Look at Hemp

The interest and use of hemp products have grown exponentially over the past several decades as the understanding of the...

END_OF_DOCUMENT_TOKEN_TO_BE_REPLACED

The holiday season has traditionally come with loads of stress, and now we’re adding the complications of a pandemic to ...

END_OF_DOCUMENT_TOKEN_TO_BE_REPLACED

What is all the fuss about cannabinoids? Is it all about cannabis or is there more to the hype? These are common questio...