D and K for Healthy Bones 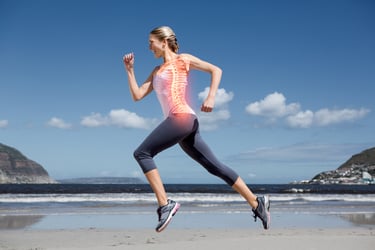 We know a lot about vitamin D and bone health. Vitamin D is considered a “secosteroid hormone” essential for calcium absorption and bone mineralization, and is positively associated with bone mineral density (BMD). Without it, we cannot effectively absorb calcium, which we need to help maintain healthy teeth and bones. Also, in a recent study in Annals of Saudi Medicine, vitamin D levels were shown to directly impact BMD. Data was collected on 400 participants where 25(OH)D levels were taken as well as BMD measurements. What they found came as no surprise; adequate levels of vitamin D had a positive correlation on bone mass among all age groups.

But what do we know about vitamin K? In addition to vitamin D, vitamin K is another bone-building vitamin. Vitamin K is a fat-soluble vitamin first identified in a study on blood coagulation by Carl Peter Henrik in Denmark. The letter “K” stands for “Koagulation’, a Danish term for coagulation. Vitamin K falls into two types: vitamin K1 and vitamin K2. Vitamin K1 is also known as phylloquinone or phytonadione, and vitamin K2, menaquinone. Different types of vitamin K vary in their biological activities. Vitamin K1 is mainly stored in the liver and plays a greater role in production of coagulation proteins, while vitamin K2 is distributed throughout the whole body. Most of our leafy greens are high in vitamin K and include kale, mustard greens, swiss chard, and spinach.

Vitamin’s K’s main function is as a cofactor of the enzyme, enzyme γ-glutamyl carboxylase (GGCX) in the production of vitamin K-dependent proteins. Vitamin K is responsible for activating two vital proteins in the body, osteocalcin and matrix GLA protein. Osteocalcin is a protein necessary to help maintain calcium homeostasis in bone tissue. It also collaborates with osteoblast cells to build healthy bone tissue. Without enough vitamin K, osteocalcin production is limited and reduces calcium flow into the bone tissue. Matrix GLA protein is also found in vitamin K. According to Nature Research journals from Scientific Reports, the role of matrix GLA protein was assessed on mice fed a high fat diet. Vitamin K-dependent proteins' gene expression and impact on bone formation were evaluated. What they found was that gene expression levels of GGCX and vitamin K epoxide reductase (VKOR) were reduced in control-fed animals indicating the link between gene expression levels of GGCX, VKOR, and bone formation. The results verify the significant role vitamin K plays in improving bone health, enhancing bone mineral density and also reducing fractures.

On their own, vitamins D and K both have bone-building benefits, but they work better synergistically to improve bone density. Even small doses of vitamin K benefit bone health, specifically when taken with vitamin D, as it helps to alter bone metabolism. Several mechanisms are suggested by which vitamin K can modulate bone metabolism. Besides the gamma-carboxylation of osteocalcin, there is increasing evidence that vitamin K also positively impacts calcium balance, which is critical for healthy bone metabolism.

With their ability to promote proper bone formation and calcium absorption, vitamins D and K can support overall bone health. Though each play a significant role in calcium levels, these two vitamins are much more potent when working together.

END_OF_DOCUMENT_TOKEN_TO_BE_REPLACED

From time to time, science is turned on its head by irrevocable, ground-breaking discoveries. In 2006, the Nobel Prize w...

END_OF_DOCUMENT_TOKEN_TO_BE_REPLACED

Are You Getting Enough Vitamin D?

During the past few decades we have been taught to be wary of the sun. For some reason, research that found sunburns to ...