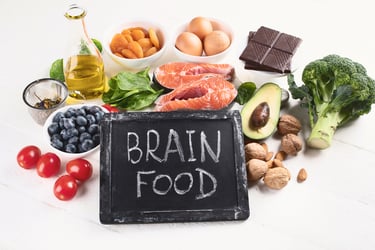 The health benefits of two omega-3 fatty acids, eicosapentaenoic acid (EPA) and docosahexaenoic acid (DHA), seem indisputable and range from improved cardiovascular risk factors and body composition to promotion of healthy inflammatory pathways. Lately, however, DHA has received a brighter spotlight of attention in the news due to its ability to influence the structure, function, and signaling of the brain. This impact results in a positive effect on memory and the nervous system, appealing to an aging population concerned about cognitive decline.

Numerous studies have been conducted with confirmation that those who consume more fish and fish products had better cognitive performance and slower decline in mental function. And research has also indicated that APOE4 is the strongest risk factor for developing Alzheimer’s Disease (AD) due to its role in DHA metabolism and cognitive outcomes. DHA promotes healthy brain function that is lacking in AD. However, there appears to be more to this story than just the popular APOE4 gene, a poor diet or failure to properly supplement with fish oils.

Is it DHA alone that has this potency or are there other factors yet unexplored contributing to the brain-building benefits of DHA?

The answer may lie in the blood brain barrier (BBB) and fatty acid-binding protein 5 (FABP5).

The level of DHA that actually reaches the brain is regulated by the BBB and this barrier is known to be highly restrictive to block the passage of certain substances from the bloodstream. Since brain DHA comes from the plasma, understanding the role of the BBB and mechanism of fatty acid transport to the brain is necessary. By studying transporters, we may better understand how to influence passage through the BBB and provide better individualized dietary and supplement recommendations.

A 2016 mouse study found that DHA levels were influenced specifically by an intracellular carrier protein, fatty acid-binding protein 5 (FABP5), which facilitates the transfer of DHA across the BBB. FABP5 is a protein that in humans is encoded by the FABP5 gene. Fatty acid binding proteins are a family of small, cytoplasmic proteins that bind long-chain fatty acids and may play a role in fatty acid uptake, transport and metabolism. Polymorphisms in the FABP5 gene are associated with type 2 diabetes.

In a nutshell, FABP5 influences the uptake, transport, and metabolism of brain DHA. Not surprising, mice with deficits in this transport protein displayed reduced access to DHA. Therefore, FABP5 in the brain endothelial cell is a key contributor to brain levels of DHA.

In the study, AD mice with lower DHA levels had decreased FABP5 expression; functional testing indicated that mice who were treated with a 6-months of an omega-3 fatty acid-depleted diet had even lower levels of brain DHA compared to the AD mice on a control diet. While the control diet used canola oil, the omega-3 depleted diet replaced canola oil with peanut oil and sunflower oil; this kept the omega-6 levels the same while reducing only the omega-3 levels. In this case, the FABP5 deficiency made them more susceptible to cognitive deficits (short-term spatial memory and impaired memory retention over 24 hours) and dysfunction due to the combined effect of genetics and diet.

FABP5 upregulation in neurodegenerative diseases associated with decreased DHA (such as AD) may provide a new approach to restoring cognitive function. If we can better understand genetic influences on such mechanisms, scientists may be able to better tailor recommendations and develop new ways to improve brain DHA levels for those who are likely to be deficient and unresponsive. Therefore, not only is it imperative to offset the Standard American Diet (SAD), replete with omega-6 fatty acids, with EPA and DHA, we must recognize the pathways by which these EFAs find their way to the brain.

For now, however, making sure we obtain the proper amounts of omega-3s to balance our omega-6 levels is critical (although what are considered “optimal” omega-6:omega-3 ratios may vary). DHA, more specifically, can be found in fatty fish (salmon, herring, anchovies, etc…) as well as algae, flax and fish oil supplements.