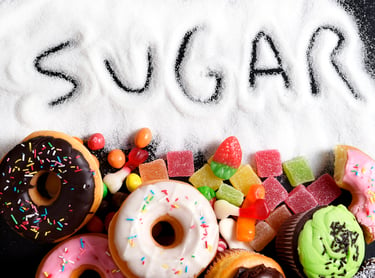 The short answer: it depends.

The immune system is continually responding to endogenous and exogenous stimuli whether from the foods we eat, our sleep and exercise habits, stress, relationships or the air we breathe, the body is always looking for ways to maintain homeostasis. Eighty-three research studies have concluded that a diet rich in fruits and vegetables actually improves immune function. Conversely, a diet rich in processed foods and man-made sugars can suppress the immune system. However, it’s not always that simple.

Is Sugar an Immunosuppressant?

Sugar may or may not act as an immunosuppressant, depending on different conditions in the body. As a general rule, excessive sugar consumption depletes the body’s nutrient balance, which triggers a cascade of inflammation and metabolic disruption. However, saying sugar is always bad for our health might be overgeneralized. For example, the effects of sugar on the immune system do differ depending on whether the host is infected with a bacterium or a virus. So it is not quite as simple as defining sugar as “good” or “bad” when it comes to immune health.

In order to understand sugar’s role in the immune system, we need to review phagocytes. Phagocytes are cells that protect the body by engulfing bacterial waste and small foreign particles. The process of phagocytosis differs from autophagy because phagocytes consume large particles, like bacteria and autophagy is the taking up, and repurposing of internal organelles - like the mitochondria. Phagocytes work to destroy particles like bacteria that could infect the host. There are five main types of phagocytes:

The Effect of Sugar on Phagocytes

A research study was carried out to observe how simple carbohydrates decreased the phagocytic capacity of neutrophils. Blood was drawn after an overnight fast and then at intervals of 0.5, 1, 2, 3, or 5 hours. The blood was then placed on slides and incubated in Staphylococcus epidermidis.

Participants were given 100g oral portions of glucose, fructose, sucrose, honey, or orange juice to observe the effects on the activity of neutrophils. Immediately after consuming simple carbohydrates (approximately one to two hours), there was a significant decrease in the phagocytic index, which means the immune function of phagocytes was suppressed. The effects lasted up to five hours post-feeding, confirming that the function of phagocytes was impaired by the consumption of simple carbohydrates. On the other hand, a fast of 36 or 60 hr significantly increased the phagocytic index (P<0.001). However, sugar did not affect the number of neutrophils.

Feed a Cold, Starve a Fever?

Professor of immunobiology at Yale, Ruslan Medzhitov challenged the ancient wisdom of starving a fever and feeding a cold. He explains that both viruses and bacteria can cause a fever. Medzhitov's research has brought him to the following conclusion:

He explains that we are not feeding or starving the bacteria or viruses, rather modulating the inflammation resulting from the infection. Depending on the source of inflammation, fasting has different consquences.

Medzhitov warns against oversimplifying the effects of eating when the body has contracted a bacterial infection or a virus. Medzhitov force-fed mice who were suffering from food-poisoning due to the bacteria Listeria monocytogenes and the mice died. To find out what micronutrients were responsible for their demise, the Yale team split the micronutrients and fed them separately.

Interestingly the Listeria mice survived when they were force-fed fats and proteins. However, when the infected mice consumed carbohydrates or glucose, they died. Starving the mice of sugar while they were infected with Listeria kept them alive.

Conversely, when Medzhitov and his team force-fed mice who had the influenza virus, they found that they were more likely to survive. The team at Yale concluded that glucose is required for survival in viral inflammation, however, it is lethal when treating bacterial inflammation.

Diet Can Shift the Microbiome in 24 Hours

Consuming carbohydrates that are rich in sugars, such as dates encourages the proliferation of good bacteria such as Bifidobacteria while reducing the growth of tumor cells. Suggesting that labeling sugar as bad, and an immunosuppressant may be inaccurate.

Conversely, when fed a high-fat or high-sugar diet, animal models showed circadian disorganization and loss in microbial diversity. The changes in the microbiota due to the diet shift can significantly alter inflammatory markers. Shifts in circadian rhythm in mice fed high-fat, high-sugar for 10 weeks also resulted in intestinal permeability, and reduced microbial diversity, which makes them more susceptible to injury and disease.

Effects of Fructose on the Body

Fructose is a common additive in processed foods. In fact, fructose now accounts for 10% of caloric intake in the United States. When consumed in small doses, fructose can be broken down in the colon. High doses of fructose, on the other hand, (over half a can of sugary soda) can damage the liver.

Fructose itself is not bad, but the overconsumption of it that can impact the body. Moreover, the ability of the body to break down fructose is dose-dependent and influenced by genetics. The availability of protein GLUT5, which can be a genetic factor, impacts how well a person can tolerate fructose. For some, excess fructose can lead to bloating, abdominal pain and bowel discomfort, as bacteria in the gut ferment the fructose, resulting in off-gasses.

The process to make HFCS was developed in the ‘70s so it's a relatively new addition to the human diet. HFCS is made from genetically modified enzymes and corn. When fed to male rats, HFCS led to young rats suffering from anemia, high cholesterol, and heart hypertrophy. These rats didn't reach adulthood and their female counterparts were infertile.

Other artificial sweeteners, like Saccharin (Sweet'N Low®, SugarTwin®), Acesulfame K (Sunett®, Sweet One®), and Sucralose (Splenda®) were previously thought to be a non-caloric sugar alternative. However,  artificial sweeteners have now been found to alter gut microbiota and drive the development of glucose intolerance.

It can be hard to get out of the cycle of eating junk food. Feeling flat or tired can lead to one or two trips to the fr...

END_OF_DOCUMENT_TOKEN_TO_BE_REPLACED

The Power of Peas

For those celebrating Thanksgiving this week, definitely have your family or friends pass the peas, please. Peas have be...