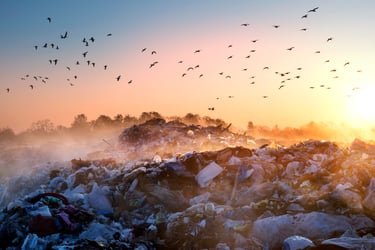 In a recently published Frontiers in Medicine review, the bidirectional interactions between environmental toxicants and the gut microbiota were examined, highlighting the complex relationship between the composition of the microbiota and xenobiotic metabolism. Given that for most people the greatest source of exposure to pollutants is via diet and water consumption, the gut microbiota is the first metabolic and immune interface with these compounds, a “discrete organ” of its own which both modifies toxins and is in turn modified by them.

On the one hand, exposure to pesticides, metals, and plastics have all been shown to modulate the microbiota in human and animal studies. For example, in a study of nearly 700 participants from Wisconsin, urinary levels of lead were associated with gut microbiota diversity, with significantly increased colonization by Proteobacteria, specifically Burkholderiales, linked to higher urinary lead levels. One important observation by the authors of this study was a potential impact of a high fiber diet; tertiles of dietary fiber consumption modified the effects of Pb on gut microbial composition. Even proximity to mining and smelting areas (and thus metal exposure) has been shown to modulate microbial composition. In another example, an association was found among children who had arsenic exposure via drinking water and a greater abundance of Proteobacteria, as well as the presence of E. coli strains which harbor arsenic resistance genes (strikingly similar to antibiotic resistant genes). In vitro, pesticides such as chlorpyrifos have been found to modulate metabolic pathways of bacteria commonly found in the human gut microflora, impacting folate and riboflavin synthesis and upregulating pro-inflammatory immune responses.

Glyphosate has been shown to inhibit beneficial microbiota in the gut and promote the overgrowth of pathogenic microbiota, including Bacteroides fragilis and Clostridium difficile. It inhibits the synthesis of aromatic amino acids via the shikimate pathway, which is essential for the survival of many species of gut microbiota. Concern continues to grow that this inhibition interferes with monoamine neurotransmitters synthesis, such as serotonin, dopamine and melatonin, and may at least partly explain the link between neurological disorders and exposure during critical periods of development (during pregnancy and lactation), reviewed here. Clostridium difficile production of p-cresol has also been linked to a variety of neurological diseases.

In a recently published animal study, ambient levels of PM2.5 were associated with changes at both the phylum and genus levels, including decreases in Bacteroidetes as well as increases in Clostridium sp. Greater exposure and/or longer duration of exposure was associated with intestinal inflammation and a damaged intestinal barrier, as well as a broad range of altered metabolic functional pathways, including those related to cell growth and death as well as lipid and energy metabolism. Air pollution also influences gut, microbial, and metabolic health.

Clearly, environmental toxins may select for specific microbial communities, and shift the genetic make-up and/or metabolism of the microbiota, as well as the concentration of harmful metabolites or beneficial ones. As mentioned above this relationship is bidirectional, i.e., the metabolism of xenobiotics also depends on the composition of the microbiota. As described in the Frontiers in Medicine review paper, the gut microbiota can inactivate, activate, or reactivate (following liver inactivation) multiple toxicants through a number of microbial enzymes, including beta-glucosidases, beta-glucuronidases, sulfatases, azoreductases, nitroreductases, and transferases. It’s worth noting that bacteria are predicted to have at least 3,000 cytochrome P450 enzymes compared to the 57 documented in humans, suggesting a vastly more potent ability to metabolize diverse compounds.

Environmental toxins can undergo direct metabolism by microbiota, as many are poorly absorbed, and can reach the distal small intestine. Alternatively, for some compounds which are first conjugated in the liver, metabolism by the microbiota may interfere with their excretion. For example, conjugates with glucuronic acid, sulfate or glutathione may be deconjugated by bacterial enzymes, prolonging their time to excretion.

There are many functional consequences to these interactions. For example, 4 polycyclic aromatic hydrocarbons (PAHs: naphthalene, phenanthrene, pyrene and benzo(a)pyrene) were found to lack estrogenic activity in vitro. However, transformation of these compounds by colon microbiota produced metabolites likely to have estrogenic and potentially toxic activity. Metabolism of methylmercury also appears to be dependent on bacterial enzymes, as animal studies have demonstrated an accumulation of mercury in many tissues, particularly the brain, when the gut microbiota is absent or suppressed (reviewed here).

Perhaps most important is to focus less on the interaction between any single compound and the gut microbiota, and more on the interaction of diverse mixtures of compounds, considering many environmental toxins are ubiquitous. For example, a cohort study in France found that in nearly 100% of pregnant women, the following compounds were detected (some of which were banned or restricted): bisphenol A, phthalate metabolites, pesticides (mainly pyrethroids), dioxins, furans, polychlorobiphenyls, brominated flame retardants, perfluorinated compounds and metals. Thus the idea that we encounter only 1 type of pollutant at a time is naïve. This focus on diverse mixtures of compounds was the subject of an excellent review in Toxicology Letters, with the conclusion that exposure to these chemicals induces gut dysbiosis and impairs metabolic functions of the microbiome in multiple pathways, leading to metabolic, malignant, inflammatory, or immune diseases. These findings emphasize the importance of continuing to elucidate gut-toxin pathways, and the potential for mitigating the harms of environmental toxins through modulation of the gut microbiome.