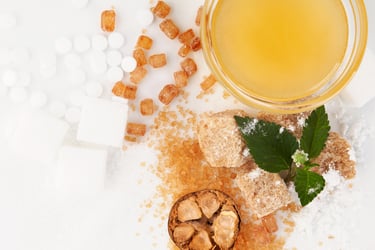 The evidence base continues to grow suggesting that fructose, from both dietary sources and endogenous synthesis, promotes the metabolic dysfunction that underlies the most prevalent health conditions, including diabetes, obesity, insulin resistance, metabolic syndrome, and fatty liver disease. To understand why, it helps to review the metabolic pathways driven by fructose, as well as the evolutionary underpinnings of these pathways.

Fructose, either as dietary fructose or endogenously synthesized fructose (via the aldose reductase-sorbitol dehydrogenase (polyol) pathway), stimulates fat and glycogen storage, and ultimately weight gain. This occurs for several reasons; fructose does not induce the same increase in insulin and leptin levels that glucose does, and fructose appears to be the primary cause of leptin resistance – not fat and not other carbohydrates. Given that leptin promotes satiety and provides feedback to limit caloric intake, frequent exposure to fructose is likely to lead to overconsumption and weight gain. Fructose also suppresses the action of glucagon-like peptide-1 (GLP-1) in the brain, further stimulating appetite.

Chronic fructose intake also induces white adipose tissue accumulation, some degree of which is influenced by genetic factors. Fructose stimulates adipogenesis, and animal studies have shown increases in visceral fat, pro-inflammatory adipokines, endoplasmic reticulum stress and a decrease in adiponectin signaling. Fructose metabolism increases triglycerides and VLDL production (fructose metabolites feed de novo lipogenesis), which induce adipogenesis by increasing PPARγ and aP2 (adipocyte protein 2) expression. Fructose metabolism (specifically the enzyme ketohexokinase), unlike metabolism of glucose, does not have negative feedback, and the phosphorylation of fructose proceeds at the expense of cellular ATP; continued exposure to fructose can exhaust cellular ATP. The degradation of ATP fuels the accumulation of uric acid, itself a contributor to many of the metabolic derangements associated with fructose. There are multiple other pathways which drive insulin resistance and hepatic fat accumulation, chief among them mitochondrial dysfunction, summarized well here and here.

Rather than focus on granular details though, a larger picture of the effects of fructose can be better understood through an evolutionary lens. In contrast to the current state in developed countries in which food is readily available, most of evolutionary history has been characterized by insufficiency and starvation. It has been postulated that there is an intracellular alarm signal, alerting an organism that food may becoming scarce, and that entering a “safety mode” of fat storage is desirable. It seems very likely that fructose is that signal, leading to a cascade of cellular responses which would enhance survival in lean times.

For example, the depletion of ATP and increase in uric acid production have been associated with insulin resistance, hepatic lipogenesis, blood pressure elevation, etc., all of which might seem like favorable responses if the goal is to prepare for shortages. This includes water shortages, as the oxidation of fat provides metabolic water; it’s likely that dehydration triggers an increase in fructose synthesis for this reason; fructose simulates vasopressin release (previously known as antidiuretic hormone), which further conserves water and salt reabsorption. This provides a likely explanation for the benefits of drinking water to lose weight as well as the contribution of dietary salt to fructose’s metabolic toxicity. So if the goal is to provide more fat and water stores, fructose accomplishes this nicely. Additionally, fructose stimulates cravings and drives foraging behaviors, ensuring as much consumption as possible.

Even insulin resistance starts to make sense; in times of shortage, insulin resistance prevents the entry of glucose to muscle cells but not to cells in the brain (or at least most of them). This preferential uptake of glucose by the brain protects it during times of scarcity, but chronic exposure to fructose (and the accompanying inflammation, oxidative stress and neuroinflammation) is also thought to increase the risk for cognitive dysfunction and Alzheimer’s disease.

An evolutionary lens also helps to understand the advantages of what seem like genetic disadvantages; that humans do not have the ability to synthesize vitamin C and must rely on dietary sources makes sense once it’s recognized that vitamin C interrupts the intentional oxidative stress fructose creates (and also why supplementation may improve metabolic syndrome). Similarly, an inability to catabolize uric acid seems like a detriment without appreciating the role it plays in activating this fructose-induced survival pathway.

Lastly, while many of the metabolic derangements can be attributed to fructose’s effect on the liver, fructose can also disrupt gut barrier integrity and lead to altered microbiota composition, resulting in systemic endotoxemia (and an inflammatory-cascade induced hepatosteatosis). While the small intestine provides a shield to the liver from small amounts of dietary fructose, larger amounts not only alter gut microbiota, (studies have shown a reduced proportion of Bacteroidetes, Bifidobacterium, and Lactobacillus, and an increase in Proteobacteria), but a maternal diet high in fructose has an epigenetic influence on their offspring, predisposing them for future diseases such as hypertension. Given that sugar intake has increased from about 4 pounds (per person per year) in 1750 to 160 pounds, and that fructose (the major component of high fructose corn syrup) has become something of a staple in the American diet, the metabolic pathways which might have once spared us from extinction may now be contributing to extensive morbidity and mortality.