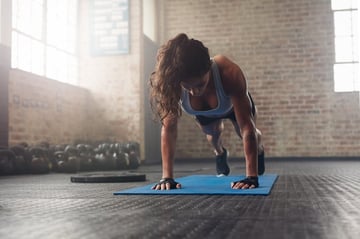 Exercise is good for us, yes? With its wide-range of benefits that include supporting heart, muscle and bone health, the short answer is yes. But could there be repercussions in over-exercising? For some people, yes; intense exercise can lead to leaky gut. In the literature, it is referred to as “exercise-induced gut permeability,” and the mechanism for damage stems from changes in blood flow and neuronal functioning. During exercise, blood flow is diverted from the intestinal tract. Also, changes in the nervous system work to decrease intestinal motility. Our bodies move the resources to the arms and legs, and away from the gastrointestinal (GI) tract. Similarly, stress of any kind can exacerbate leaky gut for the same reason. Adrenal hormones move resources away from the GI tract and into skeletal muscle, away from the intestines. In addition, any type of stress can cause oxidative damage.

The concept of leaky gut has been slow to infiltrate traditional medical circles. A compelling article sums up the current opinion, but there is a growing body of literature characterizing the nature of leaky gut. Many practitioners see it as the underlying cause of conditions such as chronic fatigue syndrome, migraines, multiple sclerosis, fibromyalgia, food sensitivities, thyroid abnormalities, mood swings, skin conditions and autism.

Material found within the intestines are technically outside of our bodies and need to remain there for proper functioning. The GI tract acts as a gatekeeper, allowing nutrients into the body, but also keeping toxins and microorganisms out of it. More than half of the immune system is near the GI tract, protecting us from foreign proteins and microorganisms. Leaky gut is a situation where things that are normally kept out of the body by intact GI mucosa are let in. As a result, leaky gut may put your immune system in overdrive as the body must address foreign invaders.

Changes in the GI tract during exercise can create or exacerbate symptoms like nausea, regurgitation, belching, side stitch, abdominal cramps, urge to defecate, flatulence, stomach pain, gastric acidosis, abdominal pain, constipation, heartburn, reflux, bloody stool, and diarrhea. In a review of published studies, the investigators found that intestinal damage and impaired function increased proportionally with the intensity of the exercise. The threshold for GI disruption was two hours at 60% VO2 max. This did not have much to do with the subject’s fitness level. In other words, being in better shape did not protect from the negative GI effects of intense exercise. Working out in the heat seems to exacerbate the gut disturbances. The authors concluded, “Strenuous exercise has a major reversible impact on gastrointestinal integrity and function of healthy populations. The safety and health implications of prolonged strenuous exercise in patients with chronic gastrointestinal diseases/disorders, while hypothetically worrying, has not been elucidated and requires further investigation.”

Strategies exist, however, to mitigate the stress that intense exercise puts on the GI tract. According to Dr. Ricardo Costa, lead author of the aforementioned review says, "Despite excessive exercise being confirmed to compromise gut integrity and function, we have identified several exacerbating factors which can be controlled, and several prevention and management strategies that can attenuate and abolish the damage and compromised function. It is recommended that a full gut assessment during exercise should be undertaken by individuals with symptoms of gut disturbances during exercise, to ascertain what is causing the issue and to develop individually tailored management strategies."

Another study looked at what could be done to protect the GI tracts of elite athletes. The double-blind, placebo-controlled study tested whether zinc carnosine and/or bovine colostrum (a natural source of growth factors) would help with the negative GI effects of intense exercise. It was a crossover study, with the volunteers taking placebo, zinc carnosine, colostrum or a combination of zinc carnosine and colostrum before undertaking exercise. After exercise body temperature increased 20 C and intestinal permeability increased as measured by five-hour urinary lactulose/rhamnose ratios. The authors concluded, “ZnC [zinc carnosine], taken alone or with colostrum, increased epithelial resistance and the TJ [tight junction] structure and may have value for athletes.”

Zinc carnosine and colostrum are only two substances that are useful for healthy intestinal support. Studies have not been designed yet, but other GI protective substances should also be beneficial to those who exercise intensely, especially when you consider what Dr. Costa had to say after the findings in his study. Clinical studies show other substances such as aloe, bone broth, L-glutamine, and MSM support the health and integrity of the gastrointestinal tract.