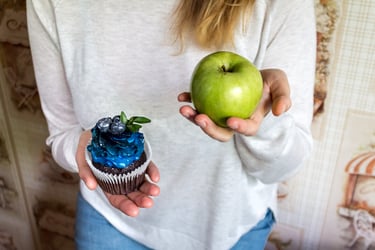 Everyone's gut microbiome is unique and evolving. Harmonizing the gut, by keeping the trillions of microbial residents in balance is a key to health and wellbeing. Whenever there is dysbiosis or a loss of diversity in the gut microbiota, there is often discomfort and disease can develop.  97 million Americans (between 10 and 30% of the population) suffer from digestive discomfort ie. gas and bloating. Understanding the role that microbes have in the digestive process and taking steps toward creating balance in this area can provide digestive relief.

Ensuring that our gut microbiota is both diverse and in balance should be the focus if we are to thrive. There are many things that we can do to help or hinder the tiny microbes in the gut. Stress, sugar, exercise, and diet can significantly alter the microbial terrain.  Recent studies have exposed that loss of gut diversity, motility, inflammation and bloating can be reversed by eating a diet that modulates gut bacteria.

In this article, we'll explore the many scientific advancements that are opening the door to optimizing health by creating a supportive environment for the microbes in the gut, through diet.

The Link Between Diet & Disease

Clear links have been made between obesity and a lack of diversity in the gut. The microbes in the gut have also been found to play an important role in the immune system, as well as,  impacting metabolic and neurobehavioral traits.

The gut microbiota has been identified as a potential factor in the pathophysiology of obesity and metabolic disorders. The population of microbes in the gut protects against gastrointestinal mucosa permeability, commonly known as” leaky gut”.

The microbiota regulates the fermentation of polysaccharides from carbohydrates. A microbial population that is high in bacteria that ferment carbohydrates can lead to both excess lipid storage and methane production. Increased gut permeability due to low microbial diversity has also been linked to chronic low-grade inflammation.

The gut microbiome has been identified as an organ or an environmental factor that regulates lipid storage in the body. Diet plays a pivotal role in the bacteria that reside in the gut. Some foods can hinder the production of beneficial microbes and up-regulate harmful bacteria.

Can gut microbiota science explain the link between diet and disease?

Archaea are ancient gut microbes that are methanogens, meaning that they produce methane in the gut. Archaea are more prevalent in the large intestine. A small population of archaea is not a problem. Issues surrounding an abundance of archaea depend largely on the size, diversity, and health of the gut.

Too many archaea can contribute to small intestinal bacterial overgrowth (SIBO). SIBO is normally treated with antibiotics. While antibiotics clear up the bacterial infection, they can also create gut dysbiosis. Restoring the GI tract after a round of antibiotics is essential for health.

What is Gut Dysbiosis?

When the ecosystem of microbes in the gut gets imbalanced or dysfunctional, we call this gut dysbiosis. This can be due to a change in diet, infection or a build-up of microbial byproducts like methane and hydrogen. The build-up of gaseous byproducts can lead to bloating and discomfort in the gut.

Gas and Bloating and the Microbiome

The underlying cause of bloating and inflammation can differ from one person to the next. This means there is no one size fits all solution. What is certain is that promoting balance and diversity in the gut will boost wellbeing.

It is estimated that 30-62% of people have methane-producing bacteria in their gut. Methanobrevibacter smithii is the predominant archaeon that digests polysaccharides in the human gut.

Inflammation, and bloating due to excess methane gas production can stagnate the gut. This has been found to be connected with delayed transit time. Ensuring that we consume a diet that supports the gut, rather than promoting the fermentation process is key. Methane gas is produced when there is anaerobic fermentation of undigested polysaccharides from carbohydrates.

Foods that promote friendly gut bacteria are of considerable interest, as they promote overall health. Research out of the University Medical Center Groningen in The Netherlands has exposed key food groups that are associated with high levels of friendly gut bacteria, as well as foods that are harmful to the microbiota. Researchers analyzed stool samples and found that there were correlations between food consumption and microbial groups.

This research is exciting as it offers a roadmap to health through science-backed dietary choices. The foods that they found that reduced populations of unhealthy aerobic bacteria and promoted healthy bacteria, were as follows:

Alongside consuming products that boost the diversity of the microbiota, we should also avoid foods that harm the gut. There were three key food groups that experts identified as decreasing beneficial bacteria as well as increasing inflammatory markers, these were:

Inflammation is implicated in all diseases and as such eating foods that reduce inflammation can promote health. Lead researcher Laura Bolte and her team at the University Medical Center Groningen found that the following 7 food groups promoted the proliferation of anti-inflammatory bacteria in the gut:

Lead researcher Laura Bolte concluded "We looked in depth at the association between dietary patterns or individual foods and gut microbiota. Connecting the diet to the gut microbiome gives us more insight into the relationship between diet and intestinal disease. The results indicate that diet is likely to become a significant and serious line of treatment or disease management for diseases of the gut - by modulating the gut microbiome".