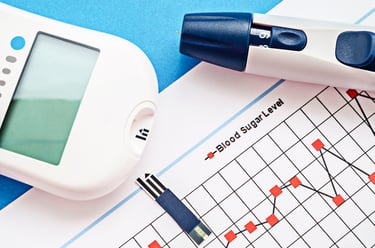 One limitation of both clinical trials and epidemiological studies is that they often gather only a fraction of the information potentially available for each study participant, and usually for a short period of time. While gathering important population-level data, they often lack a deeper dive into each individual’s unique physiology, without monitoring how it changes over time, and what variables are relevant to health and disease.

Taking a big step into the world of big data and multi-omics, researchers from Stanford published an important paper which vaulted over these typical limitations, deeply profiling the transcriptomes, metabolomes, cytokines, proteomes, and microbiome of 106 healthy individuals with prediabetes over a 4 year period. This was done to better understand the early stages of type 2 diabetes, and how the step-by-step transition from prediabetes to diabetes might occur. It remains one of the most comprehensive longitudinal studies of this type.

There were many important take-aways from this study. One was the finding that most of the -omics (i.e., the metabolome, microbiome) stayed fairly stable during periods of health, but could undergo significant shifts during periods of stress, particularly during respiratory viral infections (RVIs).  For example, during an RVI, 2,026 transcripts, 11 cytokines, 145 metabolites, 29 proteins, 11 gut microbial taxa, 30 nasal microbial taxa and 25 clinical laboratory tests shifted significantly from values obtained during a healthy period. Surprisingly, in addition to immune pathways (such as interleukin, B and T cell signaling, and other pro-inflammatory cytokines) which might have been expected to be activated during this period, neurological pathways (related to neuro-inflammation and Huntington’s disease), cardiac hypertrophy, as well as metabolic pathways related to insulin receptor and leptin signaling were also activated. Microbiota in the gut changed during periods of infection too, including increases in Ruminococcus, Barnesiella, Alistipes, Rikenellaceae and Bacilli, with nearly opposite changes in the nose, suggesting a coordinated response. Furthermore, several markers of gut microbiome diversity, such as indolelactic acid and hippuric acid were found to correlate with insulin resistance. (Hippurate has previously been shown to correlate with fruit and whole grain intake as well as microbial diversity, with higher levels associated with a lower risk for the metabolic syndrome in a large study of female twins).

The implications here are that RVIs increase the risk for metabolic diseases such as diabetes, and also that individuals with insulin resistance have a less robust immune response, and may be more vulnerable to RVIs.

It’s well accepted that diabetes increases the risk for infection. Indeed, hyperglycemia among people with diabetes has been shown to be a risk factor both for infection risk as well as greater morbidity resulting from infections. This deep analysis of the metabolic pathways suggests prediabetes should also be a cause for concern, and there are likely several mechanisms. A previous study of Danish adults with prediabetes found significant shifts in 5 bacterial genera when compared to healthy adults; specifically, reduced populations of the genus Clostridium and the mucin-degrading bacterium Akkermansia muciniphila. Greater species diversity was associated with better glucose control and less adiposity and inflammation, including strong inverse correlations with triglycerides and hs-CRP.

Metabolism of polyphenols by the gut microbiota has been shown to mediate a number of metabolic benefits, including links to blood pressure and obesity. However, individuals with an elevated BMI and prediabetes have been shown to have impaired metabolism of these compounds as result of changes in the microbiome, even when compared to individuals without prediabetes that also have an elevated BMI. A low-grade endotoxemia (increased lipopolysaccharides or LPS levels) has also been observed among individuals with impaired fasting glucose, as well as increased gut permeability and platelet activation.

The broader implication is that increasing blood glucose levels are associated with reduced diversity of the microbiota, which in turn is linked to disruptions in both inflammatory and metabolic pathways, including a reduced ability to harvest all the benefits of a phytonutrient rich diet. Additionally, the accompanying insulin resistance impairs the normal immune response to common infections, potentially predisposing to an increased susceptibility to a variety of pathogens. This theme has also been observed with metabolic-associated fatty liver disease, in which infections may worsen progression of the disease and promote inflammation, while liver disease itself may also impair the immune response to infection.  It seems likely then, that targeted interventions to improve microbial diversity, insulin resistance and glucose control may also tamp down several metabolic and neurologic inflammatory pathways, as well as help to increase a more robust and rapid immune response.

It can be hard to get out of the cycle of eating junk food. Feeling flat or tired can lead to one or two trips to the fr...