Taking a Second Look at Magnesium and Vitamin D

The magnitude of magnesium’s importance in the human body cannot be understated. This master mineral is the fourth most abundant element in the human ... 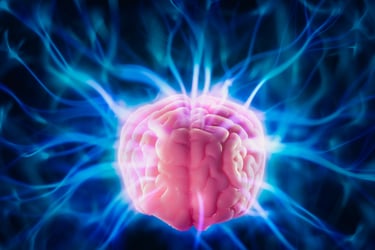 How our brains function is more complex than ever imagined. For a long time, the brain was thought to be compartmentalized, specialized and fixed. In fact, in the 1970’s a group of neuroscientists set out to prove that was the case. Interestingly neuroplasticity was discovered while trying to prove quite the opposite. The truth is, the brain changes continuously and in response to experiences throughout life; this ability to change is called neuroplasticity. This finding provides hope for improving states of mind by altering environmental conditions.

A number of studies support the connection between mental health struggles and a dysfunction in the modulation of brain circuits. For example, the GABA and glutamate–glutamine cycle can now be monitored with magnetic resonance spectroscopy (MRS) to provide key insights into mental health. In a recent study, the glutamatergic abnormality was found to be related to depression as well as anxiety. Balancing out glutamine and increasing GABA could protect the integrity of the brain by reducing excitotoxicity and preserving grey matter.

To soothe the brain, levels of GABA (the brain’s inhibitory neurotransmitter) must be increased. However, it is not as simple as supplementing with GABA as glutamine can be synthesised from GABA. Calming brainwave activity by inducing alpha and theta brain oscillations has been found to relax the brain.

What are the Different Types of Brain Wave States?

Thoughts, emotions, desires, perceptions and behaviours are all managed in the electrical pulses of the brain.  The brain is made up of an intricate network of neurons and receptors that fire in relation to various internal and external stimuli. Therefore, if we change the stimulus, we can literally alter our frame of mind.

The known brainwaves are - infra-low, delta, theta, alpha, beta and gamma. Here is a brief outline of each type of brainwave oscillation:

Beta waves (12 to 38 Hz): Our normal waking state that can be split up into three sections- Beta1, Beta2 and Beta3:

What Are Gamma Brain Waves?

Gamma brain waves were only discovered in the 20th century. Before 1924, when Hans Berger invented the EEG (electroencephalography) machine, gamma frequencies could not be measured. Gamma brain waves are the highest and fastest neural oscillations.

Since 1924, neuroscientists have made massive advancements in EEG technology, which has allowed the measurement of high frequency emotions like empathy, compassion and love, which expands our understanding of emotions and their effects on the human condition. Gamma brain waves have been observed in long-term meditators.

One study analysed a cross section sample of 110 individuals and concluded that prefrontal glutamine levels were elevated in early phases of mood disorders. Glutamine is an α-amino acid and the principle metabolite of glutamate, the brain's most abundant excitatory neurotransmitter. Increased glutamine levels were found in another study of patients with negative mood. Altered GABAergic and glutamatergic functioning has also been established in patients with social anxiety, specifically glutamine was found to be higher and GABA levels were lower in these subjects.

Sleep Disturbance and the Brain

The key receptors being studied by many mental health researchers are GABA receptors and glutamate receptors. Sleep and mental health have long been known to have a bi-directional relationship. In fact, certain mental health challenges can be measured by changes in markers of dopamine and γ‐aminobutyric acid (GABA) in various regions of the brain. Hypersomnia is observed during depressive phases when patients can find it had to get out of bed and sleep deprivation is also known to trigger mania in some patients.

The healthy brain needs to spend most of its time in the infra-low, delta, theta, alpha and low beta states. These are the brainwave oscillations that help the brain to relax and regenerate. Too much excitement is physiologically related to excess glutamine/ glutamate and ultimately can result in deterioration of neuronal cell bodies, neuropil, glial cells synapses, and capillaries (collectively known as grey matter). Taking measures to increase GABA by reducing the effects of glutamine can produce a calmer, healthier brain.