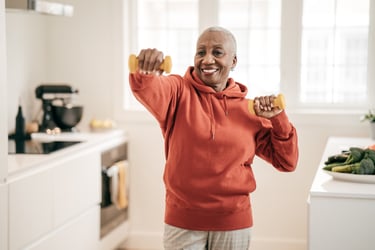 Though it is well known that diet can certainly modulate the composition of the gut microbiota, we are only just beginning to understand how exercise affects your gut and gut microbiome. However, considering the many roles of the gut in the development and maintenance of overall health, it is not surprising that there is great interest in the link between physical activity and gut health and the mechanisms at work behind the scenes.

Gut microbes, or the gut microbiota, can weigh up to 2 kg, and it plays a vital role in digestion, metabolic function, and resistance to infection. In healthy humans, it has an enormous metabolic capacity because it is made up of over 1000 different unique bacterial species and over 3 million different genes, collectively known as the microbiome.

Animal and human studies have now both shown how exercise changes the gut microbiota.

Over a dozen controlled animal studies have demonstrated how physical exercise independently modifies the gut microbiota’s composition and functional capacity.

In 2008, Matsumoto et al. were the first to find that 5 weeks of exercise training caused significantly higher n-butyrate concentrations in the large intestines of rats. Butyrate may be a key player in the relationships between exercise and gut health. Butyrate is a prebiotic short-chain fatty acid produced during the bacterial fermentation of dietary fiber in the colon. Butyrate has been shown to increase colonic epithelial cell proliferation, promote gut barrier integrity, and regulate the host immune system and gene expression. Recently, butyrate has received particular attention for its beneficial effects on intestinal homeostasis and energy metabolism.

Butyrate exerts its influence by acting as a histone deacetylase inhibitor, which involves the epigenetic regulation of gene expression, or signaling through several G protein-coupled receptors in cell membranes. Histone deacetylase inhibitors are chemical compounds with a long history of use in psychiatry and neurology as mood stabilizers and anti-epileptics, and they are being studied for their further-reaching benefits. With anti-inflammatory properties, butyrate enhances intestinal barrier function and mucosal immunity.

Several other studies have backed up Matsumoto et al’s finding, showing that exercise training boosts the abundance of butyrate-producing microbes.

Drawing other broad conclusions as to how and to what degree exercise alters the rodent gut microbiota has proved challenging due to incongruities in diet, species/strain, animal age, and exercise modality used. A good example is that some studies suggest that exercise increases the ratio of Firmicutes to Bacteroidetes bacterial types, whereas others show that exercise could reduce this ratio. Still, others have found no change at the phylum level of organism grouping.

However, one of these from 2016 did uncover that mice which exercised were host to Faecalibacterium, clostridium, allobaculum and others, where sedentary mice were not. Facealibacterium prausnitzii, which was found in the active mice’s guts, is the most abundant bacterium in the human intestinal microbiota of healthy adults. In fact, it is used as a sensor of health, particularly for active Crohn’s disease patients, and is seen as a potentially novel probiotic for human diseases like IBD and IBS. Clostridia is a class of anaerobic bacteria mainly found in soil, and a few of them are responsible for producing very toxic substances. An example is C. difficile. However, Clostridium butyricum is a highly beneficial probiotic, which has been linked to a significant reduction in the incidence of entero-hemorrhagic infections caused by E. coli, as well as a stronger immune response, significantly increased nutrient absorption in your gut and reduced inflammation.

When looking at the disparate results from these studies, it is possible to find some clues as to why they occurred. For example, it was recently reported that voluntary wheel running (VWR) and forced treadmill running (FTR), which are the two most common modes of endurance exercise used with rodents, alter the gut microbiota in different ways, particularly when it comes to diversity and when changes are also made to the animals’ diet.

Cross-sectional studies were the first to show us the role of exercise in modifying the human gut microbiome. A study on professional rugby players in comparison to lean, sedentary controls revealed more alpha diversity, or variation of microbes in a single sample, and a higher abundance of 40 different bacteria than the sedentary controls.

In more recent trials, researchers have compared the microbiome of active women with sedentary controls and found that women who completed at least 3 hours of exercise per week had more Faecalibacterium prausnitzii, Roseburia hominis, and Akkermansia muciniphila. F. prausnitzii and R. hominis are known to produce butyrate.

Further studies have explored how microbiota composition and metabolic capacity are affected by cardiorespiratory fitness. Researchers from American universities found that a higher ratio of Firmicutes to Bacteroidetes, the two main bacteria types in the human gut microbiota, was significantly linked to oxygen uptake. This has been supported by evidence collected when working with young adult athletes. It also unveiled that athletes can have different gut microbial pathways for amino acid biosynthesis and carbohydrate metabolism, as well as greater fecal concentrations of short-chain fatty acids like butyrate.

Unfortunately, active people usually eat different types of foods to sedentary individuals, and these cross-sectional studies are somewhat limited in their ability to increase our understanding of the exercise-gut connection. Increasing protein intake in professional sportspeople, for example, can change their gut microbiota considerably.

Longitudinal studies have provided some interesting additional data. A 2018 longitudinal study enrolled 32 sedentary adults who were either lean or obese and they participated in a 6-wk supervised endurance exercise program. This included 30- to 60-min of exercise, three times per week. They were also prescribed stringent dietary controls. The results showed that only lean, sedentary people who exercised developed higher bacterial counts for Lachnospira, Roseburia and again, Clostridia and Faecalibacterium. Lachnospiracaea is a family that includes Lachnospira and Roseburia. A decrease in Lachnopsiracae bacteria is linked to a wide range of health problems, including chronic liver failure and autoimmune disease. Roseburia is a key butyrate producer. In obese people, however, the exercise reduced Faecalibacterium species. Bacteroides species increased in the obese subjects, too. However, overall, the positive changes were experienced by the lean participants. Interestingly, the bacterial increases and positive changes in the gut of all the people studied were temporary, and within another six weeks of a sedentary lifestyle, the effects of the exercise were reversed.

Studies similar in design have shown that short-term exercise, with or without whey protein supplementation, could alter microbiota diversity for the better in overweight or obese men and women. Other researchers found that six weeks of light- to moderate- intensity cycling increased the abundance of A. muciniphila and decreased Proteobacteria in previously sedentary overweight women. The metagenomic analysis they performed revealed that the cycling activity decreased the abundance of certain genes related to fructose and amino acid metabolism.

We can conclude from all of this evidence that exercise has an independent effect on the gut microbiota, yet the training should be aerobic, intense enough and go on long enough to be able to make significant taxonomic and metagenomic modifications. Lean individuals may have more to gain from exercise interventions.

Potential Mechanisms Behind The Gut-Exercise Connection

A number of potential mechanisms have surfaced about how exercise is able to directly affect the gut microbiota. The first is through the immune cells that are located in close proximity to microbial communities and produce antimicrobial factors needed for mediating microbial homeostasis. A related idea is that exercise may impact the integrity of the gut mucus layer, which keeps microbes from adhering to the gut epithelium and is an important substance for some types of bacteria such as A. muciniphia.

The second is that since exercise raises the core temperature of the body, and there is a reduction in intestinal blood flow during high-intensity exercise, there may be a briefly but significant level of contact between the gut mucosal immune system and the microbes in the gut and mucosa, leading to a temporary altered environment for microbial communities in the gut. Another theory is that exercise is a stressor that leads to beneficial adaptations and resilience in the gut barrier.

Others have suggested a possible role of the nervous system in the microbiota changes because exercise already reduces transit time and accelerates the movement of gas through the intestinal tract. These local and global shifts could have a considerable effect on intestinal pH, biofilm formation, the availability of nutrients to microbes, and other factors. A final potential mechanism is that lactate secreted into the gut could alter the pH of the intestines as a result of the increased lactate blood levels that occur during exercise. Further research is necessary to identify the key mechanisms behind the adaptation of gut microbiota to exercise.