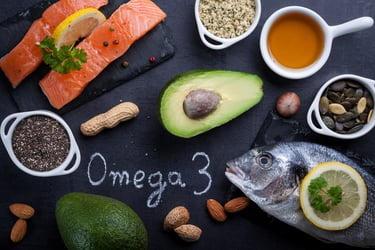 Boosting your immune system is one of the most beneficial steps that you can take to enhance overall health, and now more than ever we would like to do what we can to optimize our health.

One of the foundational approaches is to ensure that your diet is healthy, balanced and replete with fresh whole foods. And with an emphasis on balance, there are several nutrients that are vital for the immune system to function effectively. Back in the 1970s, scientists discovered that a balance of essential fatty acids played a part in the functioning of the immune system. This research went largely unnoticed because of the seeming lack of fatty acid deficiency in the population.

In this article, we’re going to explore the connection between omega-3 fatty acids and the immune system.

The Building Blocks of Cell Membranes

Many people are aware of the heart-protective qualities of omega-3s, however, more recently researchers have been looking into using fatty acids to support healthy inflammation and immunity.

Omega-3 polyunsaturated fatty acids (n-3 PUFAs) are part of the building blocks of cell membranes. They are also known as EFAs (essential fatty acids) because they cannot be created in the body, and as such must be consumed in the diet.

N-3 PUFAs are made up of a kind of fat (also known as a lipid). Lipids are compounds that have poor solubility in water. The lipid-solubility of a cell membrane influences how easily particles can permeate the cell wall. Therefore, consuming omega-3 fatty acids strengthens the cell walls, including the membranes of the immune cells.

Which Omega-3 Products are Best?

Although omega-3 fatty acids are great for overall health, you must make sure that you look for the most pure products available. Fish can absorb contaminants from their environment, such as heavy metals, chemicals, and microplastics. For this reason, care should be taken to find foods, or supplements that are free from these contaminants.

Omega-3 fatty acids are susceptible to oxidation, and as such must be carefully handled and stored so that their beneficial properties are kept intact. The bioavailability of omega-3s is highest when the source is pure and the producer takes great care to ensure that the fish oil is tested for contaminants.

Your immune system is your body's defense system; it fights off foreign particles that enter the body to ensure that all systems are functioning smoothly. Interestingly, the immune system has a memory that is used to ward off pathogens that it has experienced in the past.

Do Omega-3s Help the Immune System?

Thanks to hundreds of research papers, we’re beginning to paint a clear picture of the relationship between omega-3s and the immune system. We used to think that omega-3s simply suppressed inflammation, due to the action of docosahexaenoic acid (DHA) and eicosapentaenoic acid (EPA), but recent research shows a more detailed influence.

One study published in the Journal of Leukocyte Biology in 2013 found that DHA- and EPA-rich fish oils enhance the function of B cells. B cells are a type of white blood cell produced to fight pathogens and ward off disease.

Omega-3 fatty acids consumed via the diet incorporate into the cellular membranes (the area that separates the interior and exterior of cells), which includes your immune cells, thereby enhancing cell function. Immune cell membranes change when fatty acids are consumed.

“Lipid rafts” is a scientific term used to describe the composition of the cellular membrane. Recently, scientists have found that omega-3 fatty acids can help remodel the cell membrane (or lipid rafts) in T-cells (immune cells), which means that consuming omega-3s can strengthen the immune cells.

How Omega-3s Can Help Your Body Eliminate Pathogens

A type of white blood cell called a macrophage plays a key role in eliminating pathogens from your body. They patrol a wide range of organs in your body for invading pathogens. After they recognize a pathogen they recruit other immune cells from both the innate and adaptive immune systems, so that they can mount an effective immune response.

Omega-3 fatty acids impact macrophage function by producing cytokines, which are a key component in the communication between immune cells. Omega-3s also aid in the production of chemokines, which attract immune cells to the infected area. Macrophages also ingest the foreign materials, a process that is aided by omega-3s.

All of the boosted macrophage activity with omega-3 fatty acids is due to changes in gene regulation. In the immune system, the main changes are due to the DHA component of omega-3s. Furthermore, macrophages can be activated to promote tissue repair.

The Six Sources of Omega-3s (plus recommended daily dose)

Why is fish such a good source of omega-3s? Fish eat algae that contain high levels of EPA and DHA. In some cases invertebrates like oysters produce DHA and EPA from microalgae that don’t contain both EFAs. It’s important to note that seafish can contain high levels of mercury and should be avoided. Instead, opt for more sustainable fish, such as anchovies. The six sources of omega 3 are:

Omega-3 fatty acids play a massive role in the immune system. They strengthen the cell walls, help macrophages engulf pathogens and aid in eliciting a strong immune response, in the presence of a virus, pathogen or bacterial invasion. Most people in the west consume 10% of the recommended daily dose of omega-3 fatty acids, an amount not sufficient enough to support optimal immune function.