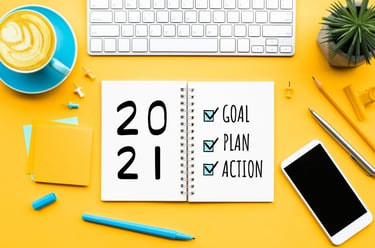 New Year’s resolutions, though often derided, offer an excellent opportunity for self-improvement, according to research on human behavior. However, we are gradually developing a deeper understanding of how to make them work better for us.

It’s All in the Brain

Researchers have discovered two areas in the brain that are in charge of habits: the basal ganglia, which is partly responsible for motivation and inhibition, and a small region of the brain’s prefrontal cortex, where most thought and planning occurs.

However, science is still exploring why some habits are easier than others to pick up, while others are more difficult. However, we do know that there are thousands of ways to make new behaviors become routine.

Yet why the specifics may be different, researchers at MIT have uncovered one common characteristic in the way everyone adopts new habits. When we rewire our brains by practicing new behaviors, we actually form habit loops of communication in the regions of the brain that run habit-forming and follow-through. Ann Graybiel and her team at MIT have shown that the straitum vital for forming new habits. When you undertake an action, the prefrontal cortex, involved in planning complex tasks, communicates with the striatum, which sends the needed signals to trigger the movement.

These automatic habit loops can be created over time as input from your prefrontal circuits fade, to be replaced by loops that link the striatum in your brain (key to habit-forming) to the sensorimotor cortex. These loops, along with the memory circuits, allow us to carry out behaviors without consciously thinking about them.

Understanding this process could make creating new habits faster and a lot more effective. However, it is also important to understand how resistance can counteract your efforts.

Psychologists have identified three primary sources of resistance to getting anything accomplished, no matter how small the goal.

The first is resistance to the idea that you have to complete a task. The solution is modifying how you think from “I have to” to “I choose to”, melting the resistance. By shifting your focus in this way to the benefits of your actions, the motivation can return.

The second type of resistance is caused by approaching a task that goes against your values, morals or beliefs. An example might be having to work overtime when you have young children at home that you would much prefer to spend time with. To deal with this category of resistance, you have two options: switch the task out for another one, or add value to the task you’re doing by finding or making a reason why it will positively benefit you, your family or your community.

The final and most common variety of resistance comes about due to feelings of inadequacy or lacking the skills to complete the job. Feeling like your going to fail is not usually compatible with motivation. The solution, however, could be as simple as realizing that effort creates excellence, and practice makes perfect. Asking for support where you need it can also help combat the “I can’t do this” resistance.

Another relationship that underpins your ability to form new positive habits is motivation vs. willpower. So no discussion on the science of motivation and habit forming would be complete without also looking at the science around about ability to get things done.

One of the most interesting recent discoveries in this area has been the realization that willpower is a finite resource. Columbia University researchers found that judges tend to make more rulings in favor of prisoners at the start of each of their three decision-making sessions. However, rulings made later in the sessions were far more likely to favor the judges’ interests, which the researchers call decision fatigue. The study results suggest that the more decisions you make, the more likely you are to become fatigued by those choices. Your willpower diminishes, and your ability to honor your motivations declines.

To make 2021 your best year yet, make light work of keeping motivated by using the following tips of habit-forming success:

Developing solid routines, tackling important priorities fist, and eliminating unnecessary commitments can also help prevent decision fatigue. From the moment you wake up, you make choices about how you’ll spend your time and what you’ll focus your attention on. However, many of those important decisions can be made into a routine that encourages you to attend to what matters most to you and allows you to succeed in whatever it is that attracts you.

2. Link Your Goals to Your Purpose

Linking your goals with an overall purpose in life can help your actions become more stable and far-reaching, and self-organizing.

Stanford psychologist William Damon and his colleagues define purpose as: “a stable and generalized intention to accomplish something that is at once meaningful to the self and of consequence to the world beyond the self.” They also include three components into their definition.

a) Purpose is more stable and far-reaching, in contrast to simpler day-to-day objectives, such as traveling to work

The self-organizing function of linking your goals to your purpose means that it provides a framework for systematic behavior pattern changes in everyday life by being strongly associated with your identity, personality and overall motivation. It can bring meaning to your goals and help you overcome resistance by believing more in their importance not only for you but for others, too.

As clinical psychologists, Todd Kashdan and Patrick McKnight explain in their paper in Review of General Psychology, “A purpose in life ought to stimulate behavioral consistency; serving as the motivating force to overcome obstacles, seek alternative means, and maintain focus on the goal in spite of changes to the environment that may interfere with the pursuit […] The negligible effect, for people with strong purpose, represents perseverance against barriers or resilience.”

It is possible to make your new habits automatic by biohacking the connections deep inside your brain. To create these new habit loops in line with your purpose and goals, first identify the routine. This might be as simple as reading daily, staying more organized or go to bed earlier. Next, experiment with rewards. Every habit, though we might not be conscious of it or willing to admit it, is driven by some kind of craving, such as to escape boredom, feel connected or relieve stress. Experiment with healthy rewards such as relaxation or social connection.

Then, select a cue, or a trigger that lets your brain know that it’s time to begin the routine. The easiest cues are already happening in your life, such as being close to the local gym on your way home from work or sitting on the couch close to the bookshelf where your study materials are stored. Find your cue and connect the new habit.

Lastly, practice your new behavior to create the habit loop. Set up reminders on your phone or post-it notes to help you remember the change you want to make. And plan an if/then routine to keep yourself on track. So if you really don’t feel like studying to become a more knowledgable practitioner, you’ll read something else for 10 minutes before studying for 20 minutes.

4. Keep Going For One Month

Several years ago, a group of 120 students at the University of Chicago were recruited by a team of economists to participate in an experiment on exercise habits. A randomly assigned third of the students were paid $175 for attending an information session and giving the researchers permission to track their gym attendance. Another third was paid when they attended the information session, allowed their gym attendance to be tracked and went to the gym at least once in the following month. The final group of students were compensated for attending the sessions, allowing their gym attendance to be tracked and going to the gym at least eight times over the next 30 days.

As expected, the group who were given money to go to the gym eight times to get paid exercised more than the other groups. However, what is fascinating is what happened once the payments had stopped: The students who had just finished a month of regular exercise activity kept returning to the gym at a far higher rate than the other participants. On average, they attended the gym nine times over the following seven weeks. This study shows that if you can engage in a new behavior for as little as one month, you may have formed a positive new habit that will pay off for longer than you imagine.