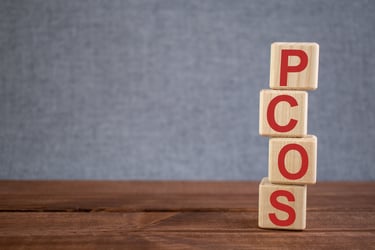 Polycystic ovarian syndrome (PCOS) is the most common endocrine disorder among women of reproductive age, affecting as many as 1 in 10 women in the US. It’s a major cause of infertility—the prevalence of infertility in women with PCOS may be as high as 70-80%. But even for those who don’t plan to have children, PCOS can have a substantial negative impact on quality of life, bringing with it acne, irregular periods, facial hair, mood swings, and more. Fortunately, nutritional interventions have been shown to be effective for helping to improve hormone balance and restoring fertility in affected women. Reducing dietary carbohydrate intake and supplementing with inositol are two strategies that may be beneficial.

Chronically elevated insulin has been identified as a major causal factor in PCOS. It’s not often that the scientific literature includes the word “causal.” Typically researchers state that there are “associations” and “correlations” between the factors in question, but with regard to PCOS, “Hyperinsulinemia associated with insulin resistance  has been causally linked to all features of the syndrome, such as hyperandrogenism, reproductive disorders, acne, hirsutism and metabolic disturbances.”

With that in mind, it stands to reason that dietary approaches that lower insulin levels may be helpful for women with PCOS. Carbohydrate restriction has been shown to favorably impact hormone levels in this population. In a small pilot study of overweight or obese women with PCOS, after 24 weeks on a ketogenic diet, the mean free testosterone level and LH/FSH ratio both decreased by 30% or more and the mean fasting insulin level dropped by over 50%. Moreover, two of the five subjects became pregnant during the study despite previous struggles with infertility. A more recent study showed that a ketogenic diet plus phytochemical extracts led to reductions in free testosterone, fasting insulin, HOMA-IR, and the LH/FSH ratio. Among obese women with PCOS, 8 weeks of an ad lib low-carb diet resulted in substantial weight loss (mean 8.1 kg) and a reduction in fasting insulin of nearly 20 μg/mL. This study is interesting because it shows that impressive results can be gotten without deliberate caloric restriction and with a diet that’s more liberal than a strict ketogenic diet, which may be difficult for some to adhere to.

Turning toward inositol, this compound was once considered to be a vitamin (B8) but it is generally synthesized in adequate amounts by the body, so it is no longer classified as an essential nutrient. It is available in two main supplemental forms: myo-inositol (MI) and D-chiro-inositol (DCI). Supplementation with one or both has consistently been shown to favorably impact the hormonal imbalances characteristic of PCOS. Inositol-dependent phosphoglycans may play a role in insulin sensitivity. This may be one of the mechanisms by which metformin positively impacts insulin sensitivity in PCOS—by stimulating release of these phosphoglycans. Researchers have speculated that an inadequate concentration of DCI or a problem with tissue use of DCI might contribute to insulin resistance by limiting the availability of the phosphoglycans needed for proper insulin action.

In obese women with PCOS, compared to placebo, daily DCI supplementation for six to eight weeks led to substantial reductions in fasting insulin, serum androgens, and fasting insulin area under the curve during an oral glucose tolerance test. Within six weeks, 86% of the women taking DCI ovulated compared to 27% of the women taking placebo. Similar findings have been observed in other studies in obese women with PCOS who supplemented with DCI: lower androgen levels, improved insulin sensitivity, and a lower LH/FSH ratio. The magnitude of the results was greater among subjects with a first-degree relative diagnosed with type 2 diabetes.

It’s possible to supplement with MI or DCI on its own but the combination of both appears to be more effective than standalone supplementation with MI, at least for some of the metabolic factors, such as insulin sensitivity. There is also concern about potential adverse effects of supplementing with DCI alone, including possibly exacerbating a localized “myo-inositol deficiency” seen in the ovaries of women with PCOS. The precise ratio of MI to DCI hasn’t been established, but studies that show efficacy favor a substantially higher amount of MI compared to DCI. Several studies indicate that a ratio of 40:1 is the most effective for restoring ovulation and inducing the largest improvements in several hormones, but a 10:1 ratio has also been shown to lead to significant improvements in free testosterone, fasting insulin, and the FSH/LH ratio.

It is worth noting that the studies employing low-carb or ketogenic diets in women with PCOS did not include inositol supplementation, so it’s certainly possible to see significant improvements in the affected hormones and metabolic parameters without added inositol. But for those who would prefer a different dietary approach, supplementing with inositol may be useful for favorably impacting the hormonal and metabolic dysfunction seen in PCOS.