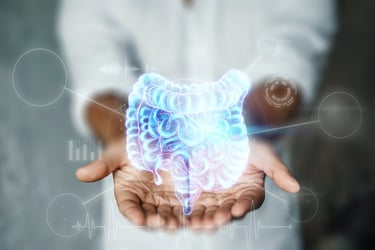 Recently published in Current Developments in Nutrition, a double-blinded randomized cross-over trial compared the effects of a catechin-rich green tea extract (GTE) to placebo on several markers of metabolic health and intestinal inflammation among healthy participants, as well as those with metabolic syndrome. Forty participants (roughly half with metabolic syndrome) received 1g GTE per day or placebo for 28 days (with a 1-month washout period between treatments) while following a low polyphenol diet to limit confounding effects. This dose of GTE was chosen to approximate the catechin content found in 5 cups of green tea consumption, providing 890 catechins per day. In addition to fasting glucose, insulin, and lipids measured on days 0, 14, and 28, fecal analysis of calprotectin and myeloperoxidase provided an estimate of intestinal inflammation.

GTE consumption was associated with a reduction in both calprotectin and myeloperoxidase in both groups (healthy and metabolic syndrome). Similarly, fasting glucose was reduced in both groups, despite no overall change in insulin or lipid levels. However, after controlling for other variables, a change in myeloperoxidase was associated with improvements in fasting insulin, suggesting that intestinal inflammation may play a role in glucose and insulin regulation.

This is not the first study to suggest an important relationship between intestinal inflammation and a subsequent increase in gut permeability and impaired glycemic control. For example, both gestational diabetes mellitus (GDM) and intrahepatic cholestasis of pregnancy (ICP) were associated with greater plasma levels of zonulin, the chief protein responsible for regulating tight junctions between intestinal epithelial cells (as well as hepatocytes, enterocytes, etc.). The coexistence of GDM and ICP was associated with even greater zonulin levels than either condition alone. Zonulin levels have been suggested to be a fairly sensitive early screening tool to predict the onset of gestational diabetes, indicating an important relationship between impaired intestinal epithelium and characteristics of metabolic syndrome.

Indeed, although causality has not been demonstrated, hyperpermeability of the intestinal barrier has been associated with many chronic diseases, including depression, diabetes, heart failure, and non-alcoholic steatohepatitis to name a few. An increase in zonulin release points to the development of a vicious cycle; a gut barrier defect that allows for an increasingly greater influx of dietary and microbial antigens, leading to release of pro-inflammatory cytokines which drive these chronic inflammatory diseases. Although the utility of commercial assays of zonulin (do they accurately measure pre-haptoglobin 2 vs. the zonulin family of peptides?) is an important consideration, the principle of gut permeability as a source of chronic inflammation is generally supported by clinical studies.

An important contributing factor is likely to be inflammation resulting from dysbiosis. In a previous analysis, plasma lipid levels, fasting glucose, HOMA-IR, C-reactive protein, and other inflammatory markers were elevated in 86 participants with metabolic syndrome compared to a group of 42 healthy controls. Additionally, lipopolysaccharide (LPS, from Gram-negative bacteria) was both elevated and associated with many of these analytes, as well as gene expression and protein levels associated with endoplasmic reticulum stress. This provides yet another pathway by which intestinal inflammation may impair cellular function and drive inflammatory pathways that promote metabolic disease.

High LPS activity, a.k.a. endotoxemia, has previously been linked to metabolic dysfunction and cardiovascular disease. Obesity, diabetes, fatty liver disease, and a high fat diet have all been linked to a 2-3 fold increase in LPS. For example, in a cohort of over 7,000 individuals, higher levels of LPS were found to be related to both incident and prevalent diabetes, with a hazard ratio of 1.004 per each unit of LPS increase. Thus, in the highest quartile, the risk for incident diabetes was 52% higher than in the lowest quartile. Somewhat strikingly, this association was independent of other diabetes risk factors, including serum lipids, γ-glutamyl transferase, C-reactive protein, body mass index, and blood glucose levels. When analyzing data from 3 combined cohorts, endotoxemia was associated with elevated levels of VLDL, IDL, and LDL particles, and low concentrations of HDL particles, as well as small LDL and HDL particles, all associated with greater cardiovascular risk. Additionally, in participants with metabolic syndrome, strong correlations were observed between endotoxemia and adverse fatty acid and glycoprotein acetyl profiles.

This latest trial of green tea catechins lends support not only for a potential benefit to patients with metabolic syndrome, but perhaps an additional possible mechanism and target, that of intestinal inflammation. A previously published pooled-analysis of 6 clinical trials found that green tea catechins (540-588 mg catechins in a beverage) improved total fat, visceral fat, and subcutaneous fat levels when compared to a placebo beverage when taken over 12 weeks. Rates of both pre-metabolic syndrome and metabolic syndrome improved with continued consumption, as well as fasting blood glucose and blood pressure. Catechins, like other polyphenols, are likely to have multiple mechanisms of action which support improved glycemic control and cardiometabolic protection, including modulation of intestinal permeability.