Is there a Link Between Thyroid & Depression? 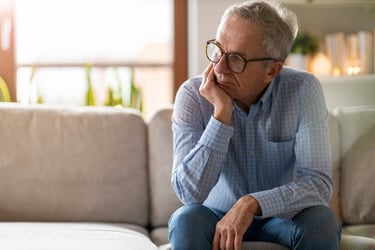 “The involvement of the thyroid gland and thyroid hormones is generally believed to be important in the aetiopathogenesis of major depression. […] Augmentation of antidepressant therapy with the co-administration of thyroid hormones (mainly T3) is a well-documented treatment option for refractory depressed patients.” (Source)

Hypothyroidism brings with it numerous unpleasant signs and symptoms affecting a wide array of body systems. Owing to the role of thyroid hormones in regulating the body’s metabolic rate, it’s not surprising that several of these effects can be considered to reflect an overall “slowing” of energy production: fatigue, low motivation, low body temperature, low heart rate and blood pressure, and constipation (slowed colonic motility). If one views depression as a “slowing” of the mind or emotions, then it’s perfectly logical that depression is listed among the signs and symptoms of hypothyroidism. With this in mind, should patients with treatment-resistant depression be screened for low thyroid?

Indeed, if hypothyroidism (either overt or subclinical) is the underlying cause of a patient’s depression, then it’s understandable that treatment with antidepressants may not have much of an impact unless thyroid hormones are restored to optimal levels. It’s also possible that in at least some cases, optimization of thyroid hormone levels might eliminate the need for antidepressants altogether. After all, if low thyroid is the cause of the depression, then correcting the hormone levels would likely resolve the depressive symptoms.

An intriguing case study reported the experience of a 43-year-old woman with MDD who failed to respond to two different serotonin reuptake inhibitors. It’s possible that her depression might have responded to a different class of antidepressant, but addition of 25mcg of T3 (triiodothyronine) resulted in her feeling well and reporting no further symptoms of depression. The subject had subclinical hypothyroidism: TSH of 8.3 µU/mL (normal range 0.5 to 5 µU/mL) with normal T4 and T3 levels. Unfortunately, the exact T4 and T3 levels were not included in the paper. They were said to be in the “normal” range, but “normal” may be subjective in some cases. “Normal” does not automatically mean optimal. Some individuals may fall at the very low end of the “normal” range yet exhibit numerous signs and symptoms, suggesting that they may need to be closer to the midpoint or higher in order to feel their best.

Debate regarding “normal” versus “optimal” may be why one paper noted that “screening thyroid tests are often routine and add little to the diagnostic evaluation. Overt thyroid disease is rare among depressed inpatients.” As we covered in a past article, thyroid hormone testing is a subject fraught with controversy. It may seem like overt thyroid problems are rare only if it is taken as a given that if someone falls within the conventionally normal ranges (whether for TSH, total or free T4, or total or free T3) that this automatically rules out suboptimal thyroid status. Unfortunately, the laboratory assays used for measuring thyroid hormones may not always be able to detect the true levels: the most commonly used immunoassay appears to be less accurate compared to mass spectrometry, potentially resulting in misdiagnosis or underdiagnosis.

If the upper and lower limits of the “normal” ranges are controversial, then approaches to treatment are no less so. Monotherapy with T4 (levothyroxine) is the most common approach to treating hypothyroidism, but many patients respond poorly to T4-only therapy and have resolution of symptoms only when exogenous T3 hormone is added. A paper exploring the use of thyroid hormones in depression included the following: “Research findings include an association of subclinical hypothyroidism with unsatisfactory responses to antidepressant treatment, evidence that triiodothyronine and thyroid-stimulating hormone may speed recovery in acute depression, and limited and inconsistent support for the effectiveness of exogenous thyroid hormones to augment antidepressants.” The “limited and inconsistent support” for the efficacy of thyroid hormone treatment may reflect the preferred use of T4 monotherapy. For the many patients with poor conversion of T4 to T3, use of T4 alone would not be expected to restore optimal levels of T3, and therefore may not have a positive impact on depression.

A small study of patients with unmedicated major depression found that there were no significant differences in T4 levels between these patients and healthy controls, but those with depression had significantly lower T3 and TSH levels. This finding lends weight to the importance of measuring T3, which is far less commonly done compared to TSH and T4. It’s been estimated that exogenous T3 treatment may be beneficial in approximately 25% of patients with depression—again, most definitely not a small number of people.

A review article found that across six clinical studies, an average of 52 percent of patients with refractory depression showed evidence of subclinical hypothyroidism (range, 29%-100%) based on thyroid hormone testing, thyroid-releasing hormone stimulation, or assessment of basal metabolic rate. The authors noted, “These findings indicate that hypothyroidism is significantly associated with refractory depression, suggesting that this characterizes one biological subtype of refractory depression. Failure to rigorously investigate the effects of thyroid augmentation, including measures of thyroid and beta-adrenergic function, may partly explain the ambiguous results from many treatment studies, and future research should incorporate these measures in the study of refractory depression.”

Hypothyroidism is obviously not always a factor in depression. But being that it may be a contributor—if not the outright cause—in potentially millions of cases, perhaps comprehensive thyroid screening (not just TSH, but total and free T4, total and free T3, reverse T3, and thyroid antibodies) should be a routine part of evaluating patients who present with depression, particularly if the depression does not respond to targeted antidepressant medications. It must also be considered that the “normal” reference ranges may not account for every individual case of suboptimal thyroid levels.

END_OF_DOCUMENT_TOKEN_TO_BE_REPLACED

Lithium (Li) or “lithos” from the Greek word for “stone” was discovered in 1817 by Johan Arfvedson of Sweden. Lithium is...