Is Your Water Bottle Making You Fat? 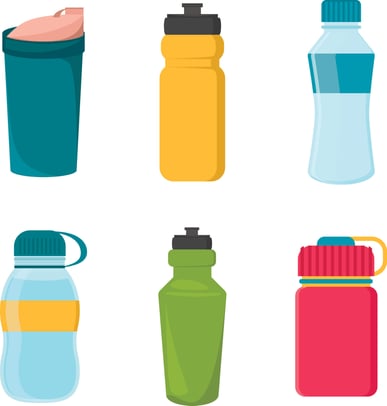 Yes, drinking water is important to our health, but some of the toxic chemicals that accompany each swig might not be. By now, we’ve all heard of Bisphenol A (BPA), an estrogenic compound used to make polycarbonate plastics and epoxy resins, and many people choose BPA-free plastics because of research maligning this trendy toxin with reports of infertility and genetic mutations, but do we fully understand the impact that toxins have on obesity?

When it comes to weight management, the calories-in-calories-out model is outdated. The new conversation needs to shift away from treating the body like a bomb calorimeter (how we measure calories) and more like the complex biological system that it is. Plus, bomb calorimeters cannot measure how the multiplying toxins in our environment contribute to weight gain.

The term “obesogen” was popularized by Felix Grün and Bruce Blumberg of the University of California, Irvine, back in 2006. Obesogens are considered foreign chemical compounds, or toxins, that disrupt normal development and the balance of lipid metabolism. Grün and Blumberg studied the effects of tin compounds used as fungicides, stabilizers in plastic, moluscicides and in other chemical compounds, on lipogenic, or fat-producing, activity.

Grün and Blumber’s study titled, “Environmental obesogens: organotins and endocrine disruption via nuclear receptor signaling,” confirmed that the calories-in-calories-out model might not be the full story. They developed the environmental obesogen hypothesis that suggests xenobiotic chemicals, such as organotins and other environmental toxins, can disrupt mechanisms related to fat production and energy balance. Results showed that higher concentrations of obesogens found in the body were directly correlated to higher fat production, and also weight loss resistance. In other words, not only do obesogens contribute to obesity, they make it very difficult to lose weight even if a person is lowering calories and doing strenuous exercising.

The mechanisms by which these toxins disrupt the body’s metabolism is multi-layered and includes the dysregulation of sex steroid synthesis, disruption in regulation of appetite and satiety, and a reprogramming of metabolic set points. Ironically, many of these toxins accumulate and get stored in fat cells, disrupting the entire adipocyte metabolism and inducing a pro-inflammatory state.

Since the Grün and Blumberg study, the term “obesogen” has begun to appear in the scientific literature and, today, many other toxins have joined the ranks of obesogens, such as tributyltin, diethylhexylphthalate and perfluorooctanoate, with more research surfacing.  BPA and phthalates have been linked to the higher incidence and development of types 1 and 2 diabetes, by affecting insulin secretion in the pancreatic β-cells.

Like weight loss resistance, diabetes might also be triggered by toxins. Psychiatrists have long understood the link between the use of psychotropic drugs and diabetes mellitus, cardiovascular disease and metabolic issues, such as obesity, linking these drugs to lipogenesis. Psychiatrists provide their patients with ongoing weight monitoring accepting that these “weight gain-inducing psychotropic drugs” elicit metabolic dysfunction.

Weight gain might be one way our bodies respond to excessive toxins. Other times, we see a breakdown in cell communication. Effective cell signaling is key to overall health, and some define disease simply as a breakdown in that cell communication. When we introduce the body to an accumulation of toxins, and studies show the average human has over 700 different toxins in the blood, cell signaling becomes is at risk for disruption. Also, the body can misinterpret toxins for biological molecules, rendering devastating health consequences, as in the case when glyphosates are mistaken for glycine.

With obesity on the rise, and more and more people complaining about being unable to lose weight, research continues to untangle the biological web that everyday toxins are weaving. Toxins, no doubt, contribute to the obesity epidemic and, with 80,000 different chemicals lurking in the environment, and 2,300 new ones being added annually, it can feel overwhelming.

Awareness, however, is the first step in changing the weight loss mindset. Rather than focusing solely on the calories-in-calories-out model, we need to change the conversation to how toxins are responsible for disrupting normal cell functioning and creating metabolic dysfunction; and we need to rethink which water bottle we’re using when embarking on a weight loss program.