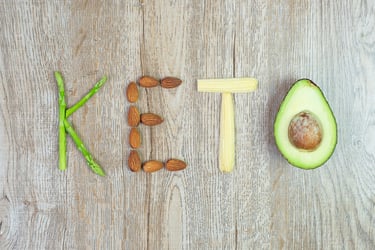 You can’t scroll through social media or stand in a supermarket checkout line these days without being inundated with posts and images related to ketogenic diets. Although this strict form of carbohydrate restriction was originally developed in the 1920s as a dietary treatment for epilepsy, the most common reason people try “keto” now—a century later—is weight loss. But an intriguing body of scientific literature supports the efficacy of keto for a wide range of other issues, such as diabetes (both type 2 and type 1), metabolic syndrome, acid reflux, polycystic ovarian syndrome (PCOS), migraines, non-alcoholic fatty liver disease (NAFLD), hypertriglyceridemia, and even conditions once thought untreatable, such as McArdle disease (a form of glycogen storage disease). However, persistent misconceptions about keto may stop people from even trying this way of eating and reaping its potential therapeutic benefits. It’s time to set the record straight and bust some keto myths.

Just because something waxes and wanes in popularity among the public doesn’t mean it’s a fad. Recognition that cutting back on dietary carbohydrate could be helpful for weight loss goes back to at least 1825, when famous gastronome J.A. Brillat-Savarin explained in the book The Physiology of Taste, that those looking to reduce their girth would benefit from avoiding “saccharine and farinaceous” foods (sweets and starches). A few decades later, in 1863, William Banting penned his famous “Letter on Corpulence,” widely acknowledged to be the first low-carb diet promoted to the public. A century later, George Thorpe (Treating Overweight Patients, 1957), Richard Mackarness (Eat Fat and Grow Slim, 1958), TL Cleave (The Saccharine Disease), Robert Atkins (Dr. Atkins’ Diet Revolution, 1972) and a host of other physicians resurrected the use of carbohydrate reduction for treating obesity and other metabolic conditions. If keto is a fad, it’s a fad that’s been around for almost a century.

Keto social media is peppered with pictures of melted cheese and sticks of butter, and people have taken to putting coconut oil in their morning coffee. But these are not what make a diet ketogenic. In fact, by giving equal emphasis to reducing carbs and increasing dietary fat, the frequently used abbreviation “LCHF” (low-carb, high-fat) may lead people astray when their main goal is losing body fat. Ketosis is a metabolic state induced by consistently low insulin levels, which typically means a very low carbohydrate intake. What facilitates ketosis is the absence of the carbs, not the presence of a lot of fat. Researchers define very low-carb ketogenic diets by their carbohydrate content (either in absolute grams or as a percentage of daily calories), not by their fat content, and not by any particular “macros” or percentages of total calories from carbs, protein, and fat.

3. You have to restrict protein intake.

Since a lower insulin level facilitates ketosis and protein stimulates insulin secretion, it’s sometimes said that people should be mindful of not consuming excessive amounts of protein on a keto diet. There is also concern that the amino acids in protein may have an adverse effect on blood glucose via gluconeogenesis. However, for people following very low-carb diets for the purposes of fat loss and general metabolic health, these concerns are mostly unwarranted. There may be a rationale for limiting protein intake in those who require a certain level of serum ketones for therapeutic reasons, but many people may benefit from protein intakes that are greater than those typically recommended.

From looking at social media, you would think you can’t do keto without a glucometer, meters to measure blood and breath ketones, apps for tracking food, and all manner of other gadgets and gizmos. The truth is, all you need is food that’s very low in carbohydrate. That’s it! People who enjoy logging their food in a spreadsheet and analyzing the data may do that, but it’s not required to be successful with weight loss or improving one’s health. People have been getting great results with low-carb diets for over a hundred years—long before any of this technology even existed.

The above are four of the top myths concerning all things keto. Stay tuned for next week’s blog, where we’ll address an additional three popular keto myths.

Despite its celebrated antioxidant content, the reality is, alcohol isn’t a health food. However, consuming alcohol is o...

END_OF_DOCUMENT_TOKEN_TO_BE_REPLACED

In addition to the well-known role of ketogenic diets for facilitating weight loss and improving type 2 diabetes and met...

END_OF_DOCUMENT_TOKEN_TO_BE_REPLACED

Ketogenic diets are effective for helping with a wide array of health issues. Owing to the avalanche of conflicting info...