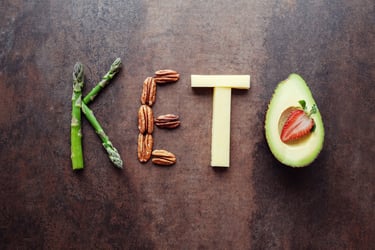 Ketogenic diets have exploded in popularity among people looking to lose weight and improve health concerns related to insulin resistance or dysregulated blood sugar. However, the efficacy of very-low-carb diets doesn’t end with weight loss and metabolic issues. Emerging research suggests that the ketogenic way of eating may have a potential therapeutic role across a broad range of diverse applications, including migraine, gastroesophageal reflux disease (GERD), Parkinson’s disease, binge eating disorder, various mental health concerns, and rare conditions such as McArdle Disease, a form of glycogen storage disease. Another debilitating and difficult-to-treat condition that may be favorably impacted by ketogenic metabolism is lipedema.

Lipedema, first formally described in a Mayo Clinic publication in 1940, is a disorder of subcutaneous adipose tissue growth distinct from ordinary obesity. It may affect as much as 11% of women worldwide (which would be approximately 16 million women in the US) but it is underdiagnosed and often misdiagnosed. It affects women almost exclusively, although there are rare reports of men with lipedema, usually associated with hypogonadism or liver disease and elevated estrogen/estradiol.

Lipedema involves symmetrical, bilateral enlargement of fat on the hips, buttocks, thighs and lower legs, and generally spares the trunk and feet, although around 80% of women with lipedema have involvement of the arms. The fat tissue is nodular, painful, bruises easily, and is called “persistent fat” because it is resistant to reduction by conventional dieting and exercise. The associated pain is just one of the characteristics that distinguish lipedema from obesity, but it’s striking enough that the condition is sometimes called “painful fat disorder.”

Lipedema frequently develops at puberty but can appear at other times of hormonal change such as pregnancy and menopause. There are five types, delineated by the location of the adipose tissue, and four stages classified by increasing severity. Owing to the fact that lipedema fat is subcutaneous and accumulates in a gynoid pattern (hips, thighs, buttocks), women with the condition have reduced risk for medical complications associated with visceral fat storage, such as type 2 diabetes, hypertension, and dyslipidemia.

However, this reduced risk may be of small comfort to affected women. Surveys of women with lipedema indicate that, owing to symptom severity, impact on mobility, as well as cultural stigma, bias and discrimination—including in healthcare, where they are often misdiagnosed with lifestyle-induced obesity and may be subjected to fat-shaming and unnecessary medical interventions—lipedema patients report reduced quality of life, high rates of depression, appearance-related distress, low self-esteem, and social isolation.

The exact cause or causes or lipedema are not known, although as much as 60% of affected women have an immediate family member who is also affected, indicating a genetic contribution. A high prevalence of hypermobile joints has been found in women with lipedema, suggesting a connective tissue disorder, which may affect capillary structure ultimately resulting in fluid buildup in the adipose. Estrogen affects connective tissue (adipose is a type of such tissue), but a causative role for estrogen or other sex hormones has not been identified despite the gynoid pattern of fat enlargement and the undeniable skewing of the condition to females.

Conventional treatments for lipedema include liposuction, compression garments, complete decongestive therapy, and deep tissue therapy, as well as psychological support. A paper published recently in Medical Hypotheses described several mechanisms by which a ketogenic diet (KD) may provide a range of benefits to lipedema patients by addressing multiple features of the condition.

Clinical trials and patient anecdotes suggest that adherence to a KD results in a “profound reduction” of lipedema pain, and being that this improvement may be experienced in as little as two weeks, it appears to be independent of weight loss. (Indeed, KDs have been shown to exert beneficial effects in other conditions independent of weight loss, including reversing metabolic syndrome.) The authors also speculate that if pain is reduced, some lipedema patients may experience improved mobility, which could improve quality of life. Ketogenic diets are showing promise for benefitting those with depression and anxiety disorders, so there may be a rationale for implementing this nutritional strategy to alleviate some of the psychological difficulties of living with lipedema.

Despite the resistance of lipedema fat to reduction by conventional weight loss methods, patient anecdotes from lipedema support groups suggest that KDs have been effective for this. The authors speculate that lipedema “adipocytes may require much lower levels of insulin than other adipose cells for lipolysis to occur, have impaired glucagon sensitivity, and/or be insulin resistant despite the presence of systemic insulin sensitivity.” If this is the case, it may explain why KDs are effective for targeting lipedema fat to some extent, where other types of diets are not. Other possible mechanisms at work include reduced edema and overall fluid retention (KDs induce a natural diuretic effect via lower insulin levels), and decreased lymphatic endothelial cell permeability leading to increased lymphatic transport.

Clinical trials studying KDs in patients with lipedema are limited but interest among the lipedema community is growing as more individuals adopt the diet for themselves and find it to be more effective than other approaches they tried previously for reducing the fat mass and also favorably impacting other aspects of the condition.

In spite of a continued surge in online reading and interest in the ketogenic diet, exactly where are we with this dieta...

END_OF_DOCUMENT_TOKEN_TO_BE_REPLACED

Medium-chain triglycerides, or MCTs for short, are a unique form of dietary fat touted for a number of health benefits i...