Nimativ for the New Year: Build Your 2021 Marketing Calendar

Poor lifestyle choices, including inactivity, reduces the quality of life for millions of Americans. A massive $117 billion is spent annually on healt... 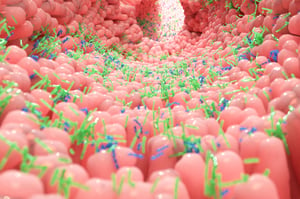 Obesity is a severe health problem the world over, affecting 650 million adults worldwide. Shockingly, over 124 million children are also suffering from obesity. For this reason, researchers have become increasingly fascinated with establishing the key factors that could be altered to reduce this health burden on the global human family.

Isolating the main cause of obesity has been elusive due to the wide range of etiological factors that can contribute to the development of obesity. Recently, the gut microbiota has become a key focus because of the correlation between obesity and the general makeup of the community of microbes living inside the human gut.

The relationship between gut microbiota and obesity has become somewhat of a talking point in the scientific community. In order to correlate published data, a systematic review was recently published in the European Journal of Clinical Nutrition, aiming to establish the differences between the gut microbiota in individuals with obesity, compared to the microbiota of those who were lean.

The first paper written that studied the role of the gut microbiota in the host metabolism and body weight control was published in 2004 by Bäckhed et al. In this study, researchers found that the gut microbiota is an important environmental factor that affects how the body harvests energy and stores it. That was just one of the many papers that were included in the detailed systematic review on the relationship between the gut microbiota and obesity.

Analyzing the gut microbiome is complex due to various environmental and genetic factors, making it difficult to study the observed results and come to concrete conclusions. Interestingly, the microbiota of family members is often more similar than in unrelated individuals. In general, dysbiosis or abnormal microbiome diversity can be a symptom of obesity or illness. Other factors that can alter the gut microbiome are stress and inflammation.

Methods of the Systematic Review

Some 32 studies on the topic were isolated from Pubmed, Scopus, Web of Science, Cochrane library, Lilacs, and Gray literature by searching for the terms: “microbiota”, “microbiome”, “obesity”, “obesity morbid”, and “humans.” The literature was reviewed in line with the “PICOS” strategy - Population (P), Intervention (I), Comparison (C), Outcome (O), and Study design (S).

The rigorous approach that the researchers used ensured that only high-quality trials that looked at both obese and lean gut microbiota in adults were included. Articles written whereby the subject was an animal, child, or where there was a high risk of bias were excluded. Out of 12,496 research articles that appeared in the search, just 53 were found to be eligible and 32 made it into the systematic review.

Just three of the 32 studies that made it into the systematic review found no difference in the composition of the gut microbiota when comparing lean individuals to those with obesity, which means that 90% of the studies identified notable differences in the microbes in the guts of lean and obese individuals. The gut microbiota has long been established (2004 by Bäckhed et al) as an environmental factor that impacts fat storage.

Firmicutes and Bacteroidetes are the main types of bacteria populating the human gut. The remaining 10% are Proteobacteria, Actinobacteria, and Verrucomicrobia. Followed by a smaller quantity of fungi, viruses, and finally Archea. Interestingly Archea are single-celled anaerobic microbes distinct from bacteria - often found in environments that lack a sufficient amount of oxygen. One study included in the systematic review found that there were higher counts of Archae in the obese subjects.

It must be noted that a few studies found the complete opposite - lower bacteroidetes and lower firmicutes. The reason for the vast difference in results is yet to be established. However, the wide range of environmental factors such as season, diet, exercise, drugs, country, and gender are probably factors that determine these differences. Technical differences could also play a role in the observed variance.

This systematic review revealed that the general profile of the gut microbial terrain of obese individuals was as follows:

The gut microbiota profiles of both lean and obese individuals differ. In particular, researchers found that Firmicutes/Bacteroidetes ratio was the most reliable indicator of obesity. The systematic review pointed to the involvement of gut microbes in the development of obesity. This is exciting news that is guiding the way on the use of influencing the microbiome in the treatment of obesity. We are yet to establish clear guidelines on the precise microbiota modulation that will aid in the treatment of obesity, due to the complex nature of the microbiota. Going forward we can expect advances in technology to pinpoint the exact role that each bacterium plays in the pathophysiological process.

In the meantime, it appears that providing optimal nutrition to feed the healthy bacteria that includes fiber, polyphenols, healthy fats and muscle-sparing protein is an appropriate approach to lean towards lean.