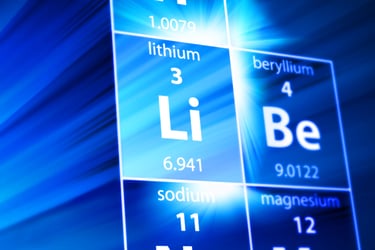 Lithium (Li) or “lithos” from the Greek word for “stone” was discovered in 1817 by Johan Arfvedson of Sweden. Lithium is usually sourced from hard rock mineral mining or extraction from mineral-rich brines. Current literature also explores agro-mining using plants to abstract the trace element from the soil, which accumulates in the above ground parts of the plant.

Lithium is one of several ultra-trace elements required in amounts of less than one mg/day. The lightest metal, it has a very soft silvery-white appearance that is highly reactive and flammable, making it useful not just for mental health but also in the manufacturing of numerous aircraft parts and batteries. From 1929-1950 it was also used in the lemon-lime soft drink “Bib-label Lithiated Lemon-Lime Soda” (aka 7-Up) along with the slogan promoting an improved mood:  “It Takes the Ouch Out of the Grouch”. Unfortunately, lithium has gained a negative reputation since its use is often associated with the book/movie: One Flew Over the Cuckoo’s Nest, psychiatric hospitals, and severe side effects.

Lithium can be found in different amounts in various foods including vegetables and grains as well as smaller amounts in animal byproducts such as eggs and milk. Numerous studies have been conducted and found that water supplies with the lowest lithium content were associated with higher rates of criminal activity and suicide. This means that natural levels of lithium in drinking water may provide a protective effect for people in need of mental health support. This also supports the idea that our health may be influenced by our environment. This microscopic amount in ground water is much different than the much higher (pharmaceutical) doses often used to control manic-depressive disorders, but researchers seem to think tiny doses may have beneficial effects as well and should at least be considered as an option for fostering neuroprotective benefits. While human studies are lacking, animal studies using lithium deficient diets have resulted in decreased reproductive function, lifespan, and lipid metabolism. Animal studies have also found improvement in behavioral and cognitive deficits using lithium in animal models of neurodegenerative dysfunction. A 2014 study suggested that traumatic brain injury (TBI) may be another arena where lithium may be beneficial. They report an exciting potential of lithium in experimental TBI paradigms, “Lithium has been shown to reduce neuronal death, microglial activation, cyclooxygenase-2 induction, amyloid-β (Aβ), and hyperphosphorylated tau levels, to preserve blood-brain barrier integrity, to mitigate neurological deficits and psychiatric disturbance, and to improve learning and memory outcome.”

Unlike other nutrients, the mechanisms of action are a bit of an enigma, but speculated to have effects on several pathways while inhibiting or impacting the function of several enzymes, hormones and vitamins, as well as growth and transforming factors to stabilize mood. One particular enzyme of interest is glycogen synthase kinase-3 (GSK-3). Dysfunction (hyperactivity) of this enzyme has been associated with cell death and the pathophysiology of many neurodegenerative conditions given its role in intracellular signaling. Lithium has been shown to inhibit this enzyme via competitive inhibition of magnesium (which is required for GSK-3 activity) as well as indirectly, resulting in the neuroprotective effects of lithium, including decreased brain inflammation.  Researchers suggest that lithium works by altering signaling pathways and gene expression in the central nervous system; lithium’s benefits usually appear after long-term use. In addition, lithium increases telomere length which helps preserve both physical and psychiatric health – the longer someone is on lithium the more normal the length becomes. Possible explanations for shortened telomeres include childhood stressors, increasing numbers of depressive episodes and relentless anger.  Brain-derived neurotropic factor (BDNF), a neurotrophin essential to proper brain function, is associated with the survival of nerve cells whose expression/ secretion has been shown to be enhanced by long-term lithium supplementation. These examples indicate the possible positive effects low dose lithium has on cognitive function. Low dose lithium has been shown to increase serotonin turnover and enhance serotonin neurotransmission, leading to its use as augmentation along with medication for patients with compromised mood.

While lithium is an often-overlooked element, recent studies have shown beneficial actions that suggest it should be reconsidered as a natural support for mood stabilization and cognitive function.