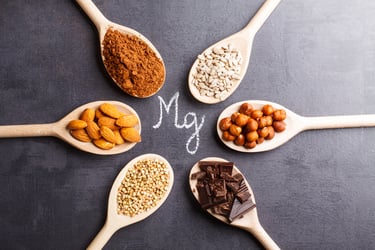 One study looked at 5708 individuals who participated in the Hordaland Health Study in Western Norway where a connection was made between low dietary magnesium and a negative mood. Another cross-sectional study involving 8894 adults found a strong link between magnesium and mood and concluded this link was particularly strong in younger adults.

In a 2011 report, several studies related low magnesium intake to a negative outlook on life. The study also showed that brain magnesium deficiency reduces serotonin levels, and, conversely, some serotonin reuptake inhibitors have been shown to raise levels of brain magnesium. They concluded dietary magnesium greatly contributes to a person’s neurotransmitter levels and, therefore, overall mood.

Magnesium has also been shown to work as an anxiolytic. One study found that supplementing with magnesium can support emotional health. In an animal study, researchers were able to produce anxiety in mice by giving them a magnesium-deficient diet.

In addition to mood and emotional health, sleep quality is also affected by magnesium status. One study found that supplementation with magnesium, zinc and melatonin improved sleep quality and quality of life in general. Another study looked at 46 elderly subjects who were randomly chosen to receive either 500 mg of magnesium per day or a placebo. At the end of eight weeks, those in the magnesium group had improved scores on the insomnia severity index (ISI) when compared to those in the placebo group.

Another animal study appearing in Neuropharmacology found a significant link between low magnesium intake and altered HPA axis function. Magnesium deficiency caused an increase in the transcription of the corticotropin releasing hormone in the paraventricular hypothalamic nucleus (PVN), and elevated ACTH plasma levels.

There seem to be other mood benefits to magnesium, as well. When looking at patients with more severe mood swings, one study found that an IV with a magnesium preparation, named Magnesiocard, had comparable results to lithium in 50% of the patients. Magnesium was also found to improve the mood in PMS patients.

Magnesium is the fourth most abundant mineral in the body and is a cofactor for more than 300 enzyme systems regulating a variety of chemical reactions in the body. An adult has 25 g magnesium, with 50% to 60% of it in the bones. Green vegetables are very rich in magnesium. Magnesium is to chlorophyll what iron is to hemoglobin.

In spite of its ubiquity in the body, few Americans actually get the recommended daily allowance for this essential mineral. Because our bodies cannot produce magnesium, we need to obtain it from diet or supplements.