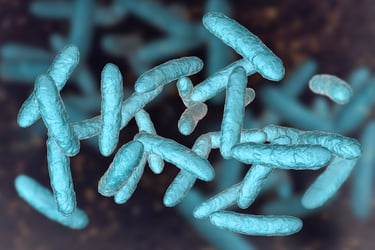 Many factors influence one’s health and whether or not something supports or opposes a healthy inflammatory response is critical. While factors that may increase inflammation such as age and hereditary are out of our control, physical activity, dietary choices, and chemical exposures are within our control. Because inflammation can be at the root cause of many diseases, ranging from cardiovascular to neurological to metabolic, it’s important to downregulate the inflammatory response when we can.

Some have theorized that the interaction between the gut and the immune system can result in either a healthy inflammatory response or chronic low-grade inflammation. Current research suggests that therapeutic benefits may be achieved through dietary manipulation of the microbiota.

One study reported that those with low bacterial richness experienced more inflammatory conditions including adiposity, insulin resistance, and dyslipidemia. In addition, new research exploring a cellular mechanism explaining how good bacteria contribute to gut health shows that the microbiota “interact with both the epithelial cells lining the gut and cells of the immune system to help balance the immune responses and protect the gut from unwanted inflammation.” By manipulating the microbiota to limit intestinal immune responses, they suggested potential therapeutic benefits for conditions (e.g. Inflammatory Bowel Disease) as a consequence of reduced inflammation. The inflammatory response may be downregulated by the cytokine IL-10, an anti-inflammatory molecule that improves regulatory T-cell responses and dampens inflammatory T-cells in order to maintain a balanced response.

While many people know about the benefits of probiotics, we should understand the role prebiotics play in the modulation of the gut microbiota. Both play a role in improving gut health but have a different role. The current definition was updated in 2004 and defines prebiotics as “selectively fermented ingredients that allow specific changes, both in the composition and/or activity in the GI microflora that confer benefits upon host well-being and health”.

These components actually feed the good bacteria in the gut, offering numerous positive health benefits such as reduced risk of disease and inflammation. Enzymatic activity of the gut microbiota is required to metabolize prebiotics into short-chain fatty acids (SCFAs), which are known as both modulators of host metabolism as well as signaling molecules. Butyrate is one example of a SCFA of interest because “it has been shown to have anti-inflammatory properties on microglia and improve memory in mice”. This may help explain the connection between a healthy gut and healthy mind since butyrate inhibits production of damaging chemicals often associated with Alzheimer’s disease.  Researchers believe that dietary fiber can manipulate the inflammatory environment in the gut and that insufficient consumption of dietary fiber may lead to negative consequences related to brain health and inflammation in general, especially in the aging population.

A variety of non-digestible dietary materials can be considered prebiotics, including those occurring in foods such as garlic, Jerusalem artichokes, onions, bananas, apples, flaxseeds, and many more. One mouse study reported that flaxseed fibers protected mice from diet-induced obesity via numerous mechanisms. Since gut microbes consume the same foods we do, improving one’s diet is crucial to improving gut health and reducing inflammation. Consuming omega-3s from cold-water fish, flaxseed, chia, and walnuts not only support gut health, but also improve the omega-6:omega-3 ratio leading to improved composition and function of cell membranes. The Western Diet typically leads to an imbalanced ratio contributing to silent inflammation since pervasive omega-6 fatty acids are pro-inflammatory while omega-3 fatty acids are anti-inflammatory.

One study found that a specific type of dietary prebiotic (inulin-type fructans) had a positive effect on the gut microbiota composition in obese women, decreasing Bacteroides intestinalis and Bacteroides vulgatus with an associated decrease in fat mass. Interestingly, prebiotics may be a fiber, but a fiber is not always a prebiotic. While they target both Lactobacilli and Bifidobacteria, more of the latter are found in the colon, making this bacteria the main focus. The response to prebiotic intervention is also influenced by fiber intake (low or high) at baseline. While beneficial for anyone, those with lower fiber intake experienced an increase in Bifidobacteria while those with higher fiber intake had a greater response and also experienced increased Faecalibacteria along with decreased Coprococci, Dorea, and Ruminococci. This reinforces the necessity of a balanced diet composed of consistent fiber intake.

Of course, managing inflammation requires a comprehensive approach. In addition to dietary changes to influence the gut microbiota, the following considerations should be addressed:

The Connection Between Inflammation and Bone Health

Osteoporosis is one of the most prevalent skeletal system diseases. It causes a decrease in bone mass and microarchitect...

END_OF_DOCUMENT_TOKEN_TO_BE_REPLACED

This weekend marks the unofficial beginning of summer for many in the northern hemisphere. With summer, we get more glor...