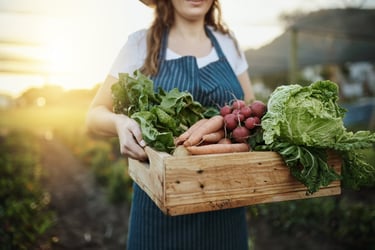 A randomized cross-over study was published in Environment International, evaluating the metabolomic changes that occurred during the implementation of an organic diet over a 40-day period, in nearly 200 children between the ages of 10-12. As an untargeted metabolomic approach, not only did this provide a snapshot of differences in the metabolome between a conventional and organic diet, it also tried not to impose any limitations in determining what those differences might be. Associations were also examined between urinary biomarkers of exposure to specific pesticides, as well as oxidative damage (OD). 3-phenoxybenzoic acid (3-PBA) was used as a proxy for exposure to pyrethroids and 6-chloronicotinic acid (6-CN) as a marker for neonicotinoids, while 8-OHdG and 8-iso-PGF2a were used as biomarkers for OD. It’s worth noting that these researchers previously published a study which found that after a few weeks of an organic diet, these same markers of pesticide exposure did decrease in children, as well as the above biomarkers of oxidative and DNA damage. This more recent study was conducted to get a better understanding of the metabolic shifts associated with an organic diet. Surprisingly, neither study attempted to analyze organophosphate pesticide (OP) exposure, perhaps because many more pesticides are banned in the EU than the US, and both studies were done in Greece.

A number of significant differences were found between the diets, particularly in pathways related to starch and sucrose metabolism, as well as pentose and glucuronate conversions. The organic diet was associated with a decrease in glucose levels and also to increased oxidative stress; for example, gluconic acid, the oxidative product of glucose, was associated with both 8-OHdG and 3-PBA levels. Uric acid levels, which have been previously linked to multiple metabolic abnormalities in children, including hypertension and obesity, were also associated with 8-OHdG levels. Other findings included connections between the catabolic breakdown product of vitamin C and markers of OD, as well as positive associations between sugar alcohols (erythritol and xylitol) and 8-iso-PGF2a and 8-OHdG, respectively. Erythritol has previously been linked to central adiposity and elevated HbA1c levels in young adults. For instance, in a metabolomic analysis of college freshman, those with a baseline HbA1c > 5.05% had a 21-fold higher blood erythritol level those with a lower HbA1c.

Although the findings of this study do not allow for definitive or causal conclusions, it does open the door to possible mechanisms of action not captured by traditional studies. It is consistent with the hypothesis that components of a conventional diet such as pesticides (or a lack of protective compounds present in an organic diet) may trigger excessive oxidative stress, which in turn leads to unfavorable changes in the metabolome, modulating metabolic pathways toward production of more inflammatory and diabetogenic signals.

This study comes on the heels of a metabolomic study done in China, which found associations between serum perfluoroalkyl substances (PFASs) and both dyslipidemia and hyperuricemia. 240 endogenous metabolite markers were each significantly associated with at least one PFAS, even after adjustment for confounders including gender, age, BMI, sampling time, location, education level, cigarette smoking and alcohol drinking history, a remarkable finding. The unfavorable association between PFAS exposure and hyperuricemia was attributed to a “synergistic effect of exogenous chemical residues and endogenous lipid metabolism.” Also striking is the vast number of metabolites and complex analysis required to fully grasp the implications of many of the environmental toxins in our so-called “exposome,” our cumulative lifetime exposure, just a portion of which relates to dietary toxins. Indeed, a new term, the “endobolome,” has been proposed just to capture all of the gut microbiota genes related to steroid metabolism, and how they can be impacted by environmental toxins.

For a sense of this complexity, it is worth reading a recent review of the use of metabolomics in exposome studies. There isn’t space here to include the associations documented in this review, but to name just a few: PFAS exposure and dyslipidemia, diabetes and obesity; persistent organic pollutant exposure and reduced microbiome diversity in nursing mothers; arsenic exposure and type 2 diabetes, etc. This review also notes that while many key endogenous metabolites are found in higher plasma concentrations than environmental toxins, this is not always true. For example, BPA and phthalates are typically found at higher plasma concentrations than endogenous steroids and prostaglandins.

Metabolomic analysis of individuals living in California’s central valley, an area of higher pesticide exposure, has revealed multiple associations between chronic exposure and disturbances in pathways related to oxidative stress, inflammation, lipid and fatty acid metabolism, mitochondrial energy metabolism, and neurotransmitter precursors. Although some categories of pesticides were associated with specific abnormalities (for example, inflammatory pathways related to histidine and arachidonic acid metabolism were linked to both OPs and pyrethroids), disturbances in fatty acid β-oxidation were found for each of the three pesticide classes included for analysis (OPs, organochlorines, and pyrethroids), suggesting at least one common metabolic pathway.

Circling back to organic diets, we know that prenatal exposure to organophosphate pesticides have been associated with neurotoxicity, with a resulting deficit in IQ among children by age 7, and an average 7.0 IQ drop in children whose mothers were in the highest quintile of exposure. NHANES data has previously found that children with levels above the median (of detectable concentrations) of some OP metabolites have nearly double the risk for ADHD, suggesting fairly widespread risk. It also is clear that an organic diet substantially reduces the concentration of these metabolites. This recent metabolomic analysis helps clarify the mechanisms by which these compounds may disrupt metabolic health, and influence health and the risk for disease.