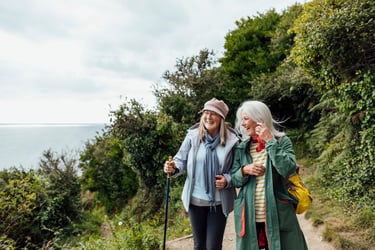 An interesting analysis of nutrition and aging was recently published in BMC Biology, in which the authors used a multi-dimensional modeling technique termed the Geometric Framework for Nutrition (GFN) to assess how the balance of nutrient intakes is associated with the aging process, specifically with age-associated dysregulation. In contrast to what they refer to as the “one variable at a time” approach, here they attempt to more holistically model the complexity of dietary intake with a variety of aging and physiologically-based assessments, potentially providing deeper insight than may be extracted from studies primarily concerned with only one macro or micronutrient at a time.

For this analysis, the authors used data from the Quebec Longitudinal Study on Nutrition and Successful Aging (NuAge), providing data collected over 4 years on over 1,500 men and women in generally good health, who were over age 67 at the study onset. Multiple analyses of this cohort have previously been published, including associations between higher serum omega-3 fatty acids and greater cognitive function, as well as between an even mealtime distribution of protein and muscle strength. Thirty biomarkers were used to calculate scores indicative of global dysregulation, as well as dysregulation within 5 specific systems, such as oxygen transport, liver/kidney function, etc. These biomarkers were comprised of fairly traditional laboratory analytes, with the majority included on a standard CBC or metabolic panel, and did not include any of the “epigenetic clocks” which are gaining traction in aging research. Several measures of “biological aging” were included in the assessment, however, including the Phenotypic Age and Klemera-Doubal methods. The GFN has been described previously; it is an attempt to map out the intersection and interactions of multiple nutrients and other variables, providing insights into the dietary associations with chronic diseases such as obesity as well as aging itself. In this analysis, the focus was on dietary protein, and how it interacts with other nutrients to influence markers of aging.

Among the takeaways from this analysis was that a greater than-average intake of alpha-tocopherol was associated with lower levels of physiological dysregulation. Consuming alpha-tocopherol at 2 standard deviations above the mean (corresponding to just over 10 mg per day) had the greatest benefit for multiple scores, including global physiological dysregulation. Consistent with previous association studies, however, detrimental effects were suggested at very high intakes of alpha-tocopherol (>4 standard deviations above the mean). They also found a relationship between alpha-tocopherol and vitamin C which supports previous findings, i.e., that in isolation, a higher intake of vitamin E may not be as beneficial at low vitamin C intakes, most likely because of the recycling of vitamin E by vitamin C. It’s also worth noting a small double-blind crossover trial which found an increased requirement for alpha-tocopherol among participants with the metabolic syndrome. Given the prevalence of this condition, it’s worth speculating if a benefit to a higher alpha-tocopherol intake may be partly mediated through this mechanism.

Other takeaways were primarily related to macronutrient intake. For example, there was a general improvement in dysregulation scores with a higher-than-average protein intake. In this population, the mean protein intake was 1241 kJ/day (approximately 74 grams per day), and in an unadjusted model, 2000 kJ/day (120 g/d) was associated with the least dysregulation in several scores. This is consistent with previously published recommendations, which suggest that in an older population a somewhat higher than average protein intake may be more beneficial, particularly as it may help to ward off the growing problem of sarcopenia. Indeed, results of a recently published randomized trial found that a higher protein diet had benefits in an older population not only limited to muscle strength, but also included positive changes to innate immune system function, lipid transport, and the blood coagulation system, all of which may help reduce the risk of chronic disease. This does not necessarily apply to a younger population, in which a higher intake of protein, specifically animal protein, has been associated with a greater risk for cardiovascular mortality (though plant protein was inversely associated). In the GFN analysis, very low or very high carbohydrate and very high lipid intake were associated with higher dysregulation scores.

There are many limitations and potentially contradictory findings within this analysis, yet the authors suggest a unique advantage of such an approach. They did not find a “one size fits all” level of macro or micronutrient intake for optimal physiological function, and different dietary patterns were associated with both specific benefits and specific drawbacks. Another way to think about this finding is to recognize that a substantial range of intakes was associated with similar outcomes, i.e., there was a fair bit of room for dietary diversity, outside of extremes. But the advantage of this type of analysis may be to focus more on the individual than on a population basis. For example, identifying specific systems that appear to have more dysregulation/dysfunction in an individual, and then optimizing intakes to address those deficits (while maintaining the overall context of global aging/dysfunction) has significant promise for personalized nutrition. It will be interesting to see future GFN analyses, and application to more aging-specific datasets.

An average adult has two square meters of skin covering their body. Not only is it the largest neuroendocrine organ in t...