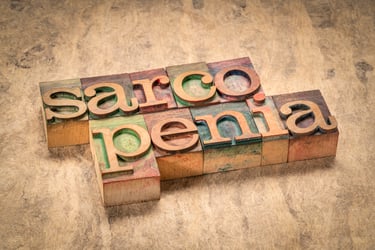 Age-associated sarcopenia, characterized by the gradual loss of muscle mass and muscle strength, affects between 10-27% of older adults and is a progressive and complex disease. Although historically it has been thought only to affect the elderly, this is now recognized to be an erroneous view, with the onset of a decline in muscle mass and quality thought to occur around age 40. Although there are multiple consensus definitions for sarcopenia, the most widely endorsed is by the European Working Group on Sarcopenia in Older People (EWGSOP, updated to EWGSOP2 in 2019), which recommends a simple algorithm for diagnosis which can be found here, and includes the use of the SARC-F questionnaire (low sensitivity but high specificity), assessment of muscle strength with specific cut-offs for grip strength and the chair stand test, muscle quantity/quality assessment via dual-energy X-ray absorptiometry (DXA) or bioelectrical impedance analysis (BIA), and severity determined by measures of physical performance, including gait speed, the Short Physical Performance Battery (SPPB), and the Timed-Up and Go test (TUG).

The previous lack of clear cut-offs and consensus has likely contributed to considerable under-diagnosis, with considerable consequences. Untreated sarcopenia increases the risk for falls and fractures, disability, cardiovascular disease, overall mortality, and a 2-3 fold increase in risk for cognitive impairment. Common underlying causes include nutritional factors, such as low protein or energy intake, inactivity (such as bed rest or immobility), as well as a number of chronic diseases, such as cancer and diabetes. Inflammation, mitochondrial dysfunction, oxidative stress, motor neuron loss, and other factors are all thought to contribute to this complex disorder.

To help with both the prevention and management of sarcopenia, physical activity which emphasizes resistance training is considered a mainstay of practice. Several meta-analyses suggest that resistance training is effective, and improves both muscle strength and mass, even among the very elderly (75 years and older). Unfortunately, it also appears that periods of “detraining” are associated with loss of muscle mass, with more time lost resulting in more loss of muscle mass. This emphasizes the need to keep progressive resistance training as a regular component of lifestyle therapy, as well as the dangers posed by breaks from activity for any reason (i.e., fall recovery, travel, sickness, etc.).

Most dietary approaches to preventing/treating sarcopenia focus on protein intake. While it is clear that a low protein diet contributes to sarcopenia and that the RDA may not be sufficient for older adults, there are mixed findings for a very high protein diet. A greater intake of protein may overcome the greater barrier for muscle anabolism among older adults.  There is a blunting of muscle protein synthesis that occurs with aging, but a higher intake of protein may help to mitigate this impaired synthesis. A recent systematic review and meta-analysis found that while older adults with sarcopenia consume less protein than non-sarcopenic adults, the type of protein and the overall diet may also be relevant. This review found that a greater intake of plant protein was associated with a lower prevalence of sarcopenia, while a high-fat/high-calorie diet appeared to blunt the benefit of consuming a protein level greater than the RDA.

The amino acid leucine is also often suggested to be particularly beneficial, as it stimulates muscle synthesis (by activating the transducer of regulated cAMP response element-binding protein activity 1 (TORC1)), and in a recent umbrella review of nutritional interventions, it was the highest ranked recommendation. This same review also recommended (though at a lower level of evidence) the use of beta-hydroxy-beta-methylbutyrate (HMB) to increase muscle mass, and creatine monohydrate supplementation to increase both muscle mass and muscle strength. A previous meta-analysis of 35 randomized controlled trials found that supplementation with branched-chain amino acids, particularly essential amino acids, to be associated with improved muscle mass and strength in older people.

It is worth noting that a recent systematic review of 17 randomized clinical trials found that leucine alone did not improve muscle mass or strength in an elderly population. However, when combined with vitamin D supplementation, it did have a significant benefit on muscle strength and performance, including improvements in handgrip strength and gait speed, suggesting that this combination should be considered. L-citrulline may also have a therapeutic effect as well; results from a recent randomized and controlled trial found that L-citrulline enhanced the increases in muscle strength (as well as the reductions in fat mass) due to high-intensity interval training (HIIT) among obese older adults.

Given the role of oxidative stress and inflammation in sarcopenia, antioxidant agents as well as those that support a healthy inflammatory process should also be considered. For example, lower inflammatory diets have been associated with lower rates of sarcopenia, and a recent systematic review of 28 studies found that a higher antioxidant intake, greater fruit and vegetable consumption, and supplementation with magnesium, vitamins D and E, and tea catechins were all associated with signs of improved muscle strength and function. Although low mineral intake has been associated with sarcopenia (i.e., low calcium, selenium, magnesium, etc.), these associations are primarily from observational studies, with the exception of magnesium.