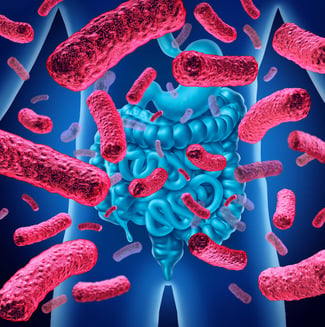 You have already heard about washing your hands, getting plenty of rest, getting your vitamin D and eating a diet rich in antioxidants and various botanicals such as Echinacea, Astragalus, Elderberry and mushroom blends, but what other immune-boosting tactics might be missing from your medicine cabinet? To keep the immune system running strong, there might not be just one magic bullet. However, more and more, research is pointing to the power of probiotics in supporting immune health.

Your colon is an ecosystem containing several pounds of bacteria, which belong there. They remove toxins, keep pathogens in check, and create nutrients that are beneficial to the GI lining and to the rest of the body. According to research appearing in the Proceedings of the Nutrition Society, supplementing with prebiotics and probiotics can also improve antioxidant status, which might one way they help the immune system.

Take Your Probiotics: A double-blind, placebo-controlled study found that probiotics provided the test group with a 53% lower incidence of fever (for the single strain) and 73% reduction for the group taking the combination probiotic. Probiotics also reduced other cold and flu symptoms, including coughing and runny nose. The group taking the supplement also missed fewer days from daycare, 32% fewer days to be exact. Antibiotic use was also less; 68% less in the single strain group and 84% less in the combination strain group. Research appearing in the journal, Vaccine looked at probiotic supplementation and its effect on upper respiratory tract infections (colds and the flu). The double-blind, placebo-controlled study took place during two winter/spring periods. The subjects were 479 healthy adults who were supplemented with a vitamin/mineral supplement containing probiotics (Lactobacilli and Bifidobacteria) or a placebo that contained only the vitamin/mineral supplement. Taking the probiotic did not reduce the number of upper respiratory infections, but it did significantly shorten the duration of the illness (by nearly two days, compared to the placebo group). Also, the symptoms were less severe in the probiotic group. Taking the probiotics also increased the number of immune cells (cytotoxic T plus T suppressor cell counts and T helper cell counts).

Two Newly Isolated Strains: Two newly identified strains called Lactobacillus delbrueckii LE and Lactobacillus rhamnosus LB3, in combination, have been shown to support otolaryngeal health. Clinical testing was performed in the Hospital of Institute of Otolaryngology Academy of Medical Sciences, Kiev, 2002-2006, for State Program “New Probiotics for Otolaryngology”. Strains of L. delbrueckii LE and L. rhamnosus LB3, as well as combination blends, were found to demonstrate high levels of antagonistic activity towards the microbes most frequently found in chronic and recurring ENT infections.

In one study, tonsillar cells from patients with adenoid disease were cultivated with L. rhamnosus LB3. After four hours, L. rhamnosus LB3 had increased the number of cells with membrane antigen CD25 (activated cells), increased the number of IgA producers by 30%, and intensified the functional activity of the natural cytotoxic cells 3.4 times as much.

The specific combination of these strains also demonstrates antagonistic action in relation to a number of ENT pathogens (see Table 1), and help support a healthy immune response in their presence.

O.Volska, D.Zabolotna. Study of the mechanisms of antagonistic activity of the Probiotics. Journal of ear, nose and throat diseases, No3-c, 2003,p.164-165.

This cold and flu season, it’s important to eat a whole foods diet rich in micronutrients, manage stress levels, get plenty of sleep, drink enough water and supplement when necessary with extra antioxidants and botanicals, but probiotics might give that added immune boost you need this season.