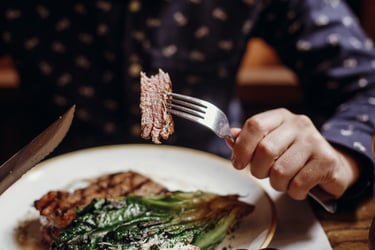 “For a modern disease to be related to an old-fashioned food is one of the most ludicrous things I have ever heard in my life.” -T.L. Cleave

Common sense supports Dr. Cleave’s position that something which healthy, robust humans have been consuming for millennia would be unlikely to contribute to epidemics of chronic illnesses that have begun to plague us only during the last few decades. With this in mind, it’s hard to reconcile the demonization of red meat that has taken place during the same period of time. Obviously, red meat is not required in the human diet. Many millions of people live in excellent health without it. But those who do enjoy it and prefer to include it in their diet need not fear they are harming themselves.

Looked at from a strictly nutritional standpoint, red meat is an excellent source of numerous micronutrients, such as B-vitamins, iron, selenium and zinc, and select cuts of red meat are also rich in nutrients that are conditionally essential, meaning that some individuals may benefit from getting additional amounts of these via their diet rather than relying entirely on endogenous synthesis (e.g., coenzyme Q10, carnitine, carnosine). Each of these nutrients can be obtained from other foods, of course, but it’s puzzling that the public has been advised to entirely avoid or eat only small amounts of something so nutrient-rich.

Much of the fearmongering around red meat is rooted in its saturated fat content, but this, too, is puzzling. For starters, beef tallow contains less than 50% saturated fatty acids, and actually contains about 36% oleic acid—the same monounsaturated fatty acid that is so often celebrated in olive oil. (The fat composition of different cuts of beef and meat and fat from animals raised under different feeding conditions will vary, but overall, beef fat is about 50% unsaturated.) Fifty percent is still relatively high compared to the amount of saturated fat in poultry or seafood, but as we covered in a recent article, saturated fat is not responsible for cardiovascular disease, so even if the proportion of saturated fat in red meat is high, this does not appear to be a reason to avoid consuming red meat.

To the extent that the fatty acid profile of red meat raises any red flags (no pun intended), eating a diet that is higher overall in protein (including from meat) and lower in carbohydrate may offer cardiometabolic protection. This could potentially be augmented by increasing intake of omega-3 polyunsaturated fats relative to omega-6. (Many researchers speculate that a ratio heavily skewed toward omega-6 has played a role in the exploding rates of cardiovascular disease that began in the mid-1900s.) For those who would prefer to limit intake of fat from red meat while still reaping the micronutrient benefits, lean meat is a logical option.

Another major concern surrounding red meat consumption is the purported association with increased risk for colorectal cancer (CRC). This is an extremely difficult thing to tease out and much of the data is epidemiological in nature. Correlations don’t equate to causation, particularly when so much of the information underlying the correlations is based on food frequency questionnaires (FFQs) as opposed to metabolic ward studies where food intake can be meticulously recorded.

The validity of FFQs and other “memory-based” methods has rightly been called into question, with researchers describing them as “fatally flawed,” “inadmissible,” and accusing them of creating a “fictional discourse” on relationships between diet and disease. David Klurfeld, PhD, the Human Nutrition National Program Leader of the USDA Agricultural Research Service, noted, “…critics of meat consumption are firmly convinced that it causes multiple harms despite the softness of data supporting such claims, almost all of which are based on epidemiological associations.” Dr. Klurfeld was a member of the World Health Organization (WHO) working group evaluating the potential carcinogenicity of red and processed meats. Presumably having evaluated a great deal of research in this area, he wrote:

“Despite claims by the World Health Organization (WHO) that eating processed meat causes colon cancer and red meat probably causes cancer, the observational data used to support the claims are weak, confounded by multiple unmeasured factors, and not supported by other types of research needed for such a conclusion.” (Klurfeld, 2018)

Other research echoes this:

“…the state of the epidemiologic science on red meat consumption and CRC is best described in terms of weak associations, heterogeneity, an inability to disentangle effects from other dietary and lifestyle factors, lack of a clear dose-response effect, and weakening evidence over time.” (Alexander et al., 2015)

“…meat or processed meat (in terms of sodium nitrite intake) might not be the main causative factor of colorectal cancer or other diseases. Hence, we should understand that having a balanced diet, which includes meat, is the most important factor for maintaining good health rather than excessive suppression of meat intake to prevent colorectal cancer or other diseases.” (Lee at al., 2021)

Epidemiological surveys are great for establishing “associations,” but these associations may be weak, and again, they do not prove causation. It is virtually impossible to account for—let alone “control for” confounding factors in nutritional epidemiology. If we suspect that fast food meals are among the culprits in obesity and compromised cardiometabolic health, are we to automatically assume that the burger patty is the guilty party while ignoring the corn syrup-sweetened beverages, refined grain buns, and potatoes deep-fried in chemically unstable and easily oxidized vegetable oils?

Pointing a finger—perhaps erroneously—at red meat, may have taken focus away from public health messaging that could potentially be more effective at reducing the burden of chronic cardiometabolic disease, such as encouraging much more limited intake of sugar and other refined carbohydrates: “…an overzealous focus on limiting nutrient and protein-rich unprocessed red meat may have distracted from effective nutrition strategies to address chronic diseases associated with the growing burden of obesity and aging populations” (Binnie et al., 2014).

When health-based arguments fail to uphold a rationale for limited red meat consumption, proponents of this limitation often turn toward a focus on the environment and climate change. Even here, animal agriculture plays only a small role and in fact, can be highly regenerative and restorative to grasslands while increasing biodiversity, improving soil health, and increasing carbon sequestration.

Healthy diets don’t need to include red meat. But people who enjoy it and prefer to continue eating it should not feel pressured to stop or reduce their consumption in the name of good health. Associations between red meat intake and poor health outcomes are weak and highly questionable, while more convincing evidence continues to mount implicating other dietary factors in the growing burden of chronic disease.