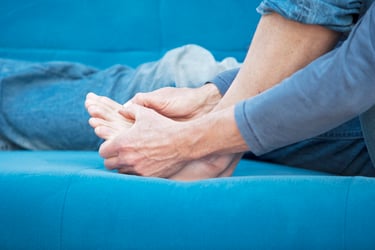 Word is starting to spread that even in people whose blood glucose is within a healthy range, chronically elevated insulin can be a major factor in cardiometabolic disease. Metabolic syndrome and PCOS are the most obvious manifestations of hyperinsulinemia, but a growing number and a widening range of diverse conditions can be added to the list of issues that are caused or exacerbated by this hormonal situation. Let’s explore the connection between chronic hyperinsulinemia and gout.

The pain and discomfort associated with gout results from the buildup of uric acid crystals in the joints. However, like so many compounds that can become problematic, uric acid, per se, is not harmful. It’s an endogenous antioxidant that scavenges free radicals and may protect against DNA damage. Problems arise when the concentration of uric acid becomes excessive and the uric acid precipitates into the crystals that lodge in various soft tissues, most notably in the toes.

If the synthesis of uric acid is a normal biological process and this compound only becomes problematic when the blood level becomes excessive, then it may be prudent to identify and address why the buildup is occurring. Enter the insulin connection.

Elevated insulin inhibits uric acid clearance and excretion. This observation has been made in healthy people and in those with hypertension. The kidneys are especially sensitive to insulin—something easily demonstrated by the effect of insulin on blood pressure: the “anti-natriuresis” action (inhibition of sodium excretion) partly accounts for the role of hyperinsulinemia in hypertension. Elevated insulin increases retention of uric acid as well as sodium.

Elevated uric acid is not included in the diagnostic criteria for metabolic syndrome, but there is a strong association between the two. According to data from over 8000 people, prevalence of metabolic syndrome increased in a stepwise fashion in correlation with serum uric acid (UA) levels. The lowest incidence was 19% in those with UA levels less than 6 mg/dL and this rose to over 40% for levels 7 to 7.9 mg/dL, 62.0% for UA 9 to 9.9 mg/dL, and 70.7% for levels greater than 10 mg/dL. Put simply, the higher someone’s uric acid level, the more likely they were to have metabolic syndrome.

Even if it’s not the mere presence of uric acid, but rather its buildup to certain levels that drives gout, it seems reasonable to take measures to reduce the uric acid load in the body if possible. One source of uric acid is the breakdown of dietary purines. For this reason, conventional dietary recommendations for individuals with gout call for reducing consumption of high-purine foods, such as red meat, organ meats, shellfish and certain other seafoods. Those with gout are also usually cautioned to avoid consuming alcohol—beer and spirits in particular, since wine appears not to have the same uric acid-raising effects as these other forms of alcohol. (The latter fact may not hold for all people, though, as some do experience acute elevation in plasma uric acid after drinking wine.) However, red meat and seafood are among the most nutrient-rich foods in the modern diet. Should these be avoided, or might there be more effective interventions to reduce risk for gout, or reduce frequency and severity of attacks in those who already have it?

Interestingly, evidence suggests higher protein intakes are not associated with increased risk for gout. A paper in The New England Journal of Medicine noted that high-protein diets are associated with increased excretion of uric acid and may reduce blood uric acid level. One small study in Caucasian men with gout showed that a proportional increase in protein intake to 30% of calories (along with other dietary changes such as reduced carb intake [to 40% of calories] and emphasis on unsaturated fats) led to a significant reduction in serum uric acid and rate of gout attacks.

If hyperinsulinemia is a major factor in gout, then dietary interventions to decrease insulin levels may be worth trying for these patients. Many approaches can be effective for this, but very low-carbohydrate or ketogenic diets are especially well known in this regard.

In a small study of overweight or obese subjects, a high-protein diet—actually referred to by name as the Atkins diet—resulted in dramatic decreases in fasting insulin (cut nearly in half) along with lower UA levels, with those with the highest UA concentration experiencing the greatest decrease. Additionally, triglycerides fell by nearly 25% and HDL-cholesterol increased slightly, all indicative of improved insulin sensitivity. The study’s conclusion was clear: “Our findings suggest that the Atkins diet (i.e., a high protein diet without calorie restriction) can reduce SUA levels despite substantial purine loading.”

So it seems that increased dietary protein intake may actually be beneficial for individuals with gout—provided that carbohydrate intake is reduced. In noting that dietary advice for people with gout typically calls for limiting protein and encouraging “the unlimited use of several food substances high in carbohydrate,” the authors of a study cited above concluded, “Current dietary recommendations for gout may need re-evaluation.”

The underlying pathology of elevated insulin in gout is echoed by findings that serum uric acid levels positively correlate with erectile dysfunction, which in some men may come from chronic hyperinsulinemia. Women with PCOS have been shown to have higher uric acid levels compared to controls as well, even after adjusting for BMI. It’s time to recognize that modern dietary patterns are contributing to gout, but not in the way we once may have thought.

END_OF_DOCUMENT_TOKEN_TO_BE_REPLACED

In a recent article we explored the connection between chronically elevated insulin—a.k.a. metabolic syndrome—and benign...