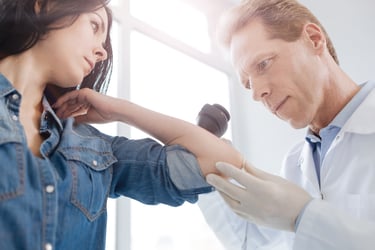 Word is getting out that elevated insulin is a major underlying factor in numerous chronic health issues even when blood glucose is normal. Previous articles have discussed the role of chronic hyperinsulinemia as a primary or exacerbating issue in the pathogenesis of conditions that are not typically thought to be metabolic in origin, such as gout, benign prostate hypertrophy (BPH), erectile dysfunction, and possibly even Parkinson’s disease. From the central nervous system to the reproductive system, there appears to be no organ, gland, or tissue system that isn’t adversely affected by chronic hyperinsulinemia—including the skin. Let’s explore the surprising relationship between elevated insulin and skin tags.

Along with acne, acanthosis nigricans, psoriasis, cellulitis, and hidradenitis suppurativa, skin tags may be thought of as “cutaneous manifestations of obesity and the associated metabolic syndrome.” It’s critical, however, that medical and nutrition professionals understand that chronically elevated insulin and metabolic syndrome are not exclusive to people who are carrying excess weight. These can occur in people with a “normal” body weight or BMI – the diagnostic criteria for metabolic syndrome do not include body weight, nor BMI, nor even body fat percentage. A patient’s body weight should not bias a clinician toward ruling out metabolic abnormalities when they present with otherwise “unexplained” skin problems.

Insulin is often thought to be little more than a “blood sugar hormone,” but its physiological effects are far more wide-reaching than that. Insulin can be considered a growth-promoting anabolic hormone, which is why elevated insulin is so often—though not always—associated with obesity. If insulin promotes growth and enlargement of various tissues, then perhaps it promotes growth of excess skin, ultimately manifesting as acrochordons (skin tags).

Although they may be aesthetically unappealing, skin tags are typically considered benign as a medical issue. However, research indicates that these protrusions are more than just “skin deep” and rather than being benign, they may indicate a more serious underlying problem—namely, metabolic syndrome or carbohydrate intolerance. Skin tags have been described as “a cutaneous marker for impaired carbohydrate metabolism,” and “a cutaneous sign of impaired carbohydrate metabolism, hyperlipidemia, liver enzyme abnormalities and hypertension” – all of which cluster together with insulin resistance.

This is underscored by a study in non-diabetic subjects who were overweight or obese. Over three-quarters (77 percent) had skin tags and the number of these was significantly and independently associated with insulin levels. Being that the subjects did not have diabetes, this reaffirms the notion that it’s not elevated glucose that’s the problem; it’s the insulin. The authors concluded that along with acanthosis nigricans (which affected 97% of patients), “skin tags should be considered clinical markers of hyperinsulinemia in nondiabetic, obese patients.”

Patients who present with skin tags but normal measurements of blood glucose (such as HbA1c and fasting glucose) should be evaluated for insulin resistance. A case-control study of subjects with two or more skin tags found that, compared to age- and gender-matched controls, subjects with skin tags had significantly higher mean levels of triglycerides, fasting glucose, and liver enzymes (ALT, AST, GGT and alkaline phosphatase), as well as lower HDL-cholesterol and higher blood pressure – all of which point toward metabolic disturbances associated with chronic hyperinsulinemia.

Similar findings were seen in a different case-control study that compared three groups of subjects with multiple skin tags to controls matched for BMI, age, and sex. The three skin tag groups were further divided into those with a normal BMI, those who were overweight, and those with obesity. Compared to their BMI-matched controls, HOMA-IR was significantly higher in all BMI groups of skin tag patients – in fact, 71% of them met the criteria for metabolic syndrome. Skin tags are typically associated with overweight or obesity, but here again it can be seen that body weight is not the driving factor in this issue.

Although BMI may not be the main issue in skin tags, researchers did find that a higher BMI was associated with an increased number and greater extent of skin tags. A positive correlation was also found between waist circumference and the number of skin tags in all groups of patients.

“Multiple skin tags may therefore be considered as a diagnostic clue towards the possible presence of the metabolic syndrome. Their presence may help early detection of at-risk patients with the possibility of diagnosis, treatment or even prevention of the syndrome with its sequel. Assessment of HOMA-IR in patients with skin tags is also recommended for early detection of insulin resistance.” (Shaheen et al.)

This cannot be overstated. It’s possible that patients may have few signs of insulin resistance besides skin tags, and as we explained regarding erectile dysfunction in a past article, skin tags may be an early warning sign that metabolic problems are brewing – problems that could eventually worsen into prediabetes and type 2 diabetes (T2D) if not detected and intervened in.

In some individuals, the extent of skin tags may indicate that insulin resistance has already progressed to T2D, even if it hasn’t yet been diagnosed. Based on an oral glucose tolerance test, 23% of patients with skin tags were found to have T2D compared to just 8.5% of controls matched for age, sex, and BMI. A positive correlation was found between total number of skin tags and mean fasting plasma glucose: 52% of patients with more than 30 skin tags were found to have diabetes, but there was no correlation between BMI and number of skin tags. The authors couldn’t have stated it more clearly: “With regard to the importance of early diagnosis of diabetes, we recommend a high level of suspicion for impaired carbohydrate metabolism in patients with skin tag.”

Dermatologists may be uniquely positioned to identify metabolic derangement in patients before it worsens into something with more difficult to treat consequences. Metformin is being used in dermatological practice precisely because of the associations between skin pathologies and disturbed insulin and glucose dynamics. As stated in a dermatology journal, “Being aware of such clinical signs and the underlying systemic disorders may facilitate earlier diagnoses, thereby permitting earlier of therapy initiation and prevention of long-term sequelae. In this process, dermatologists are key figures in the early detection of MetS and its clinical manifestations.”

A host of dietary and lifestyle interventions can be effective for helping with metabolic syndrome and type 2 diabetes. Low-carbohydrate or ketogenic diets are among the most effective, and supplementation with compounds that may improve carbohydrate metabolism and glycemic control (e.g., chromium, berberine, alpha-lipoic acid, inositol) can be used as adjuncts.

END_OF_DOCUMENT_TOKEN_TO_BE_REPLACED

Evidence suggests that diet can significantly alter how the skin responds to sun exposure. The epidermis is a highly reg...