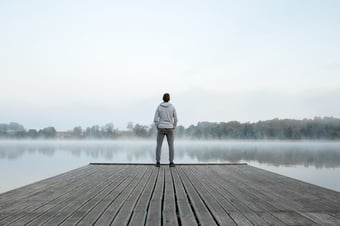 Researchers have been writing about an interesting phenomenon in men, described as a male hormonal equivalent to PCOS (polycystic ovarian syndrome). The main driving factor in PCOS is chronically elevated insulin, with all the signs and symptoms of the condition being explained by the influence of insulin on other hormones and signaling molecules, such as testosterone, follicle stimulating hormone, luteinizing hormone, and sex hormone binding globulin. The “male phenotypic equivalent” of PCOS may include early androgenetic alopecia (a.k.a. male-pattern baldness), erectile dysfunction, and benign prostate hyperplasia (BPH). Let’s take a closer look at this intriguing association between insulin resistance and enlarged prostate.

Insulin is typically thought of as a “blood sugar hormone,” but it has numerous other roles unrelated to lowering blood glucose. It is an anabolic hormone that facilitates tissue growth—an effect seen via its influence on enlarging adipose tissue and playing a role in promoting development of skin tags. The prostate gland is not immune to the growth-promoting effects of insulin.

It’s not known for certain what, specifically, accounts for the association of hyperinsulinemia and BPH, but numerous studies confirm the existence of the link. One factor may be that elevated insulin decreases synthesis of sex hormone binding globulin (SHBG), and researchers have even posited that low SHBG could be a marker of insulin resistance. Lower SHBG could potentially result in elevated free testosterone, with free testosterone able to enter prostate cells, where it’s converted to DHT (dihydrotestosterone) by the 5-alpha reductase enzyme. Another mechanism may be elevated levels of insulin-like growth factor 1 (IGF-1). This is believed to result from insulin reducing synthesis of insulin-like growth factor binding protein-1 (IGFBP-1). IGF-1 may promote enlargement of the prostate. (Lycopene, a carotenoid recognized for its beneficial effects on men’s health, may exert its influence on the prostate by reducing IGF-1 synthesis. The same may be true of saw palmetto.)

Fasting insulin levels have been shown to be positively correlated with the annual increase in growth rate of the prostate gland in men with BPH. Put simply, the higher the insulin level, the faster the growth. The median annual prostate growth rate was higher in men with other markers of metabolic syndrome or cardiometabolic disease, such type 2 diabetes, hypertension, or low HDL-cholesterol. Researchers wrote, “The findings support the hypothesis that hyperinsulinemia is causally related to the development of BPH…” (emphasis added).

Insulin also reduces synthesis of IGFBP-3, a compound that has growth inhibitory effects by binding to and reducing activity of IGF-1. In a study that compared BPH patients to controls, insulin, HOMA-IR, IGF-1, and estradiol were significantly higher, and the IGFBP-3/PSA ratio significantly lower in men with BPH. (Insulin may upregulate the aromatase enzyme, enhancing the conversion of testosterone to estrogen in men.) The study authors went so far as to say that insulin and the IGFBP-3/PSA ratio predict the prostate size in patients with BPH.

It’s important to note that the relationship between elevated insulin and BPH is independent of blood glucose, as the association has been found in men who do not have diabetes. In one study looking at this link, non-diabetic men with BPH were found to have substantially higher fasting insulin, HOMA-IR, and triglycerides, with significantly lower HDL cholesterol compared to controls, and insulin levels were positively correlated with prostate size. It’s critical for medical professionals and patients alike to recognize that type 2 diabetes and metabolic syndrome are just the tip of the iceberg when it comes to chronic disease stemming from metabolic dysregulation. Numerous health issues not typically associated with insulin resistance may be exacerbated or even outright caused by it. It’s crucial to look beyond fasting glucose and even hemoglobin A1c to get a more accurate picture of someone’s cardiometabolic health and insulin sensitivity.

The diabetes drug metformin is commonly used in women with PCOS, so it is telling that metformin and other diabetes drugs are also being studied for efficacy in BPH. In a rodent study in which prostate enlargement was induced by hyperinsulinemia—which is noteworthy in itself—treatment with pioglitazone led to lower insulin levels and lower prostate weight. In another study, metformin inhibited proliferation of cultured human prostate cells, presumably by increasing insulin sensitivity and reducing the expression of IGF-1 receptor, an effect replicated in rodent studies employing metformin in rats with experimentally induced metabolic syndrome. In humans, compared to subjects with BPH but not diabetes, subjects with both conditions who were taking metformin had lower risk for progression to requiring prostatectomy.

It may be time to rethink the “benign” in benign prostate hyperplasia. It can be considered benign in that the growth is not cancerous, but this otherwise seemingly unexplained growth appears to indicate an underlying metabolic dysregulation that should not be ignored.

END_OF_DOCUMENT_TOKEN_TO_BE_REPLACED

Word is starting to spread that even in people whose blood glucose is within a healthy range, chronically elevated insul...