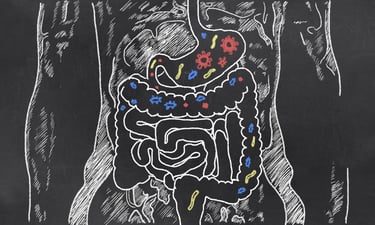 Every day we seem to be learning more and more about the relationship between the gut microbiome and immune health. For example, just last month, researchers discovered that the immune system doesn’t activate at nine weeks into gestation, as previously thought. We now know that the intestinal epithelial cells work to eradicate damaged cells long before our organs develop. (See “Innate Immunity and the Microbiota” below.)

The microbiota and the immune system work closely together to protect the body from disease, while also producing vitamins and creating new healthy tissues. This delicate interplay must be kept in balance with the selection of healthy lifestyle choices.

In this article, we’ll explore the connections between gut microbes and the immune system, how to help them remain in balance, and what it really means to get rid of bad bacteria.

Gut microbes function symbiotically with the immune system, providing balance and health. Alterations in the population of microbes in the gut can lead to immune dysregulation. We now know the critical role of gut microbes and how they have evolved over millennia. The immune system is designed to quickly eliminate pathogens and toxins while creating new healthy tissue. Patients with autoimmune conditions suffer as their immune system falsely identifies healthy tissue as a foreign body.

Innate Immunity and the Microbiota

There are several interconnected systems that work together to provide immunity by removing pathogens and toxins from the body. Importantly, a tolerance to our own bodily tissues and beneficial bacteria must be kept intact to ward off autoimmune conditions. The cells involved in the innate immune system have co-evolved with the microbiota, as detailed below. The essential cells that protect us from diseases are all regulated by the microbiota.

There are five groups of cells involved in the innate immune system:

Note that Gamma delta (γδ) T cells are considered to be the bridge between the innate and adaptive immune system. The microbiota has been found to play a key role in maintaining the function of γδ T cells.

Adaptive Immunity and the Microbiota

The gut microbiota plays an important role in the development of white blood cells, such as T cells. The microbes Clostridia, a class of Firmicutes, are capable of promoting the induction of human regulatory T cells (Tregs). The two key types of cells involved in the adaptive immune system are:

Getting Rid of Bad Gut Bacteria (Hint: It Isn’t What You’d Think)

There isn’t such a thing as “bad bacteria” per se. The term “bad bacteria” refers to bacteria that do not contribute to overall health and wellbeing. What’s important is that the population of bacteria in the gut morphs, depending on the internal terrain. For example, at normal levels candida is fine. Candida is a type of fungus that bursts into action when lifestyle factors are out of balance. For people who abuse alcohol or eat too many sugary foods, however, candida overgrowth can be a serious problem. The reason that candida proliferates in this sort of environment is not that it’s necessarily “bad” or harmful. Instead, the overgrowth is due to an abundance of food that candida likes to eat. In a sense, candida is trying to help.

As we learn more about the complex interplay between the immune system and gut microbes, we can take more decisive action to boost health and wellbeing. Our job is becoming increasingly directed toward boosting microbial health to ensure that all of the systems in the body function effectively. The diet plays a pivotal role in this process, by feeding health-promoting bacteria and helping to reduce bacteria that will proliferate under compromised conditions.

END_OF_DOCUMENT_TOKEN_TO_BE_REPLACED

In an extraordinary analysis published recently in Nature Communications, researchers in Sweden report the results of a ...