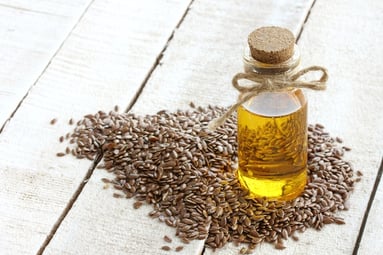 Flaxseed, known as a vegetarian source of omega-3 fatty acids, may also have the added benefit of promoting hormonal health. Although phytoestrogens are similar to estrogen, their role is not completely understood as having a positive or negative influence on women’s hormonal health, particularly those with a history of hormone-linked cancers. However, for women with no health history of cancer, and normal hormonal changes due to aging, flaxseed may offer the benefit of balancing hormones. It does so by providing the essential building blocks for hormone production, thus helping alleviate menopausal symptoms such as hot flashes.

According to Current Topics of Nutraceutical Research, flaxseed helps decrease androgen levels in men and women. Polycystic ovarian syndrome (PCOS) is an example of an endocrine disorder resulting from high levels of androgens. In one clinical case, the hormonal levels in a 31-year old woman with PCOS were evaluated using flaxseed supplementation (30 grams per day). During this four month trial, 83% of the flaxseed dose was consumed---and heights, weights, and fasting blood samples were taken. The results indicated that a decrease in androgen levels and a reduction in hirsutism occurred with the flaxseed supplementation.

Furthermore, Current Topics of Nutraceutical Research indicated that flaxseed also has a dramatic effect on testosterone levels. PCOS patients that participated in this study not only experienced a mean weight loss of 12.4 kg, but also a reported 36% decrease in serum testosterone. In a separate rat study earlier this year, flaxseed extract was shown to increase levels of progesterone, while decreasing levels of testosterone in the PCOS group. Concentrations of estrogen and DHEA, however, did not change significantly. In conclusion, the hormonal profile and features of the ovary disturbed by PCOS improved with flaxseed extract supplementation.

There is also evidence that demonstrates how flaxseed modulates estrogen metabolism in postmenopausal women. According to the American Journal of Clinical Nutrition, endogenous estrogens put forth hormonal effects. In the American Journal of Clinical Nutrition study, effects of consuming the same amount of flaxseed or soy on estrogen metabolism and biochemical markers of bone metabolism in postmenopausal women were evaluated. The research consisted of postmenopausal women that were supplemented with a placebo, soy (25 grams of soy flour), or flaxseed (25 grams of ground flaxseed) for 16 weeks. During this period, blood and urine samples were evaluated for phytoestrogens, estrogen metabolites, and serum hormones. In addition, urine and serum samples were analyzed for biochemical markers of bone metabolism.  The results indicated that urinary concentrations of 2-hydroxyesterone significantly improved. With the flaxseed group, the ratio of 2-hydroxyestrone to 16a-hydroxyestrone was positively connected with urinary excretion. In contrast, the soy and placebo groups showed no significant correlation, change in serum hormones, or biochemical markers of bone metabolism.  This evaluation concluded that flaxseed modulates urinary estrogen metabolite excretion more than soy supplementation.

Additionally, flaxseed’s reputation as a good vegetarian source for omega-3 fatty acids, supporting healthy inflammation pathways, reigns. According to Nutrients, 50-62% of flaxseed oil contains  rich plant source of alpha-linolenic acid (ALA), an omega-3 fatty acid. ALA supports a healthy anti-inflammatory response through the downregulation of the expression of hepatic inflammatory genes in diabetic rats and a remarkable reduction of plasma CRP levels in rats fed with a high-fat diet. Whole flaxseed supplementation has also been shown to mitigate pathophysiology of atherosclerosis in myocardial ischemia rat models through decreasing levels of inflammatory markers. This study also detected sources of heterogeneity according to multiple pre-defined study and population characteristics and found that the type of intervention (p = 0.008), baseline BMI (p = 0.032), and possibly baseline CRP (p = 0.064) contributed to the heterogeneity among studies, and the stratum of obese populations showed significant results in CRP reduction.

Overall, the evidence suggests that flaxseed and its oil provide a wide array of health benefits, including its ability to support healthy hormone levels. As we age, our hormone levels fluctuate resulting in possible imbalances. Hormones control how we eat, cope with stress, and regulate weight management so balance is key.

With its support of healthy inflammatory pathways and, also, hormonal balance, perhaps this tiny seed should be sprinkled into all of our diets.