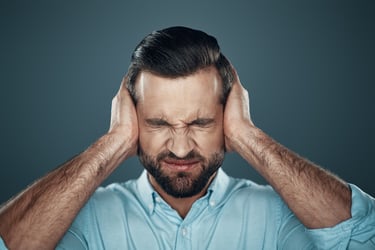 A leaf blower starting and stopping.

The jingling of keys or loose change.

Someone slurping their coffee or smacking their lips while eating.

Many people may feel slightly irritated by these sounds, but what happens when someone feels more than merely annoyed? What if they experience extreme agitation, rage, panic, and an immediate, intense desire to silence the sound or physically escape from it? When reactions to certain sounds are this severe, perhaps the person is afflicted with misophonia.

There’s no formally agreed upon definition of misophonia, but one paper calls it “an affective sound-processing disorder characterized by the experience of strong negative emotions (anger and anxiety) in response to everyday sounds, such as those generated by other people eating, drinking, chewing, and breathing.” “Strong negative emotions” may be an understatement. The severity of the sensitivity can profoundly impact quality of life and is rightly described as “devastating” for sufferers. A slightly more specific description reads as, “intense emotional reactions (e.g., anger, rage, anxiety, disgust) in response to highly specific sounds, particularly sounds of human origin such as oral or nasal noises made by other people (e.g., chewing, sniffing, slurping, lip smacking).”

Each person with misophonia has their own individual trigger sounds, but there are several that are so common as to be nearly universal in those afflicted. These tend to be manmade sounds and many are associated with eating and drinking. Common triggers include “gum popping, food chewing or crunching, nose sniffing, breathing, pen clicking, clock ticking, whistling, lip smacking, and finger or foot tapping.” They may also include mechanical sounds, such as the aforementioned leaf blowers or motorcycle engines, and the sounds of animals, such as dogs barking.

The word “misophonia” translates to “hatred of sound,” but this doesn’t adequately describe the intensity of the autonomic reaction to trigger sounds. According to Paul Dion, an occupational therapist who created the website misophonia.com:

“For people with misophonia, being exposed to a trigger sound creates an immediate negative emotional response. This response can range from moderate discomfort to full-fledged panic and rage. Fight or flight reactions often occur. During a trigger event, a person may become agitated, defensive, or offensive. They may also distance themselves from the trigger or act out in some manner.”

Owing to the prevalence of eating and drinking sounds as triggers, misophonia has been called "mastication rage," but considering the wide range of other triggers, a better description might be “selective sound sensitivity syndrome.” It’s not an official psychiatric or neurological diagnosis, although some have suggested it should be. Despite the seeming oddity of misophonia on the surface, enough people are afflicted by it that the Well blog of the New York Times has covered it at least twice (here and here) and it’s been discussed in articles from The Washington Post and Time magazine. Duke University even has a research center dedicated to better understanding misophonia and developing effective treatments. That a prestigious medical school is taking this seriously should be welcome news for people living with misophonia, as they may be accused of overreacting or “making it up.” But as Mr. Dion explained, “People with misophonia cannot ignore their triggers any more than a person with epilepsy can ignore their seizures.”

Researchers have proposed that misophonia should be classified as a mental disorder – one that may be a subset of obsessive-compulsive related disorders. (It is acknowledged, though, that misophonia’s “cluster of symptoms does not fit any of the well-known obsessive-compulsive or impulse control disorders.”) Others have noted that it occurs independent of other disorders and believe that more research is needed, especially with regard to diagnostic criteria, before misophonia could rightly be included in the psychiatric nomenclature.

No direct cause has yet been identified for misophonia, which of course makes treatment difficult. The condition is unrelated to other audiological phenomena. It’s not the same as hyperacusis, since it’s not related to the volume of sounds. (Moreover, some people with misophonia have this sensitivity blend into something called misokinesia, which involves having visual triggers, such as seeing someone fidget or tap their foot.)

There are no effective therapies for misophonia, except possibly cognitive behavioral therapy. Research findings are heterogeneous and still somewhat sparse. New assessment tests are being developed, but determining whether someone has misophonia doesn’t offer clues as to what they can do about it. (Plus, most people with misophonia are already aware they have abnormal reactions to certain sounds; they just might not know this has a name!)

Researchers are making headway, though. Functional MRI testing showed that upon exposure to trigger sounds, compared to unaffected controls, misophonic subjects experienced “greatly exaggerated blood-oxygen-level-dependent (BOLD) responses in the anterior insular cortex (AIC), a core hub of the ‘salience network’ that is critical for perception of interoceptive signals and emotion processing.” Additionally, the ventromedial prefrontal cortex in subjects with misophonia showed greater myelination, so there do appear to be measurable differences in the brains of afflicted individuals. Researchers concluded that “misophonia is a disorder in which abnormal salience is attributed to particular sounds based on the abnormal activation and functional connectivity of AIC.”

The lead researcher, Dr. Sukhbinder Kumar, from the Institute of Neuroscience at Newcastle University and the Wellcome Centre for NeuroImaging at University College London, said:

“For many people with misophonia, this will come as welcome news as for the first time we have demonstrated a difference in brain structure and function in sufferers. Patients with misophonia had strikingly similar clinical features and yet the syndrome is not recognised in any of the current clinical diagnostic schemes. This study demonstrates the critical brain changes as further evidence to convince a sceptical medical community that this is a genuine disorder.” (Source)

So it seems misophonia is “all in their head,” but not because they’re making it up! Hopefully future research will uncover other possible causes that may point the way toward developing effective therapies.