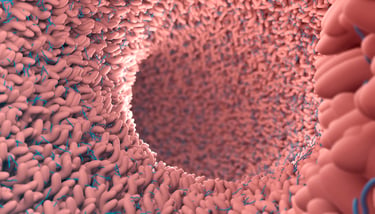 Today, there is an explosion of discoveries associated with the growing understanding of the role of communities of microbes, bacterial species, commensal derived products or metabolites and more particularly of the link between some of these components and disease states in humans.

Scientists and clinicians have a unique opportunity to develop an integrated exploration of human health that includes ecologists, nutritionists, geneticists, microbiologists, biochemists and immunologists. In this multidisciplinary area of research lies the key to fundamental discoveries aimed at manipulating the immune system-microbiota axis.

The human body, including the gut, skin and other mucosal environments, is colonized by a tremendous number of microorganisms, collectively termed the microbiome. The best-studied interface for host-microbiota interactions is the intestinal mucosa. A unique feature of the intestinal immune system is its ability to establish immune tolerance towards an enormous and constantly changing wealth of harmless microorganisms while concomitantly preserving immune responses against pathogenic infection.

Recent advances in microbiome research demonstrate that the gut microbiome is not just a passive bystander, but actively impacts multiple host functions, including circadian rhythm, nutritional responses, metabolism and immunity. The microbiome and the immune system are constantly shaping each other within a dynamic equilibrium of the healthy individual.

The human microbiota interacts at multiple levels with the immune system and the alteration of this crosstalk could be involved in pathophysiological mechanisms of the host that can be exploited to develop clinical therapies for various immunological disorders.

The human immune system encompasses a complex network of innate and adaptive components and plays a vital role in host defense against various potentially harmful exogenous and endogenous triggers. From an ecological perspective, mammals and their commensal microorganisms have co-evolved toward a mutual homeostasis.

Development of microbiome and immunity.

Early-life colonization of mucosal surfaces plays a pivotal role in maturation of the host’s immune system. Most critical events in the education of host immunity may take place during the first years of life, in which microbiota composition displays the highest intra- and inter-individual variability before reaching a more stable adult-like configuration at the age of approximately three years.

Commensal microorganisms are required for the maturation of the immune system, which “learns” to differentiate between commensal bacteria (which are becoming almost quasi-self and tolerated antigens) and pathogenic bacteria. The capacity of the microbiota to stimulate innate responses translates into its important role in the induction of adaptive immunity.  The microbiome displays a remarkable ability to promote and calibrate both innate and adaptive immunity.

Harnessing the microbiota to combat infections represents an important therapeutic avenue with significant results seen in the context of Clostridium difficile colitis. During this recurrent infection, transfer of a microbiota from a healthy donor eradicated the infection with a remarkable efficiency.

Microbiota and innate immunity engage in an extensive bidirectional communication.

All bacteria are able to communicate with each other by signaling molecules, which allow the bacterial cells to sense the environment, monitor population density and to adjust accordingly their gene expression. Through this type of communication, bacteria acquire an advantage crucial for dissemination and survival in highly competitive environments, which harbor hundreds of coexisting species (e.g., the oral cavity, the intestine).

This mechanism of communication regulates the expression of virulence genes in pathogens, with an important role in infection. For example, a relatively low virulence factors production by a limited population of bacteria may promote a robust host response that neutralizes these molecules, while the coordinated virulence factors gene expression by high-density bacterial populations can lead to higher secretion of extracellular factors (60, 61). The produced molecules have also an immunomodulatory effect, controlling the inflammatory response which can induce severe damaging of host tissues (62).

The host-commensal microbiota communication triggers antimicrobial responses from the epithelium including the release of several antibacterial lectins. These antibacterial effectors reduce the amount of potentially pathogenic microbes and provide protection against subsequent abnormal immune responses, often triggering the production of antimicrobial peptides which target other intestinal microbes.

Emerging evidence highlights an important crosstalk between the gut microbiome and the lung. Alterations in the gut microbiome or microbiome-derived metabolites may impact on lung immunity in the context of pulmonary diseases. Gut commensals regulate antiviral immunity at the respiratory mucosa through inflammasome activation upon influenza A virus infection.

A large part of the immune system’s constitutive function is aimed at controlling our relationship with the microbiota. The highest number of immune cells in the body occur at sites colonized by commensals such as the GI tract. In turn, in order to protect their ecological niche, a dominant action of the healthy microbiota on the immune system is aimed at reinforcing barrier immunity and therefore their own containment.

A central strategy utilized by the host to maintain its homeostatic relationship with the microbiota is to minimize contact between microorganisms and the epithelial cell surface thereby limiting tissue inflammation and microbial translocation. In the gastrointestinal tract, home to the largest density of commensals, this segregation is accomplished by the combined action of epithelial cells, mucus, IgA, antimicrobial peptides and immune cells. Collectively these structural and immunological components have been referred to as the “mucosal firewall”.

Commensals can reinforce mucosal barrier immunity, an effect that has the dual function of promoting their own containment and limiting pathogen invasion. In a healthy state, the host’s immune response to the intestinal microbiota is strictly compartmentalized to the mucosal surface.

A single layer of epithelium separates the intestinal lumen from underlying tissues. Many mechanisms are employed to achieve microbiota compartmentalization. A dense mucus layer separates the intestinal epithelium from resident microbes. Disruption of the microbiome affects the immune response of the host and paves the way for disease pathogenesis. Conversely, therapeutic interventions also affect microbial communities for restoration of the mucosal barrier.

Through the colonization of the mucosal entry sites of pathogens, microbiota could directly prevent the invasion by foreign microbes—a process known as colonization resistance (by competing with pathogenic bacteria in the gut for adhesion sites and nutrients, but also by releasing toxic molecules to counteract pathogen colonization), as well as indirectly, through the stimulation of the immune response.

Generally, the anti infectious barrier is efficient when the microbiota is complex and stable. On the contrary, when dysbiosis occurs (due to different causes, e.g., poor colonization, antibiotherapy or an unbalanced, unhealthy diet, etc), the microbiota loses its anti infectious barrier potency and the host can be easily infected with different pathogenic microorganisms from the environment. In addition, some species of microbiota, enriched in the new condition of dysbiosis, can manifest their pathogenic potential by producing opportunistic infections.

Microbiota in and out of balance.

One of the major forms of interaction between the microbiota and invading microbes relates to the need for both forms of organisms to compete for the same ecological niche. Consequently, commensals have been shown to limit pathogen colonization through competition for defined metabolites in a process referred to as colonization resistance. Commensals can also directly and dynamically interact with pathogens and immune cells and the results of this interaction can define the pathogenesis and outcome of a given infection.

The study of mechanistic causal relationships between commensal microbiota and host immunity is strongly informed by the use of germ-free (GF) animal models. Early studies on GF animals demonstrated that absence of commensal microbes is associated with profound intestinal defects of lymphoid tissue architecture and immune functions.

Mechanisms of the microbiome-immune system axis.

While not an inclusive list, the following are several of the more significant mechanisms modulated by the microbiome:

Dietary impact on the microbiome.

The diet has a profound and highly dynamic impact on the composition and function of the microbiota. Therefore, an understanding of the role of diet in immune responses requires integration of the commensal microbiota as well.

Dietary control of immune cells is mediated both by metabolic requirements as well as direct sensing of food- derived metabolites. For instance, metabolite of vitamin A, retinoic acid, that is highly enriched in the gut, can directly control the capacity of lymphocytes to respond to antigen and to migrate to the gastrointestinal tract.

Recent findings have also shown that the immune system may also be able to directly influence nutrient intake. Immunodeficiency can alter the gut flora’s composition and thereby the metabolic capacity of both the flora and the host. This idea may have important consequences for human health not only in countries where malnutrition is a factor but also in the developed world where metabolic syndrome is epidemic.

Significant differences have been noted in the microbial composition of the adult human intestine across cultures with the prototypic Western diet known to be low in fiber predominated by Firmicutes and low in Bacteroidetes, more common in the high-fiber diets of developing countries.

Alteration of nutrient availability by the host microbiota can also have profound consequences on the expression of virulence genes and growth rate of pathogens such as E. coli, or Clostridia difficile. Manipulation of microbial virulence can also occur as a consequence of commensal metabolism. In some instances, the very same metabolites involved in the manipulation of the immune system such as short chain fatty acids can also directly act on pathogens by down regulating the expression of virulence genes. Commensals can also promote the establishment of an environment hostile for pathogen establishment.

The concept that defined metabolites could control unique aspects of the immune system is believed to be a highly generalizable observation extending to all micronutrients explored thus far, including iron, folate, zinc, selenium and Vitamins A, C, D and E.

Western style diets profoundly affect gut microbiome configuration and adversely impact on host immunity. The microbiota plays a fundamental role in the induction, training and function of the host immune system. In return, the immune system has largely evolved as a means to maintain the symbiotic relationship of the host with these highly diverse and evolving microbes.

When operating optimally this immune system–microbiota axis stimulates the activation of protective responses to pathogens and the maintenance of regulatory pathways involved in the maintenance of tolerance to innocuous antigens. However, in high-income countries overuse of antibiotics, changes in diet, and elimination of partners such as nematodes has selected for a microbiota that lacks the resilience and diversity required to establish balanced immune responses. This phenomenon is proposed to account for some of the dramatic rise in autoimmune and inflammatory disorders in parts of the world where our symbiotic relationship with the microbiota has been the most affected.

Recent studies are offering arguments for the use of food to modulate the microbiota and to develop microbiota-based interventional diets. We can target a homeostatic status of microbiota and host health by designing microbiota-based therapeutics, and also by reducing antimicrobials consumption and assuring a diverse and balanced diet for the health of both host metabolism and its microbiota.

END_OF_DOCUMENT_TOKEN_TO_BE_REPLACED

5 Surprising Things that Hurt Your Microbiome

The human gut contains trillions of bacteria – also referred to as the gut flora or microbiome – and these tiny unicellu...