Vitamin A in the Spotlight 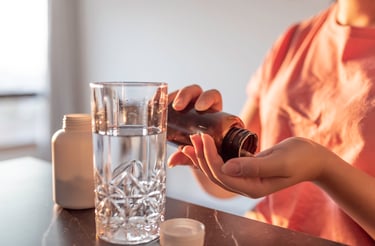 Perhaps best known for its role in supporting healthy eyes, vitamin A has a much larger reach affecting a surprising breadth of processes in the body, including some for which this fat-soluble nutrient wouldn’t be the first to come to mind.

“Vitamin A” encompasses a family of related compounds called retinoids—retinol, retinal, and retinoic acid. Retinal and retinoic acid are the “active” forms. The liver is the body’s main storage site for vitamin A. True vitamin A occurs only in animal foods, as retinol, often together with palmitic acid as retinyl palmitate. Plant foods contain vitamin A precursors such as β-carotene, α-carotene, and β-cryptoxanthin. These are considered provitamin A carotenoids since they can be converted to retinol in the body, whereas other common dietary carotenoids cannot (e.g., lutein, lycopene, and zeaxanthin). It is interesting to note that while certain colors tend to advertise the presence of these carotenoids—the orange of carrots and sweet potatoes, for example—provitamin A carotenoids are also found in foods of other colors, including red bell peppers and leafy greens like spinach and collards. The richest sources of preformed vitamin A include animal livers, cod liver oil, egg yolks, butter, and fortified milk.

One retinol equivalent (RE) is equal to:

These conversions, however, assume ideal physiological circumstances. Hypothyroidism and type 2 diabetes impair conversion of carotenoids to vitamin A, and heavy alcohol intake may interfere with vitamin A absorption and storage. Cigarette smoking, stress, and trauma increase the need for vitamin A.

It may be important to consume at least some amount of animal-sourced vitamin A, because the efficiency of the conversion of carotenoids to vitamin A is limited to begin with and has a large inter-individual variation. β-carotene absorption from plant foods ranges from 5% to 65% in humans. The bioavailability and vitamin A equivalency of carotenoids are highly variable and are impacted by numerous factors related to the foods themselves and to the health status and genetic makeup of the individual consuming them, including genetic polymorphisms that affect carotenoid metabolism. On the other hand, it has been recommended that animal foods alone may not be enough to provide an adequate amount of vitamin A, and that a mix of animal and plant foods should be consumed for this purpose.

In thinking about nutrients required for healthy thyroid function, iodine and selenium likely come to mind immediately. But vitamin A appears to be critical for this as well. Animal models indicate that vitamin A insufficiency may result in increased pituitary synthesis and secretion of thyroid-stimulating hormone (TSH), increased thyroid gland size, and reduced iodine uptake by the thyroid gland. When given alone, even in the absence of increased iodine, vitamin A has had a beneficial impact on thyroid gland function and size. In a cohort of women ages 17-50, including a subset with obesity, who are at increased risk for hypothyroidism, vitamin A supplementation resulted in reduced serum TSH and increased T3 levels. In areas where iodine deficiency is prevalent, vitamin A deficiency appears to influence thyroid status in children with goiter: the more severe the deficiency, the higher the TSH level and the larger the thyroid gland volume.

Another tissue where vitamin A plays a critical role is the skin. Vitamin A-derived retinoids have long been used for acne. It is believed that topically applied retinoids enter skin cells via non-receptor mediated endocytosis. Upon reaching the nucleus, they interact with specific DNA sequences called “retinoid response elements,” which regulate transcription of retinoid-sensitive genes. (Regulation of gene expression is one of vitamin A’s primary roles in general.) Retinoids have a beneficial influence on multiple aspects of skin tissue, including increasing collagen synthesis and reducing collagen degradation, enhancing keratinocyte shedding, increasing epidermal differentiation, and more. The overall results may be increased skin smoothness and decreased roughness, improvements in coarse wrinkles, and less skin discoloration. Retinoids also strengthen the protective function of the epidermis and reduce trans-epidermal water loss, potentially giving skin a more youthful appearance. Vitamin A and related retinoids may be especially useful in wound healing, where they may increase the rate of re-epithelialization and increase proliferation of keratinocytes and fibroblasts.

Owing to the generally increased availability of animal foods, frank vitamin A deficiency is rare in the industrialized world, but it’s not unheard of. Populations at increased risk include individuals with pancreatic insufficiency, malabsorptive conditions, and those who take medications that interfere with fat absorption, as well as individuals who have undergone bariatric surgery. A study that evaluated 170 bariatric surgery patients from medical centers in New York and Brisbane, Australia identified a 69% incidence of vitamin A deficiency. This is especially worrisome because ocular damage may result from low vitamin A post-bariatric surgery, including progression to legal blindness. Adverse consequences from impaired absorption or inadequate intake of vitamin A deficiency may take many years to develop, so it may be advisable to monitor these patients’ nutrient status regularly.