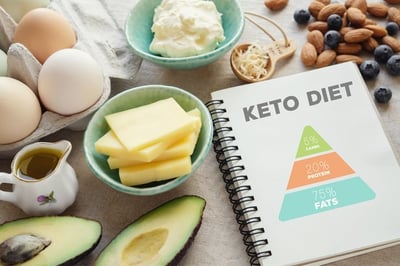 In spite of a continued surge in online reading and interest in the ketogenic diet, exactly where are we with this dietary pendulum swing from the fat-eating fears of the 1980s?

People seem obsessed with the latest diet fads and trends in order to maintain a healthy weight and promote general health. Long-standing research has shown statistics regarding prevalence and outcomes of dieting. Notably, the National Weight Control Registry houses information about this type of ongoing research. More than half of participants of the various studies represented there have used some sort of diet program or plan to aid in their weight loss and maintenance. There are annual reports listing the top diets: The Top 5 Diets to Try in 2018, According to Experts, published by Time magazine, is just one example. The article claims experts have ranked the DASH Diet #1, followed by the Mediterranean Diet, Weight Watchers, the MIND diet, the TLC Diet and Volumetrics as the top diets to try this year. Interestingly, the report comments on the ketogenic diet as being one of the lowest-ranked diets. No details are provided about this diet, but the consensus seemed to be it is difficult to follow.

The ketogenic diet, however, is the one people have been hearing about the most, subtly replacing the paleolithic diet in chatty conversation. We have seen a swarm of information from various sources about the ketogenic diet and even run into friends on the street who are trying it. A common concern about fad or popular diets is that there is no authority on exactly how it can or should be followed, what sorts of problems it may trigger, and for whom it would be appropriate. With eating patterns such as those found in a ketogenic diet, there are often cons such as nutritional deficiencies or lack of efficacy because they are difficult to follow. What’s the solution? How does one weigh (pun intended) the pros and cons when choosing to try the ketogenic diet?

What’s in a Keto?

Let’s start with some background on what the ketogenic diet really is. There are many variations floating around out there… just take a look at the newstands, a bodybuilding website, or even the blogs of practicing clinicians. Designed in 1921 by Dr. Russell Wilder of the Mayo Clinic as a treatment for children with intractable epilepsy, a classical ketogenic diet is intended to shift the body’s tendency to metabolize mostly carbohydrates for energy toward fats for energy. This is accomplished by adhering to a specific macronutrient consumption ratio of 4:1 fat-to-carbohydrates plus protein diet. In this format, fat consists of ~90% of daily calories, along with low protein (~7%) and very low-carbohydrate (~3%). Some alternatives or modifications to this diet with similar affects include a Medium Chain Triglyceride Diet (Fat=70%, Protein=10%,Carbs=20%), a Modified Atkins Diet with more protein (Fat=70%, Protein=25%,Carbs=5%), and a Low-Glycemic Index Treatment (Fat=45%, Protein=28%,Carbs=27%).

The result of eating in this way mimics what occurs in the body when fasting and exercising excessively, and is called ketosis. In ketosis, there is depletion of glycogen reserves in skeletal muscle and the liver, leading to the liver to save the day with production of ketone bodies to be used as fuel. Some experts advise using either ketone strips or a glucose ketone meter to test levels in urine or blood, respectively, in order to check ketone levels. There is even a breath ketone analyzer, available on Amazon. Do not confuse ketosis with ketoacidosis - the potentially deadly state common to Type 1 diabetics when there are extremely high levels of circulating blood glucose and ketones simultaneously.

It goes without saying that following a dietary eating pattern is useful for weight loss, and nutrition experts know they can be used therapeutically for a variety of diseases and conditions. The ketogenic diet has been used for decades to help manage epilepsy, and has gained recent traction in treatment of obesity, type 2 diabetes, cardiovascular disease and neurological disorders. It has even been shown to positively disrupt the gut microbiota.

Research regarding the use of a very-low carbohydrate, high fat diet for obesity treatment is at its infancy. One study retrospectively compared a low-carbohydrate / ketogenic-style diet with a conventional low-calorie diet in bariatric patients, focusing on weight-loss maintenance. The researchers found similar weight-loss between the two diets by 12 months post-intervention. But the ketogenic dieters who received follow-up instruction on a limited carbohydrate refeeding protocol had the greatest success after 24 months, suggesting importance of maintenance with this style of diet.

One masterpiece article from 2008 clearly outlines the advantages of restricting carbohydrates to induce a unique metabolic state that positively affects atherogenic dyslipidemia, fatty acid partitioning and metabolic syndrome. It clearly states that ketone bodies represent an efficient fuel for the body (about 25% more efficient at producing ATP than glucose or fatty acid) with therapeutic potential in a number of clinical states. Following a carbohydrate-restrictive diet may also result in a reduction in release of pro-inflammatory compounds, which has positive implications for cardiovascular health.

On the flip side, another study finds the data on the effects of ketogenic diets on cardiovascular disease too conflicting in animal and human studies to make a solid recommendation.

Recently presented at the 2018 American Diabetes Association conference, a study consisted of a 2-year randomized controlled trial comparing a high-carbohydrate diet to a very-low carbohydrate (similar to keto diet) with low saturated fat diet in type 2 diabetic study participants. Both diets provided similar weight loss and reductions in HbA1c, while the very-low carb diet allowed participants to reduce their use of diabetes management medications, and improve their diurnal blood glucose stability and blood lipids.

One issue many researchers, clinicians, and practicing keto-dieters have determined is this diet can make you feel yucky. There is even a term for it: the Keto Flu. This is primarily due to a shift in electrolyte demand with reduced insulin levels, causing a significantly higher need for potassium, magnesium and sodium. These demands result in nutritional deficiencies of these electrolytes, among other micronutrients, that have consequences not completely elucidated due to the paucity of research on long-term use of a ketogenic-style diet. Sodium is typically over-consumed in a standard diet, and lots of high-sodium foods make their way into a ketogenic diet: cured meats, cheeses, and other processed foods. However, most modern people in Western cultures already don’t get enough magnesium and/or potassium (found mostly in fruits and vegetables), which may play a role in the pathology of chronic diseases such as stroke, osteoporosis and kidney stones.

A 2007 study highlighted the risk factors for kidney stones while following the ketogenic diet. 6.7% of the children who were prescribed the ketogenic diet for intractable epilepsy developed kidney stones. In these cases, the use of potassium citrate significantly decreased the prevalence of the stones and also increased the mean time on the ketogenic diet before a stone was first noted. Potassium citrate solubilizes calcium, thereby decreasing concentrations of free calcium available to crystallize. It also helps to increase urine pH, helping dissolve uric acid crystals. The study concluded that “oral potassium citrate was preventative and that prospective studies using this medication empirically are warranted.”

If you think you really need to try the ketogenic diet, first and foremost, check with your primary care clinician. There are many resources online and in texts that are not all peer-reviewed. Use the information carefully, and listen to your body. Keep in mind the following: this type of diet requires additional understanding of biochemical processes, is difficult to follow due to its limitations and potential lack of palatability, and needs to be limited in duration. Also, depending on one’s genetics, can yield very different outcomes.

That made clear, there are some clever recipes out there to rival those we have seen in the great Paleo rage. One standout resource for the ketogenic diet is the Charlie Foundation website, which was founded to provide dietary information for caregivers of young children with uncontrolled epilepsy. Check out their site for ideas to feed your keto.

END_OF_DOCUMENT_TOKEN_TO_BE_REPLACED

Medium-chain triglycerides, or MCTs for short, are a unique form of dietary fat touted for a number of health benefits i...