YOUR GUT AND YOUR SKIN ARE CONNECTED: INTRODUCING THE GUT-SKIN AXIS 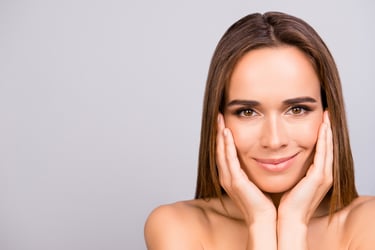 Have you ever wondered by pimples and constipation often come together, or why you break out after eating french fries? It could be because of the gut-skin axis, a concept at the center of an emerging, exciting area of research in Western Medicine. The gut-skin axis deals with the bidirectional relationship between the gut and the skin, two complex immune and neuroendocrine organs that are host to a varied community of microbes, as well as being related in purpose and function.

However, the gut-skin axis is not a new concept. Over 70 years have passed since dermatologists John H. Stokes and Donald M. Pillsbury discovered a connection between mental health conditions and skin issues, and concluded that a gastrointestinal mechanism could be behind it. They hypothesized that emotional states might alter intestinal flora, cause intestinal permeability and create systemic inflammation.

Now, we’re discovering that a complex communication network might exist between the intestinal microbiome and the skin, involving a number of systems, including the immune system, the endocrine system and the metabolic system.

How does it work? Studies have explored the idea that the gut affects the skin via immune mechanisms, as bacteria can have an impact on the action of white blood cells that facilitate anti-inflammatory responses and suppress immune responses. In a more direct way, the intestinal microbiome has also been found to impact skin physiology, pathology and immune response thanks to bacteria’s metabolites, which can find their way to the skin. However, more tell-tale signs of the relationship between the skin and the gut are being found within pathology. You may have come across some of them yourself, or seen the effects in loved ones...

Skin Problems And The Microbiota

A good example of how the connection can be found in pathology comes from research into how altered microbiota affects mice. In a 2018 study, a team of researchers deprived a group of mice of the MAVS gene, which plays an important role in the detection of viruses by the immune system. The affected mice began to show severe allergic skin reactions, but they also had altered gut microbiota. To show the relationship between the skin and gut effects of the genetic changes, the researchers transferred the altered microbiota to normal, healthy mice. Those mice, too, developed severe allergic skin reactions.

A similar connection between atopic dermatitis and an imbalance in intestinal bacteria, or dysbiosis, has also been found. Two Korean studies demonstrated a potential link between reduced beneficial bacteria and atopic diseases, such as eczema. In addition, psoriasis has been linked to dysbiosis. One recent study comparing gut microbe composition in people with psoriasis and those with healthy skin found that the psoriasis patients had different levels of certain bacteria within their guts. A similar study showed that psoriasis patients had both altered bacterial ratios in their gut and on their skin’s surface.

Acne vulgaris is now also thought to be affected by the metabolites produced by gut microbiota, and vice versa, thanks to a positive feedback loop of metabolic inflammation that could involve the brain (Stokes and Pillsbury were right all those years ago: the brain does communicate with the gut and the skin!).

The Role Of Probiotics On Skin Health

How can probiotics affect the beauty and health of your skin? Well, it has been shown that probiotics may regulate the release of inflammatory signalling molecules that are often elevated in people with skin conditions.

Additional studies show that probiotics may promote healthier skin, decreasing skin sensitivity and inflammation, increasing hydration and flexibility, and improving its stress response. What’s more, probiotics such as Bifidobacterium breve may have the potential to protect the skin from sun-induced damage.

Could you skin health improve as you improve your gut health? Only experimentation will reveal the answer!

END_OF_DOCUMENT_TOKEN_TO_BE_REPLACED

Many factors influence one’s health and whether or not something supports or opposes a healthy inflammatory response is ...