Beet Your Way to Health 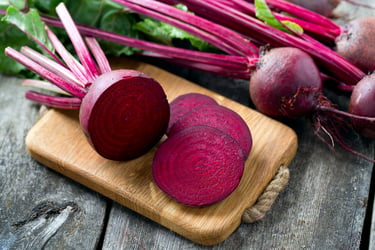 Red beetroot (Beta vulgaris rubra) has been gaining popularity as a functional food that has potential to prevent disease and promote health. Beets belong to the chenopod family along with other foods such as chard, spinach, and quinoa. They have been used throughout history as a treatment for numerous ailments, and still evoke an emotional response from people who either love them or have an intense dislike for them. According to research, beetroot is being considered in the treatment of pathologies related to oxidative stress, inflammation, detoxification, cognition, and endothelial function. The betalains are not only what give beets their red color but also function as antioxidants and anti-inflammatory molecules. Beets are a great source of fiber, folate, manganese, potassium, Vitamin C, and nitrates. Unlike nitrites found in processed meats which are not healthy, nitrates found in beets are responsible for the health promoting benefits they provide. When beets are consumed, oral microbiota reduce dietary nitrate (NO3-) to nitrite (NO2-) where some of it is reduced to Nitric Oxide (NO) in the stomach and absorbed into circulation. Interestingly, spitting out saliva or using oral anti-bacterial mouthwash reduced the nitrate-nitrite conversion.

By increasing beetroot consumption, the body has a natural means to increase in vivo NO availability which relaxes and widen blood vessels, supporting blood pressure regulation.

According to the Centers for Disease Control and Prevention (CDC), high blood pressure increased the risk for heart disease, stroke, chronic kidney disease, and is associated with more than 1,100 deaths per day. While hypertension is a major risk factor for cardiovascular disease, it is also one of the leading preventable causes of premature death and disability. Numerous studies have suggested the beneficial effects of beetroot for cardiovascular health. A 2013 Meta Analysis reported that inorganic nitrate and beetroot juice supplementation was associated with a significant reduction in systolic blood pressure. Since hypertension accounts for $48.6 billion each year from medications, missed days or work, and health care services, beetroot should be considered as an easy and inexpensive dietary intervention and component of healthy lifestyle interventions to control blood pressure levels. Based on the results of a study at the British Heart Foundation, researchers suggested that daily intake of inorganic nitrate can be as effective as medical intervention in reducing blood pressure. Betaine supplementation has also been shown to be effective in reducing plasma homocysteine levels. This is important since a high level of homocysteine is a risk factor for heart disease. According to researchers, “The homocysteine-lowering effects of betaine can most likely be ascribed to an increase in betaine- dependent methylation of homocysteine into methionine due to increased betaine availability and enhanced activity of the enzyme BHMT in both the liver and kidney.”

Research also points to numerous other benefits of using beets to improve the following:

Some simple ways to prepare fresh beets include grating raw beets into a salad, sautéing the beet greens for a side dish, juicing them in a drink, or steaming then marinating the beets with extra virgin olive oil, lemon juice, and fresh herbs. Also consider beets in a wide array of foods to provide a natural red color loaded with other benefits. Of course, don’t be alarmed if you incorporate beets into your diet and your urine turns red, this is a (harmless) common side effect called beeturia. In addition, those prone to kidney stones or gout should eat beets with caution since they are high in oxalates.

Our central hub, the brain, is made up of billions of neurons that communicate to other parts of the body in order to ca...