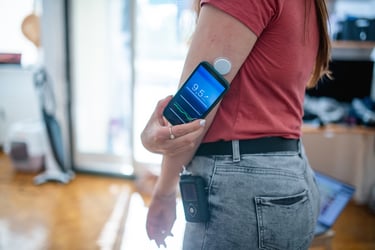 “I am shocked at how current dietary guidelines seem to totally miss the mark and have not caught up with the simple idea that high glycemic index foods should be largely avoided. I don’t think that most people think in terms of how what they eat affects their blood glucose, but this seems foundational to me now.” -Medical student (quoted in Norwitz et al., 2022)

Wearable devices for biohackers, data lovers, and people who are simply interested in health optimization have spawned an entire industry that didn’t exist only a few years ago. There are step counters, rings that assess sleep, trackers that monitor heart rate variability, and more. Something poised to be a gamechanger for personal health empowerment is the continuous glucose monitor, or CGM.

Use of CGMs is gaining popularity among the lay public and healthcare professionals alike. Compared to the more commonly used fingerstick glucometers, CGMs provide far more insight about how individuals respond to meals and other factors that affect blood glucose, owing to the more constant measuring inherent to these devices.

CGMs are typically inserted into the back of the arm or on the belly, where they are unlikely to be disturbed by most normal activity. Unlike conventional glucometers, which measure the glucose level in capillary blood, CGMs measure glucose in interstitial fluid. This means that CGM and glucometer readings may not always match up, but the general trends—whether glucose is rising or falling, and the ballpark level—should be similar. (Readings on a CGM will lag behind a fingerstick blood measurement by about 5-10 minutes.) Data is typically transmitted every five minutes, 24-hours a day, to a phone or other device and can also be synced with a physician’s office for medical monitoring.

CGMs offer numerous advantages over conventional glucometers. The most obvious is that they’re less time-consuming and tedious, since the sensor is inserted just once and can be worn for two weeks. Insertion is nearly painless and there are no additional needles, alcohol swabs, or lancets needed. Patients may be more inclined to use CGMs compared to glucometers, which are more cumbersome and may interrupt daily routines more.

Another major advantage is that because CGMs take measurements every five minutes, they can show the volatility in glucose excursions that would not be reflected in a hemoglobin A1c (HbA1c) test, nor in glucometer measurements taken at larger intervals, such as 60 or 90 minutes after a meal or a few times a day. A previous article covered the multiple shortcomings of the HbA1c test. Data from a CGM could confirm whether the HbA1c is truly reflective of an individual’s normal blood glucose levels, or whether it appears artificially high or low due to factors discussed in that article.

The near-real-time data can help patients identify connections between absolute blood glucose levels, degree of volatility, and various aspects of their physical and mental wellbeing. For example, in some individuals, feelings of anxiety, irritability and panic may not be “all in their head,” but could be the result of rapidly falling blood glucose. (These hypoglycemia-associated symptoms may not be reflective of overtly low blood glucose, but rather, of the rate at which glucose falls from a previously higher level.) They may also be able to make associations between dips in energy or cravings for sugar and other refined carbs based on their glucose level, which would help them make better dietary choices.

CGMs also provide closer to real-time data on other factors that affect blood glucose other than foods and beverages consumed. Intense physical activity (such as a high-intensity workout) and acutely stressful situations may trigger elevations in glucose independent of food consumed, and poor quality sleep is known to affect insulin sensitivity and glucose tolerance, even being a risk a factor for developing diabetes. Glucometers can provide information about the impact of these lifestyle factors on glycemic control, but CGMs give more data and may be more useful for identifying patterns and trends.

Recent research supports the use of CGMs for the purpose of educating patients and determining more individualized dietary recommendations. A paper published in August 2022 profiled an intriguing project in which medical and dental students from Harvard University wore CGMs for 30 to 40 days. Below are comments from some of the participants when asked about the impact of wearing a CGM on their own eating patterns:

“This experience has definitely changed my eating habits—after seeing how avoiding rice and carbs in general curbed my glucose response, I was more inclined to eat low-carb meals for lunch and dinner… I think my definition of ‘healthy eating’ now includes a sense of foods’ glycemic indices and their associated glucose spikes in a way that it didn’t before.”

“I have also sought to decrease by simple carb intake, as I found that I had dramatic glucose spikes, and subsequent fatigue, when consuming large amounts of simple carbs.”

When asked about their opinion of dietary advice typically given to patients:

“I already knew before I started this experience that we are giving extremely flawed advice to patients. The dietary guidelines are cookie-cutter, high carb, and low fat. This does not work for most people. When it fails, many times, the clinician would blame the patient instead of the guidelines. It’s simple and convincing to believe in calorie in and calorie out, but like many aspects in medicine, that is just too surface-level.”

“I am still disappointed, at best, with the standard medical dietary advice. This experience has highlighted how much improvement needs to be made.”

One participant noted, “…the medical system does not really have faith in patients to adhere to a diet plan, which likely leads to complacency in the quality of advice that is given. Ironically, it may be the incomplete advice itself that generates some of the failure to adhere to diet plans.”

This echoes a sentiment that was expressed in a 2015 study in which continuous glucose monitoring was employed in 800 subjects over nearly 47,000 meals. Findings revealed a shocking amount of interpersonal variability in response to the same foods, which suggests that the glycemic index of a food is not a static property inherent to the food itself, but rather, is dependent on how an individual’s body reacts to that food. The lead author of the study noted:

“There are profound differences between individuals—in some cases individuals have opposite response to one another and this is really a big hole in the literature. […] After seeing this data I think about the possibility that maybe we’re really conceptually wrong in our thinking about the obesity and diabetes epidemic. The intuition of people is that we know how to treat these conditions and it’s just that people are not listening and are eating out of control--but maybe people are actually compliant but in many cases we were giving them wrong advice.” (Emphasis added.)

If someone adheres to a diet but fails to get the expected results, perhaps the problem is not with the individual, then, but with the diet itself. And if someone doesn’t adhere, often that’s precisely because the desired results aren’t coming, so who could blame them for abandoning the program? In these cases, rather than “blame the patient,” CGM data could be used to tailor dietary advice to each individual, ensuring that foods that cause large and sustained glucose excursions are simply not on the menu.

The CGM experience may influence the way medical students practice medicine. Here are two responses when students were asked about this:

“I will definitely be thinking about the ways that a CGM could help my patients. Especially those that are struggling with weight or energy throughout the day. [Observing] the graph of what my sugars were doing when I was feeling tired was very informative for what I was consuming and think that it could help my patients too!”

“I definitely think [having worn a glucose monitor] will impact the way I practice medicine. I learned that nutrition is not a cookie cutter science (is any part of medicine, really?) and it needs to be extremely individualized. I would not hesitate to recommend the CGM to my patients so they can learn how their body reacts to different foods.”

CGMs can be an instrumental part of a partnership between doctors and patients. For example, as discussed in a past article, patients with diabetes who adopt low-carb or ketogenic diets may need to have their medications adjusted within days of starting. A CGM can give them and their doctors data to guide medication reduction and elimination—something that can be done as quickly as is needed, rather than waiting for a 3- or 6-month office visit.

CGMs can also be used in remote monitoring for support and accountability. A small study in which subjects with obesity, diabetes or prediabetes used CGMs to help guide dietary intake had impressive results: over six months, all subjects lost weight (mean decrease of 38 pounds), there were significant improvements in HOMA-IR and systolic blood pressure, mean HbA1c dropped from 7.1 to 6.0, and the 10-year risk of a major cardiovascular event decreased from 9.22 to 5.18% (a relative risk reduction of 44%)—all while reducing or eliminating various drugs for diabetes, hypertension, and lipid lowering. The intervention included close contact with the supervising physician and a team of health coaches, so CGMs were only one facet of the program but they likely contributed to adherence and personalization.

Not everyone has easy access to a CGM. In order for these to be covered by insurance, a prescription is required, and reimbursement is typically only available for patients with diabetes or prediabetes. However, there are private companies that offer CGMs for those who are willing to pay out of pocket.