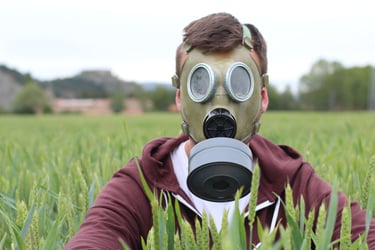 Glyphosate [(N-phosphonomethyl) glycine] (GLY) is the most widely used herbicide worldwide. First introduced in 1974, it sells under the brand name, “Roundup”. Since 1996 and the introduction of “Roundup Ready” crops (genetically modified crops resistant to heavy application), glyphosate use has increased approximately 15-fold. It kills broadleaf weeds and grasses and is most-known as a weed killer for commodity crops such as soy, corn and canola.

While organizations have considered it harmless, recent research indicates that the accumulation of GLY in water and the environment may lead to numerous health hazards. Since glyphosate is water soluble, it has been found in all types of water sources. This includes rivers, oceans, drinking water, and even rain. Exposures may occur through drinking water contaminated with glyphosate, breathing it in, eating foods treated with it, or absorbing it through the skin. Studies have suggested that GLY may lead to dysbiosis, which contributes to numerous health concerns. A major concern, however, is that scientists are lacking diagnostic strategies to detect glyphosate and its byproducts. Researchers studying the methods, needs, and challenges of glyphosate detection stated that “most of the technologies require high-end equipment and resources in low throughput, and none of them are adequate for real-time field tests.” It has also been suggested that to quantify environmental and health impacts from glyphosate more data is needed but these data are rarely available. The data required include: “the land area and crops treated; the timing and method of applications; rates and number of application; the formulation applied and the total volume applied per hectare.”

A 2019 study concluded that it is challenging to fully understand the extent of overall exposure and recommended further research across different populations and geographic regions while taking into account exposure from occupational use, household use, and food residues.

Recent research looked at the carcinogenicity of glyphosate and attempted to rectify the difference between the International Agency for Research on Cancer (IARC), which found that glyphosate is probably carcinogenic, and the European Union (EU) renewal process, which found the substance to be safe. The authors found, “Use of different data sets, particularly on long-term toxicity/carcinogenicity in rodents, could partially explain the divergent views; but methodological differences in the evaluation of the available evidence have been identified.”

Because various reviews and international assessments have come to different conclusions, a research team at the University of Washington examined epidemiologic studies published between 2001 and 2018. They published the findings in the online journal Mutation Research/Reviews in Mutation Research where they found exposure to glyphosate increased the risk of some cancers by more than 40 percent. Other research found glyphosate to be teratogenic. (A teratogen is an agent that can disturb the development of the embryo or fetus. Teratogens halt the pregnancy or produce a congenital malformation/birth defect.) Enough research links glyphosate use and health problems to give us pause and compel us to find a solution.

No doubt many consumers are appropriately concerned about glyphosate, but how do we trust products claiming to be “glyphosate-free” when these glyphosate-free standards set by the Environmental Protection Agency (EPA) are so low. In other words, does the term even have significance given the regulatory body defining the standards continues to defend its safety. The EPA has established tolerances for glyphosate on a number of crops, including corn, soybeans, grains, fruits and vegetables. These range from 0.1 to 310 ppm. Although the FDA has yet to release results from its expanded glyphosate testing program, it claims that “preliminary result for glyphosate testing showed no pesticide residue violations in the commodities tested.”

As recent as April 2019, the EPA released what was called the Glyphosate Proposed Interim Decision for public comment and stated they continue to find no risks to public health when glyphosate is used in accordance with its current label. However a 2017 article in the Journal of Epidemiology and Community Health stated their concerns “that the assays used to assess glyphosate safety, including the toxicity studies requested by the US Environmental Protection Agency (EPA) in 2009, may be insufficient to address the full complement of health effects that could be induced by exposure to glyphosate-based herbicides (GBHs).”

Considering a basic principle of toxicology which says that “the dose makes the poison”, short term exposure may not in itself be dangerous, but animal and human studies suggest that chronic exposure to glyphosate-based herbicides can induce adverse health outcomes.

One study reported on glyphosate’s influence on Celiac disease and reported that “All of the known biological effects of glyphosate – cytochrome P450 inhibition, disruption of synthesis of aromatic amino acids, chelation of transition metals, and antibacterial action – contribute to the pathology of celiac disease.” Results of another study reported that in the 1990s, 12 percent of the samples had detectable levels of glyphosate compared to 70 percent by 2016. While concentrations were below daily exposure limits, experts believe the accumulative effects of chronic exposure cannot be ignored.

The USDA Certified Organic label is one way to ensure foods are grown to a standard that addresses weed and pest control; this includes soil that has had no prohibited substances applied for three years prior to harvest. Prohibited substances include most synthetic fertilizers and pesticides. However, it is important to note that the widespread use of glyphosate means it can still contaminate organic crops even when it is not directly sprayed. The Detox Project advertises its Glyphosate Residue Free Certification process where products are tested by third-party ISO certified laboratories using low detection liquid chromatography tandem-mass spectrometry (LC-MS/MS).

Still, there are concerns for safety, especially since genetic modification of some plants is enabling agriculture to use glyphosate liberally without harming the crops. Currently, glyphosate is undergoing a registration review, a program that re-evaluates all pesticides on a 15-year cycle.

How can we avoid glyphosate? Perhaps the better question is how can we reduce exposure over the short and long term? One obvious answer is to avoid using glyphosate. Choosing organic foods, avoiding GMO foods, and growing and cooking one’s own food are some practical ways to control and reduce exposure. Since glyphosate is ubiquitous, supporting detoxification pathways may help minimize the negative effects of exposure.